Did you know that you can cut paint chips with your Silhouette machine?? I know, so cool! Here I’ll walk you through how I turned a stack of free paint chips from a previously abandoned project into a DIY holiday banner….and a greeting “card” surprise!

How to Cut Paint Chips with a Silhouette & Make a Banner 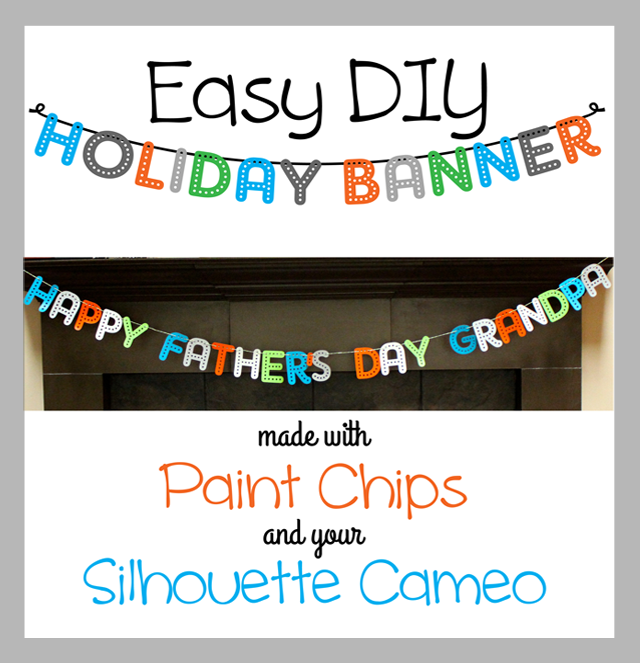 I’ve had this stash of paint chips just taking up space in a drawer for the past year and a half.  I had originally grabbed them from Home Depot while I was in full-blown Operation Nursery Planning, and I had every intention of making a mobile to hang above The Cub’s crib….but time got away from me.  There is and never was a mobile in The Cub’s nursery.  Sigh….  Oh wells.  But all is not lost, because I am just going to use them with a new project here! 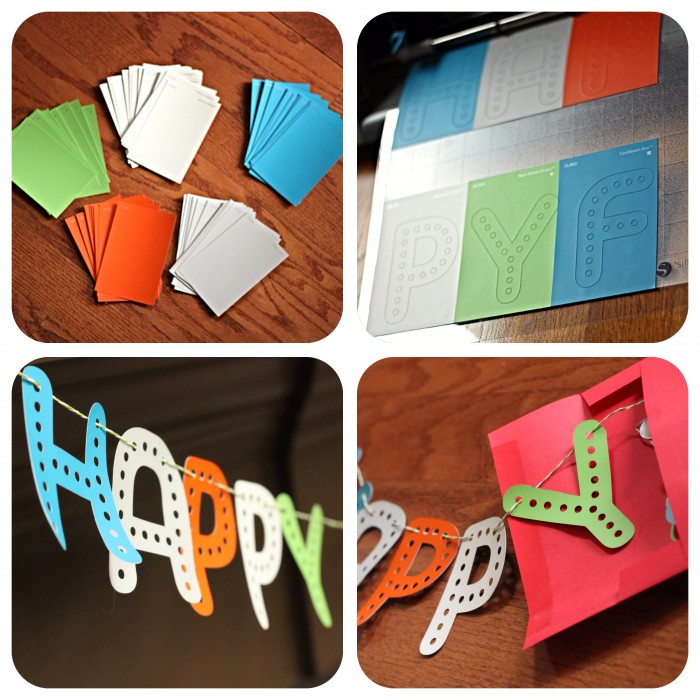 As you can see, I had little stacks in five different colors that are the colors of The Cub’s nursery, and they’re “manly” enough for Father’s Day fun (the bottom right stack is actually a mid-shade of gray, although it looks much whiter in the pictures).

They have the brand and paint information on the backside obviously, but since both Grandfathers work in the construction business, I didn’t think they’d mind and all.  They’ll probably get a kick out of it….and admire my frugality as well. 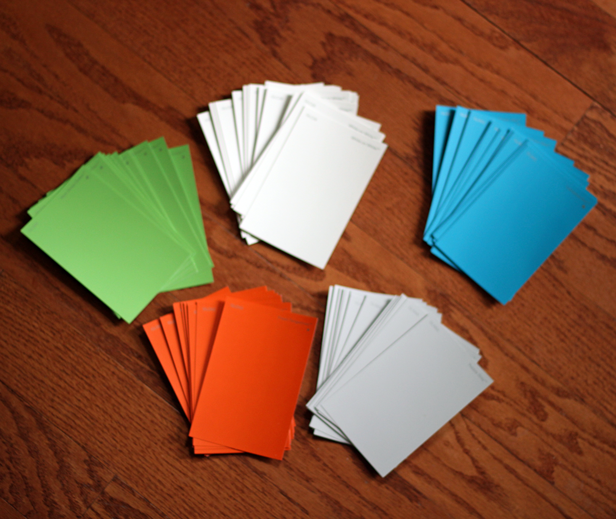 The paint chips were Gliden brand and measured 3.25″ x 5″.  I was able to fit six on my Silhouette cutting mat at a time, so I arranged them in the color pattern that I wanted the final banner to be.

Starting on the left, I aligned three across the top edge and the other three across the bottom edge….this would make it easier when aligning everything in my Studio program and preparing to cut them out. 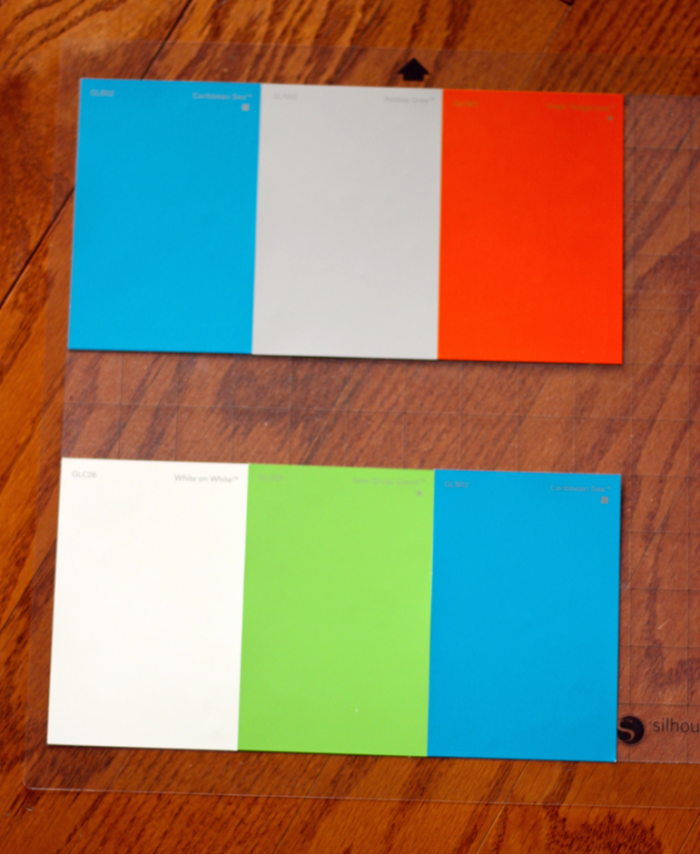 Please forgive me for this exceptionally blurry photo….I accidentally deleted the good one!

Next, I opened up my Silhouette Studio software.  Since I knew the dimensions of each paint chip, I used my rectangle tool from the left menubar to make my virtual paint chips that I would be cutting the letters out of….these rectangles won’t be cut though.  I’m just using them as guides for sizing the letters.

I paid attention to the dimensions on the height and width of my rectangle to make sure it was sized correctly. 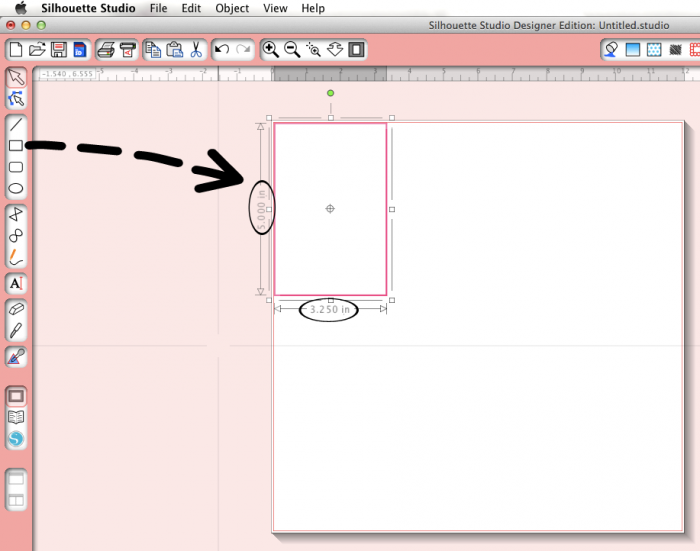 Create a virtual paint chip that will serve as a guide for sizing the letters. 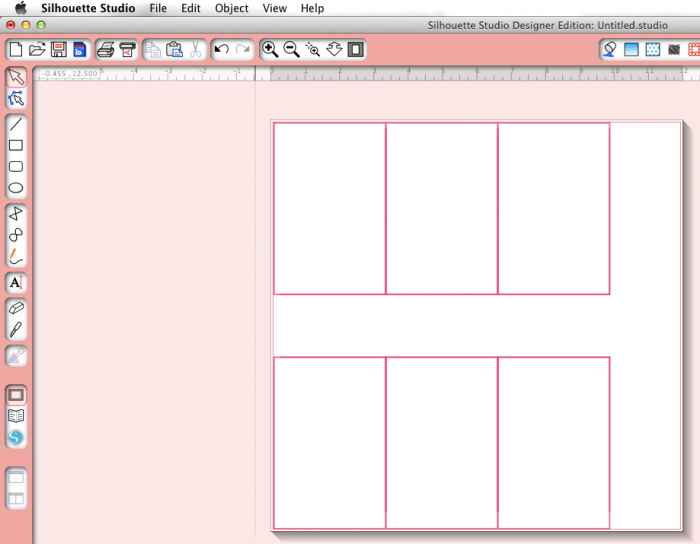 Duplicate the virtual paint chip so you now have six, and place them on the mat in the same positions as your real paint chips are located on your real mat.

Now it was time to add the letters.  I chose to go with the font called Adam Gorry Lights.  I like how it’s a thick, chubby font that will be easy to cut and is very banner-esque.  I also love how it has the little dots cut out in the middle….very festive!

I seem to like this font a lot too….I also used it for The Cub’s first birthday canvas art project.  Hey, what can I say….if I like something, I stick with it.  That’s why I still order a kid’s meal from Taco Bell.

I first used my text tool from the left menubar and placed an ‘H’ over the first rectangle and sized it to fit within the boundaries.  Then I duplicated it five times and moved each one over a different rectangle, then changed the letters as required (this was just so each letter would be the same size without me having to manually adjust each one).  Some of the letters had to be resized a bit to fit within the borders (particularly the ‘Y’ and ‘M’), so whatever font you choose, just take note that you will probably need to do some resizing here. 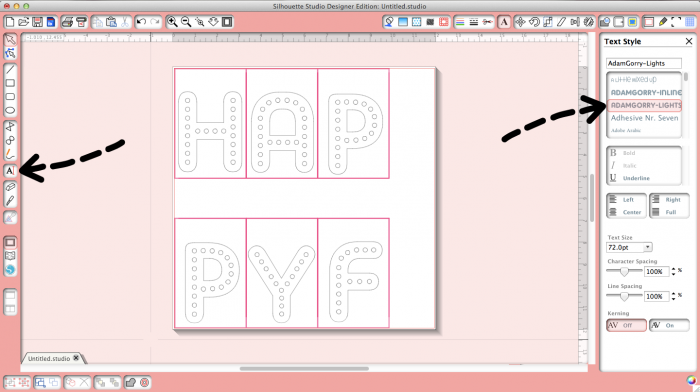 Choose a font and place one letter on each virtual paint chip.

Now it was time to cut!  Since I already had the paint chips, I didn’t need to cut the rectangles out (once again, those were just guides).

To make sure only the letters got cut, I selected a rectangle, then went up to my Cut Style option along the top menubar, and clicked on ‘No Cut’ under my options.  I had to do this for all six rectangles.  Make sure you leave your letters to be cut (they should stay highlighted in bright red). 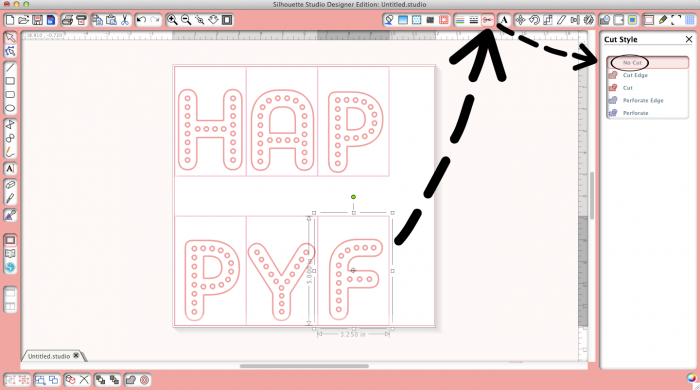 Don’t forget to change the cut settings since you only want to cut the letters!

Silhouette Studio does not have a default cutting setting for Paint Chips (say whaaaaa?).  So, under my Silhouette Cut Settings menu, I selected the ‘Textured Cardstock’ setting and left all the defaults:

I loaded my mat and did a test cut just to make sure everything was peachy keen.  It was, so I hit ‘Cut’!

I used the ‘Textured Cardstock’ setting and left all the defaults. It worked perfectly!

And we had success!  Each letter cut perfectly on their respective paint chips (The ‘Y’ cut a little close to the right edge, so I made sure to adjust its placement in Studio before cutting my next round for Banner #2). 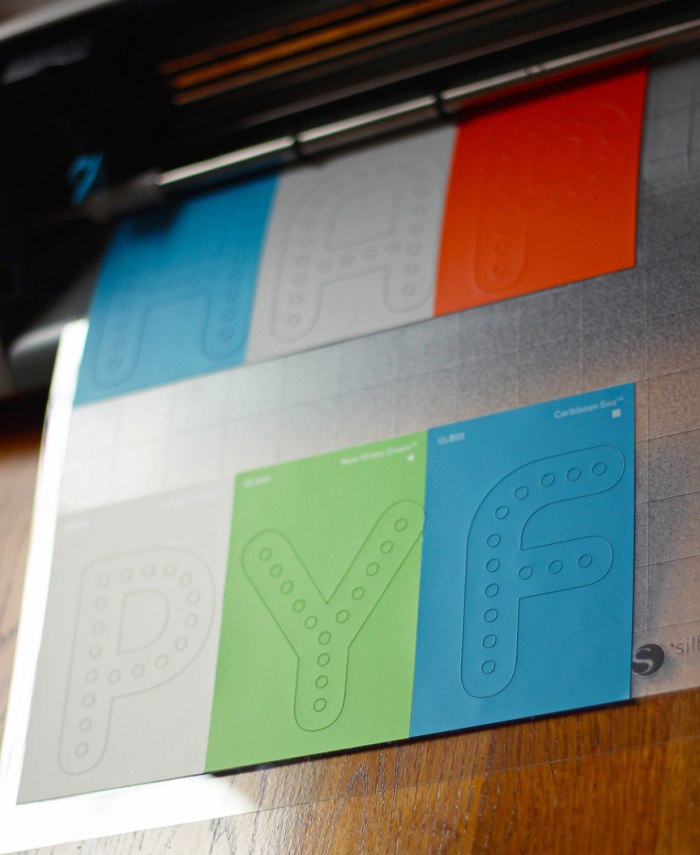 How cute are these??

Yes, these do make me happy!

Another bonus about using this font is that you get instant confetti!  If I ever need confetti in my future, I’ll be sure to save these little dots every time I use this font….and it’s so fun to scrape off the mat! 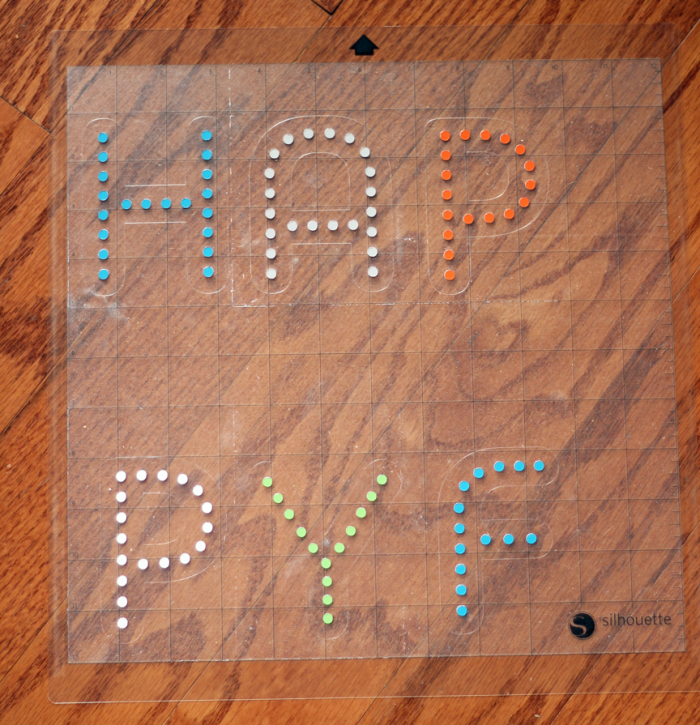 Another bonus of this font…instant confetti!

Stringing The Letters Into A Banner

Since I was making two banners, I just reloaded my mat with the same order of paint chips and cut the same thing out again.  Then I just repeated all the steps, simply changing out the letters and adjusting the color of the paint chips on my mat to keep the same order going.

Once all the letters for both banners were cut, I used some baker’s twine to string them into a banner (another bonus of having the little dots already in the font!)….one banner had blue string while the other got the green. 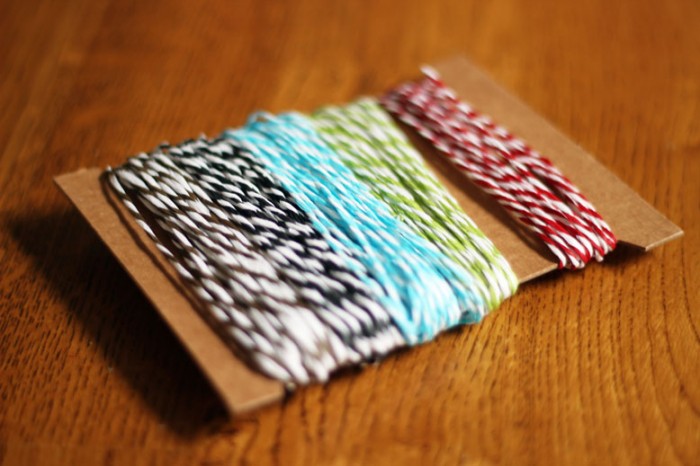 It took one nap time from start to finish to complete this endeavor.  Gotta love quick projects, especially ones that are virtually free thanks to the paint chips….props to you, Gliden and Home Depot!

I strung one of the banners across our mantle just to see the finished product in all its glory.  The Cub was interested in it for a few minutes, but after successive failed attempts at yanking it down, he resided to playing with his toys again.  Silly boy…. 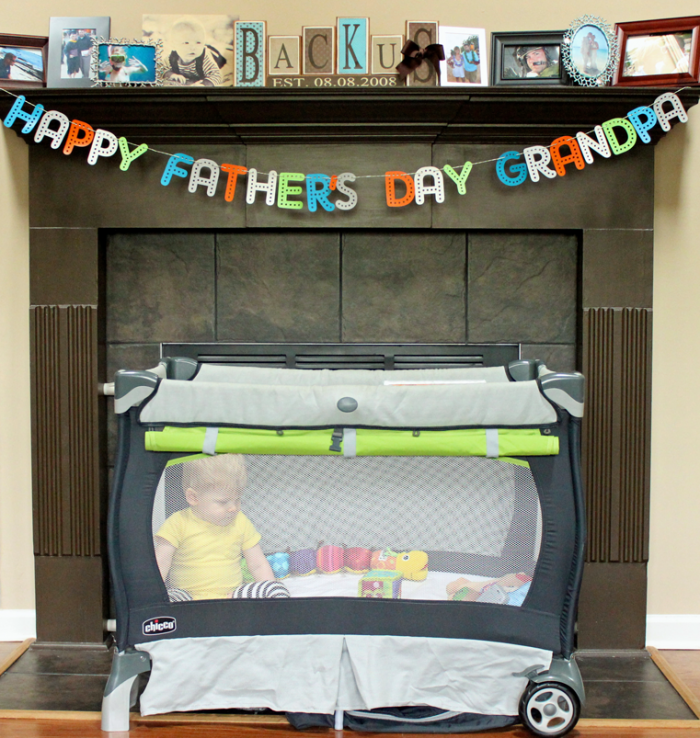 I think it makes a mighty fine holiday greeting.

I had some extra 5″x7″ red envelopes left over from The Cub’s first birthday invites, so I grabbed a couple and addressed them to the Grandfathers.  Then I slowly folded each letter back-to-front and made a little stack that fit perfectly in the envelope. 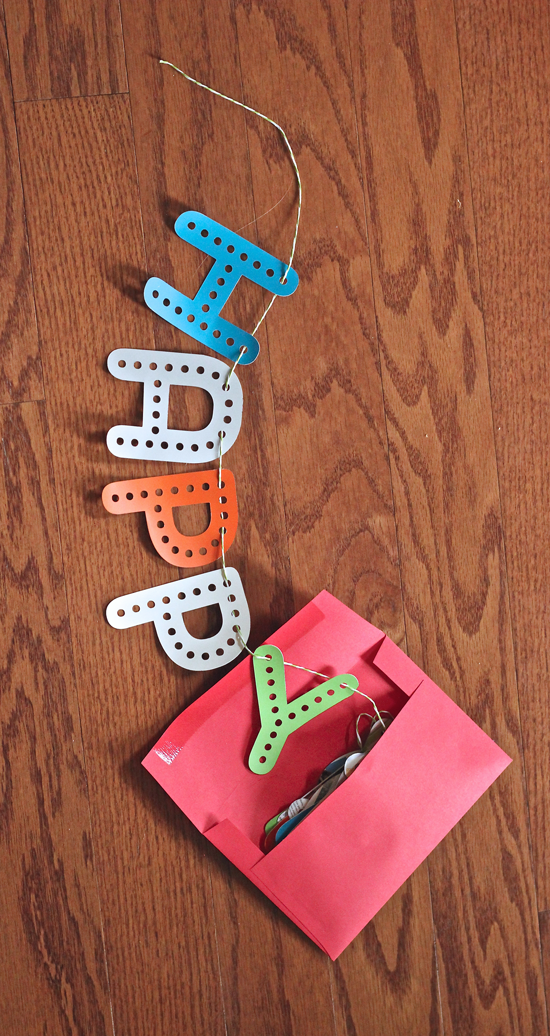 I was a little worried that one Forever stamp wouldn’t be enough postage since the envelope was a little thicker than normal (just poofy from the string)….I wasn’t sure if it would be returned to us with a USPS nastygram saying “Give us more money for postage, you idiot!” (or something to that effect), but to my pleasure, they were both mailed just fine.

No, they were NOT both mailed just fine.  The card going to Grampy up in Maine was delivered without any issues, but the card going to Grandpa in Kentucky got returned to us for insufficient postage….eight days later!  EIGHT days!!  All for a measly 21 cents.  So Grandpa didn’t get his card in time for Father’s Day. :/ USPS, I just don’t understand you!

Moral of this story: You MAY need extra postage. 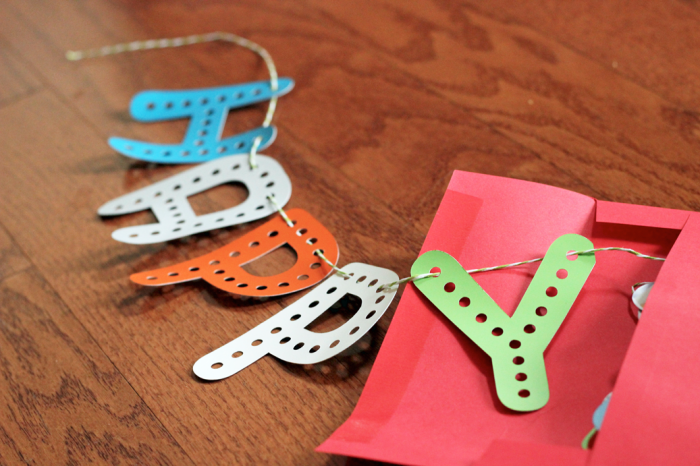 This banner-turned-greeting-card makes me happy and I’m sure the Grandfathers will smile when they open it up.  Mission accomplished!  Maybe they’ll even hang it up in their offices at work, or save it and hang it up next year.  Who knows.  All I know is they sure love their grandson. 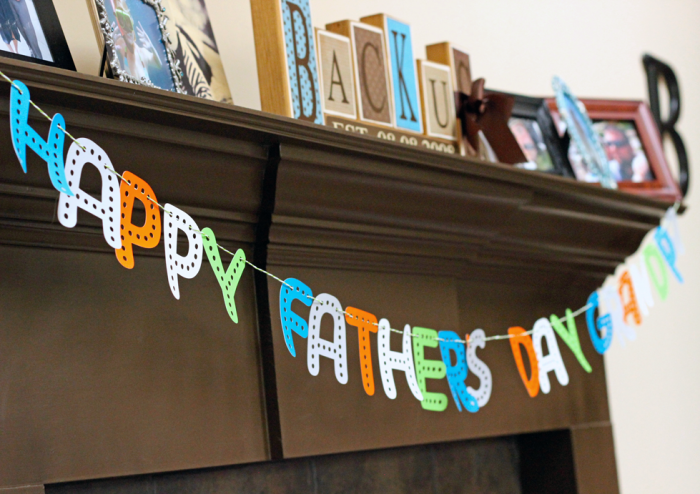 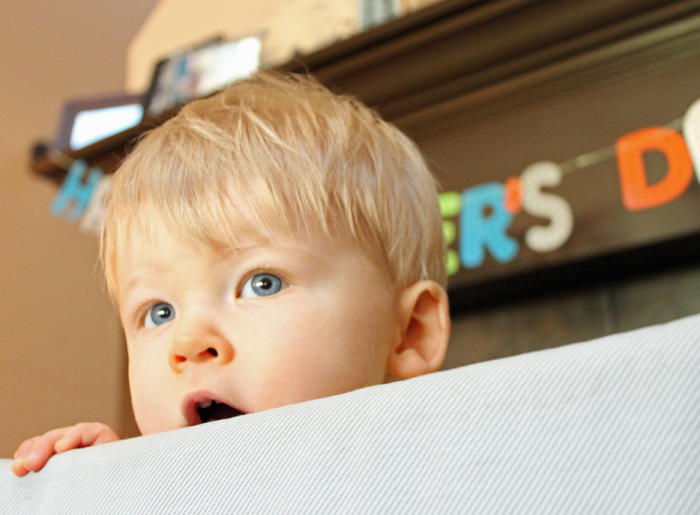 This project was super easy, so I’m sure I’ll be making banners like this again in the future.  I LOVE decorating the house for holiday/seasons, so our mantle will be bare no more! 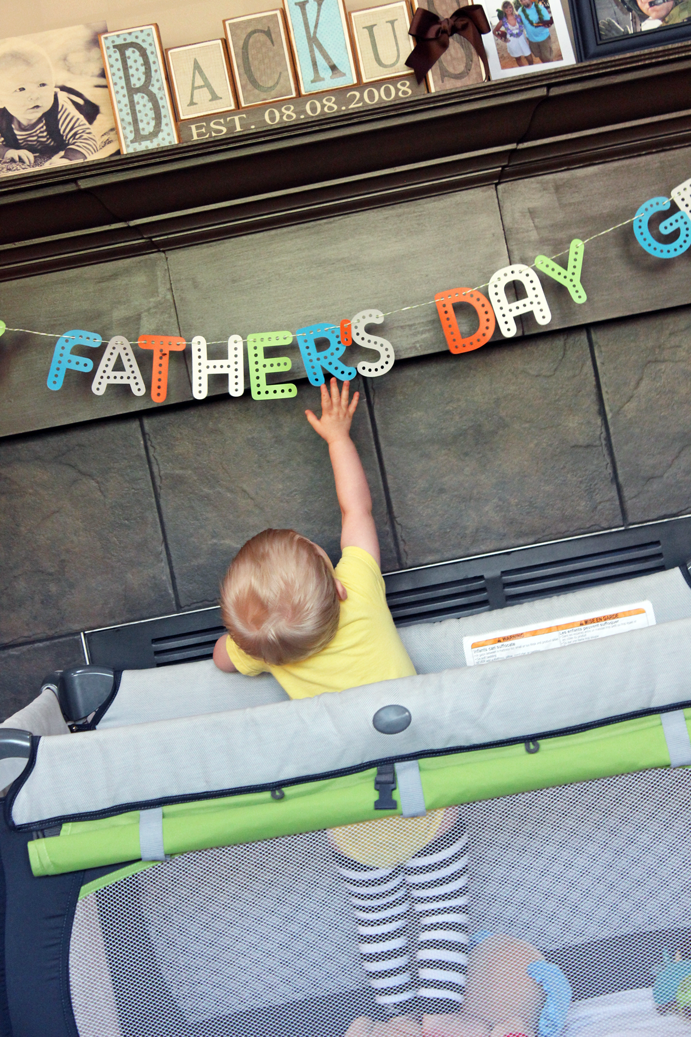 I admire The Cub’s ingenuity in his attempt to grab and destroy the banner….his poor puppy dog became a step stool.

Make sure you check out my Project Gallery for all of my other crafty creations, tips, and freebies, like these! 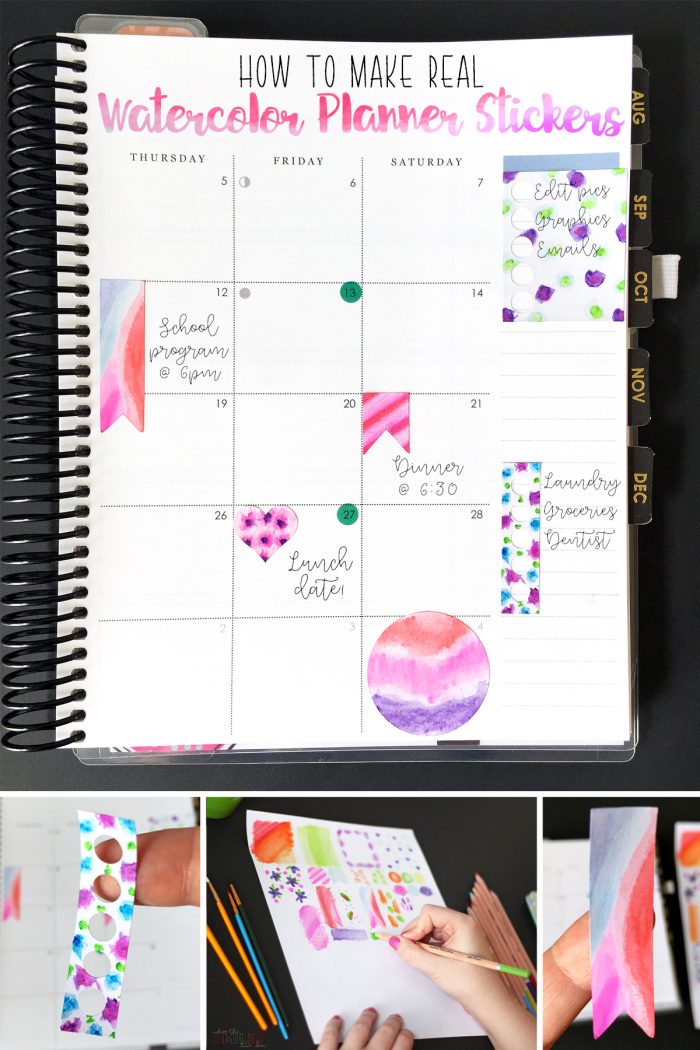 I love this idea of using a banner as a greeting card. I'm glad you used up those paint chips instead of throwing them away.

[…] really like this font….I guess it’s the dots in the middle.  They worked great for my paint chip Father’s Day banner as well!  I used my rulers in Studio to eye-ball the size, then cut it out of some scrap orange […]