What do you get when you combine a napping toddler with a momma who’s bored, but not quite bored enough to do housework?? If I’m that momma, it’s gonna be something silly! That’s just what happened today.

My son was taking an extra long afternoon nap, and I had zero motivation to mop these floors (we all know they’re just going to get covered again in peas and puffs and apple juice during dinner, so why bother, right?). So, I busted out my iPad and did a little doodle art project with some photos of his many faces!

Back when Rowan was just a month or so old, The Hubs snapped a bunch of photos of him (and his many, many faces) randomly one day after a diaper change.

The cool thing is that I didn’t even find this out until I stuck my camera’s SD card in my laptop weeks later to upload a batch of different photos…..talk about a great surprise! I’ll take as many photos of my little man as I can get.

The Hubs did a great job with them too….they weren’t blurry! (If you have a baby, you know how exciting this fact is!)

So, one day I opened several of these face photos up in Photoshop Elements and converted them to black and white, then compiled them into a little collage using an app on my Mac called CollageItFree.

They make me laugh, especially when they’re grouped together like this. 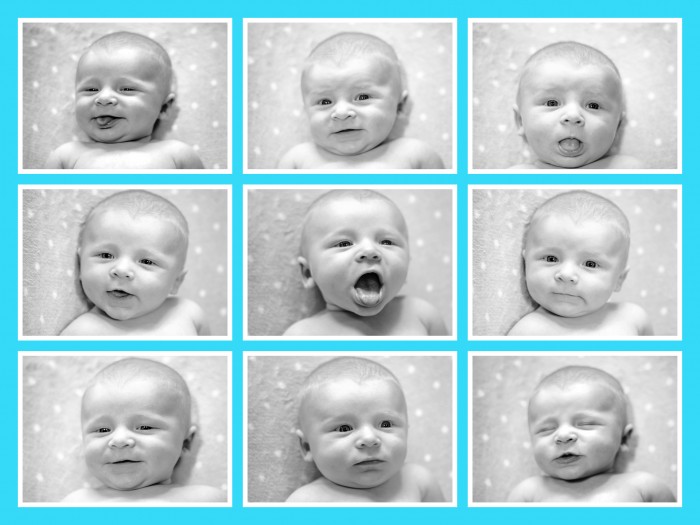 I don’t know why, but for some reason today, I all of a sudden got the idea to get my doodle on and make these face photos of Rowan a little more….silly (before I didn’t think that was possible).

I am by no means an artist (especially with anything dealing with hand-drawn elements….I’m sure Rowan himself could draw better than me, even with him not being able to hold a pencil yet), but I grabbed my iPad and stylus and started playing around anyway.

What did I have to lose? If it was total garbage, it would just not get saved. No big deal.

I used an iPad app called ArtStudio and simply opened up the original face photo file, created a new blank layer, and used the pen tool. Then I just doodled away!

The blank layer was added just so if I needed to erase a doodle (which I did OFTEN), only the doodle would be removed and not the actual collage….it pays to plan ahead. 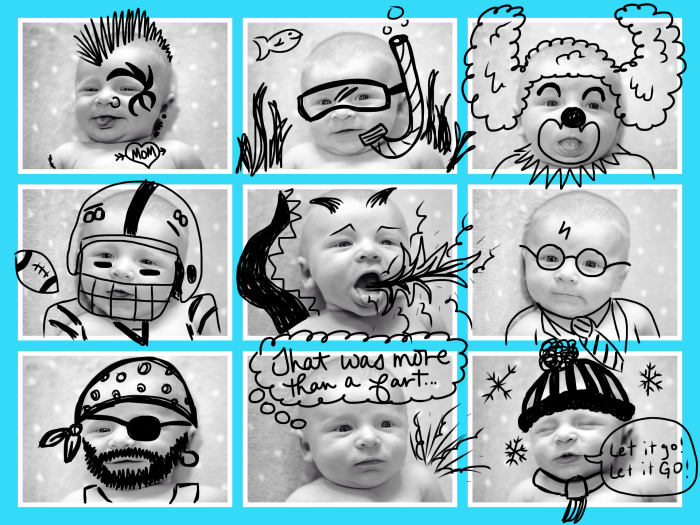 I had a hard time thinking of different personas for each little face, and I had to adjust some of my “designs” (if you can call them that) to accommodate my lack of artistic ability (i.e. the pirate in the bottom left corner was originally planned to have a parrot, but since I can’t draw anything remotely resembling a bird, the pirate was left without a first mate. Argh!).

Then after my masterpiece was complete, I made the animated GIF you see below in Photoshop Elements….just because I love a good before & after.

This was a good time waster (and chore sidetracker) and it makes me chuckle every time I look at it.

I’m not sure which persona is my favorite…probably either the punk rock mohawk baby (just because Rowan started growing a natural mohawk at four months old), or maybe the Harry Potter baby.

Ahhh heck, I love them all. The Hubs said I should frame a copy and hang it in his room, and I think I will….instant happiness.

Make sure you check out my Project Gallery for all of my other crafty creations, tutorials, and freebies!