So my little dude is nearly 14-months-old now, and I STILL hadn’t created anything with his newborn stats on it.  I just hadn’t been able to decide what I wanted to make.

I thought about designing a graphic print in Photoshop and framing it to hang in his room, but since I have my amazing Silhouette Cameo now, a whole new world of possibilities have opened up.

I knew I wanted it to be colorful and fun (and include his cute little newborn footprint as well as his birth stats), and I think this newborn stats canvas I created turned out beautifully! 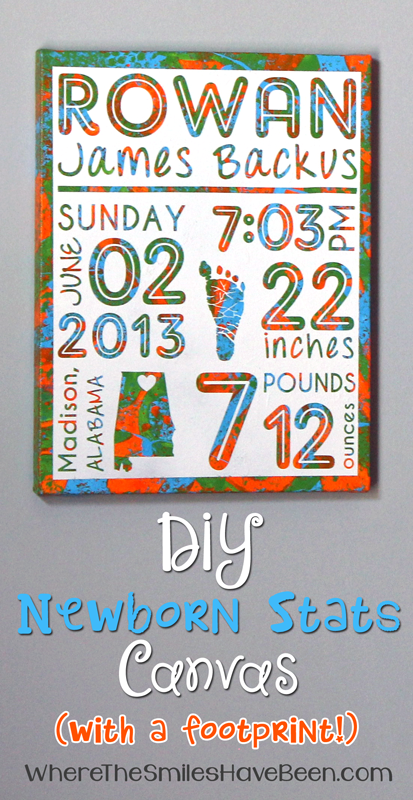 When I first made the design for Rowan’s newborn stats, I had planned on cutting it out of different colors of vinyl and then applying them onto a white canvas.  However, I was perusing a great crafty blog called The Thinking Closet and was inspired by Lauren’s DIY Subway Art Canvas….it was so colorful, AND it would be easier (and more fun!) than doing all that vinyl cutting and layering that I had originally planned.  So, now that I had my objective settled, it was time to create!

Supplies I Used To Make This Newborn Stats Canvas

Get your paint on!

I was lucky and went to Michaels while they were having a three-for-the-price-of-one sale on canvases, so I grabbed up three different sizes and used the 11″ x 14″ one for this project.  It only cost me around $3!  Ahhh, sales make me happy.

I also had a bunch of craft paint left over from painting the little party dinos for Rowan’s first birthday party, so that’s what I used here.  They were the Martha Stewart brand acrylic craft paints in high gloss.  If I ever do a project with vinyl on canvas again, I’ll probably use a satin paint….the vinyl did NOT want to stick to the high gloss paint, but more on that later.  I used green, orange, and blue to coordinate with the color scheme of Rowan’s room. 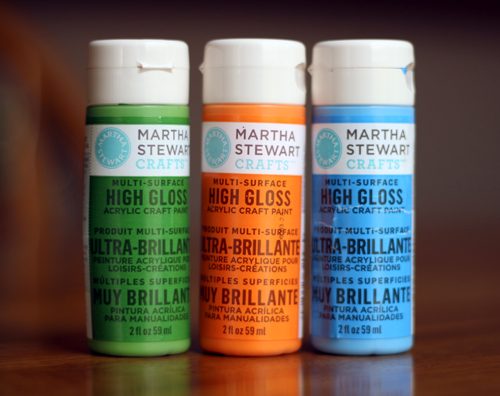 I am no Picasso or Monet, however, I didn’t need to be with this!  The beauty of this project is that most of the design is going to be covered in the white spray paint and the only color (aside from the edges) that will show through is in the letters’/numbers’ negative space.  That meant my terrible painting skills wouldn’t be obvious, so I could get as crazy as I wanted.

I first created an abstract design with the blue paint, just painting random lines and shapes.  Next, I added a layer of green abstractness, then filled the rest in with the orange.  I also made sure the edges were covered in a haphazard pattern as well.

To give the painting a little more interest and funkiness, I then went over the surface with some bubble wrap…..I just dabbed a little piece in my three paint colors then blobbed it all over.

I still wanted to jazz it up a bit more, so I then took the canvas to our backyard and got my Jackson Pollock on!  I added a bit of water to my paint to thin it out some and flung paint splatters here, there, and everywhere….literally.  Don’t wear fancy clothes if you choose to do this step.  It’s fun, but can be rather messy (but I guess that’s what makes it so fun, huh?).

I created the design using Silhouette Studio.  I wanted to include not only all of Rowan’s newborn stats (birthdate, height/weight, and time), but also his birth city and state.  To make it even more special and personalized, I also included his newborn footprint that was taken at the hospital when he was just an hour or so old.  I’ve seen other designs out there that include a footprint, but they are all just generic clip art…I wanted the REAL THING.  Yes, Rowan’s actual footprint, cut in vinyl.  It’s even to scale, all 3.25″ of his tiny little newborn tootsie.  So small and sweet…..*sigh*

You can read all about how I was able to create his actual footprint here.  I think it’s just the cutest little thing and is definitely one of my most favorite creations.  It also adds such a great, personalized element to this project. 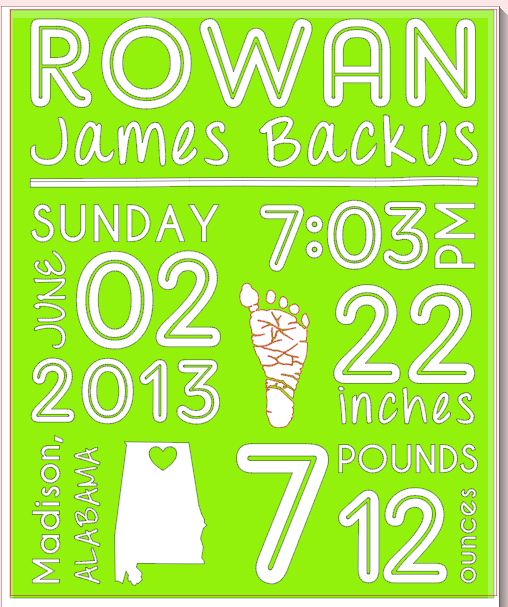 Once my design was finalized, it was time to cut it out!  I used my Silhouette Cameo and some white Oracal 651 vinyl….and it worked perfectly!  The settings that I used were the default vinyl settings, except I bumped the speed down to 4 since the footprint had some rather intricate cut lines in it.  My settings were: 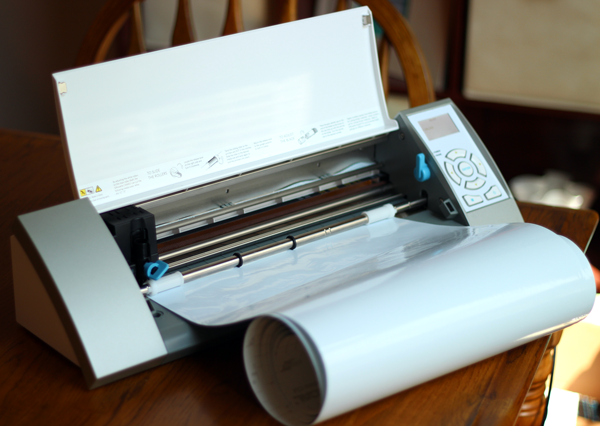 Once my design was cut, I weeded it with the help of my hook tool, trimmed up the edges, then applied some transfer paper to the top using my scraper tool.  Next, I centered it on my canvas and used a few pieces of painter’s tape on the edges to secure it in place.  Then I used the hinge method for application….I’m not sure if that’s the official name of this method (or even if it has an actual name) but that’s what I call it.

All I do is take a long piece of painter’s tape and apply it all the way across the center of my vinyl piece, remove all the helper pieces of painter’s tape from the edges, then work on applying one half of the vinyl at a time.  Since the painter’s tape is now acting as a hinge point, I just grab one half, pull up the transfer paper (which now has the vinyl attached to it), cut away the backing with my scissors, then slowly apply that half of vinyl working from the hinge outward.  Once that half is applied, I just remove the hinge tape, pull off the other half of backing, and apply the remaining vinyl.  Easy peasy!  It’s the easiest way I’ve found of keeping my design in place during application. 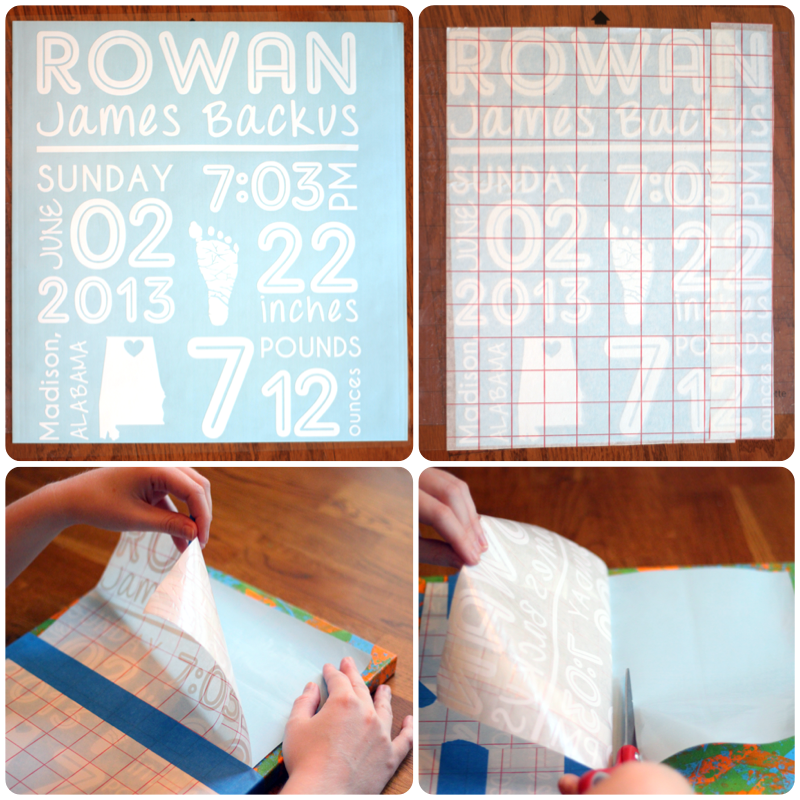 It took quite a bit of scraping to get the vinyl to release from the transfer paper and stick to the canvas.  By “quite a bit” I mean I had to work one. letter. at. a. time….scraping feverishly then cutting away its backing before moving onto the next.  I actually first cut out the design in Silhouette brand premium matte black vinyl and got up to this point with it….but it refused to cooperate!  It was not budging.  No way, no how.

I think this was mostly due to the fact that my paint was high gloss, which tends to have this happen when trying to apply vinyl to it.  The paint was what I had on hand, so oh well.  So, once my level of frustration reached near boiling point, I cut my losses and started over with the vinyl, this time with Oracal 651.  It was still resistant to the vinyl, but eventually it cooperated.

Once the vinyl was applied, I thought it looked pretty darn cool as is!  But, like I just talked about, it wasn’t a happy marriage between the vinyl and canvas, and I’m sure the vinyl would eventually peel away with even the slightest touch or breeze.  Plus, there was more fun with spray paint left to be had! 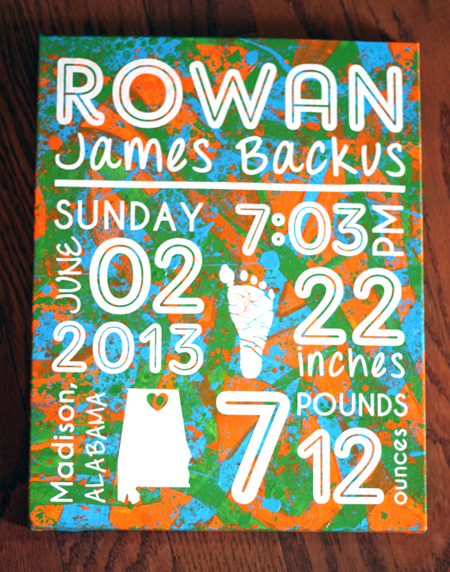 Get your spray paint on!

Next, I applied some painter’s tape around the edges so some color would remain, aside from the information….ya know, just to make it a little more interesting.  Then I propped up the canvas in our backyard and started the spray painting fun!

I first applied some gray primer (a great tip from Lauren!).  This was to help keep the colored paint from showing through the white and cut down on the coats of white paint that would be needed (at least that’s my guess).  I only needed a couple coats of gray primer that were about 45 minutes apart.  Then I applied a few coats of the white spray paint, only about 10 minutes apart from each other. 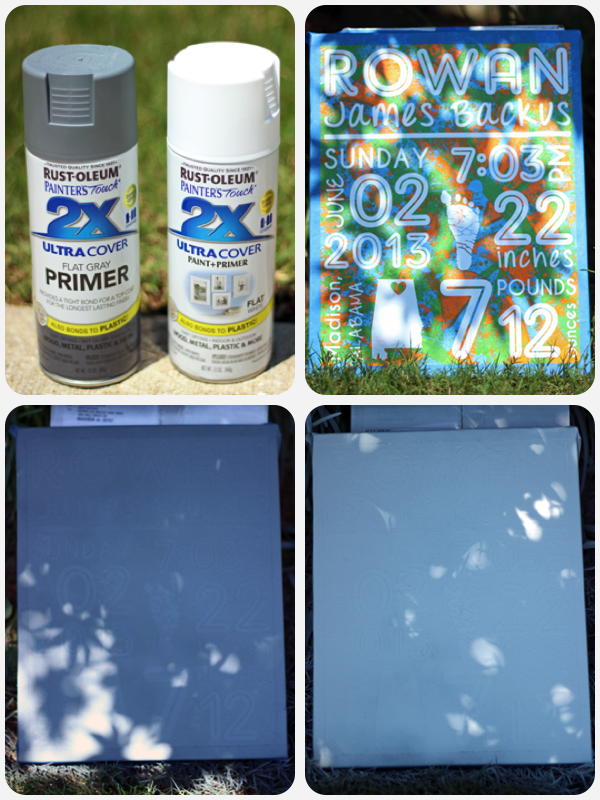 I forgot to put a garbage bag down first…..sorry grass!

Once the paint was completely dry, I pulled away the painter’s tape edging, then started removing the vinyl.  It was actually much easier (and faster) than I thought it would be.  I used a razor blade to raise up a piece of the vinyl then grabbed it with my fingers and slowly pulled it off.  The best part was….no colored paint pulled up with any vinyl, and no primer/spray paint bled underneath!  SUCCESS!

I am beyond thrilled with how this project turned out!  Ahhh, I just can’t tell you.  It looks better than I ever thought it would, and it was so easy (aside from getting the pesky vinyl to stick).  But I LOVE the final product!  It has all of Rowan’s important newborn info (and his cute little foot….squee!), but it’s still colorful and fun…..and definitely unique! 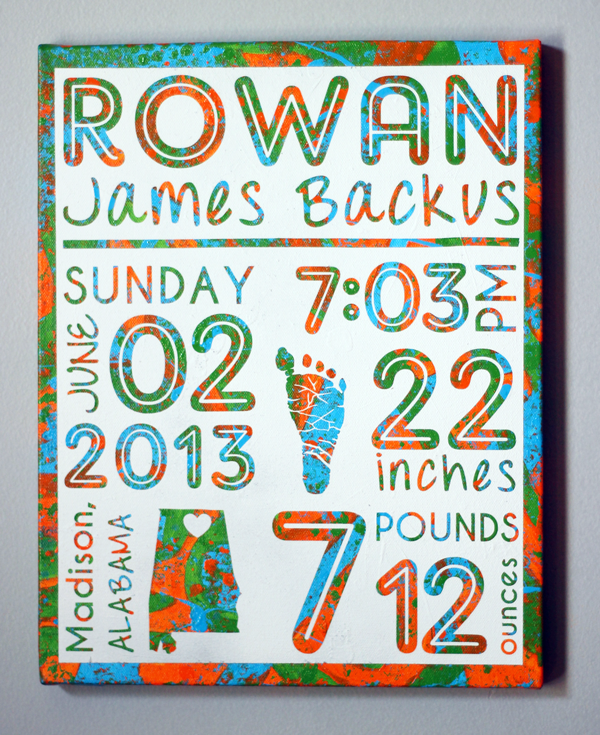 I love how well this piece coordinates in his room, and it goes great hanging next to his first birthday art canvas. 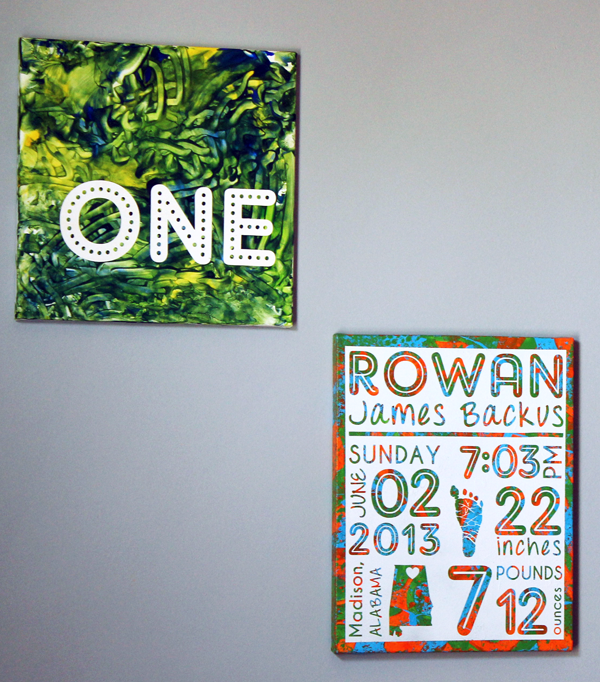 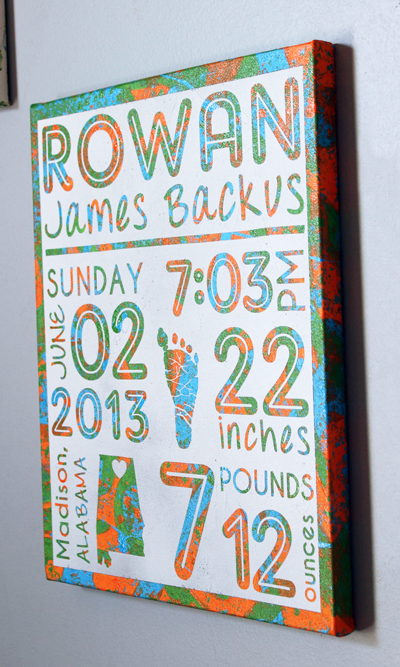 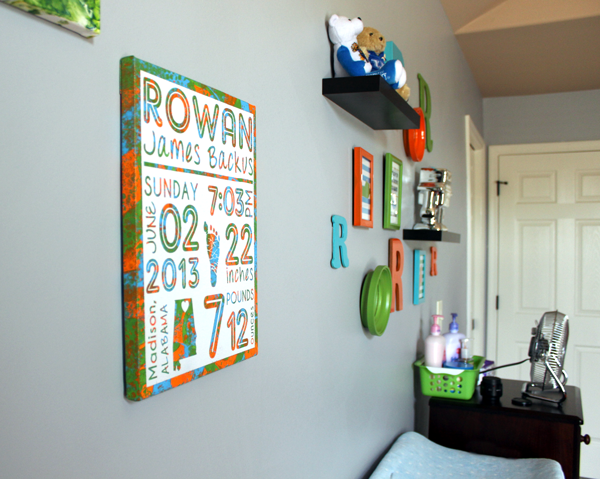 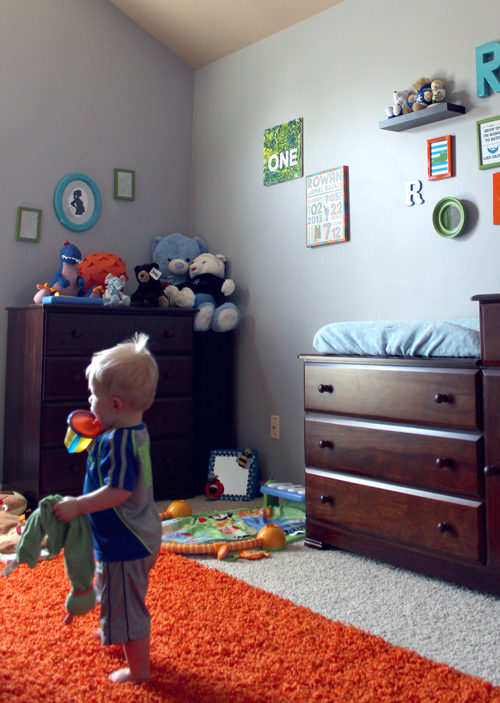 What font did you use for the Rowan and numbers?

Reader Showcase: A Look Back at Summer 2014 — the thinking closet

[…] projects to date has been the DIY Subway Art Canvas I made for my friend Gianna.  Well, Christine’s variation on that concept turned out so marvelously.  She incorporated “Newborn Stats” as well […]

[…] design in the chest area of the shirt, and, using the hinge method (which you can read more about here and here), applied the […]

[…] I did another art project that now also hanging in The Cub’s nursery: his newborn stats canvas. […]