You know how sometimes, a project just comes together perfectly right from the get-go?  Inspiration strikes you immediately and you have a crystal clear vision of not only what you want to do, but also the supplies you’ll need as well as the actual process.

Then once you actually dive in, the crafting stars align and the gods shine down upon you and everything falls into place and works out PERFECTLY, leaving you beaming with pride while saying “OMG, *I* am amazing and so is this masterpiece that I just created?!?” and you want to show it off to anyone and everyone….

Yeah….this was NOT one of those projects.  Well, sort of not.  My inspiration and supplies came to me quickly, but I over-thought the process (over-thinking = typical me) so the execution didn’t work out like I had envisioned.  BUT, that being said, I still think my final scarf is pretty darn cool.  Not completely what I had intended, but I’m still digging it and will wear it with pride!

Here I’ll share with you not only what I used and did, but also some tips for improving the project in case you’d like to try this idea out yourself….and it’s also SCARF WEEK!!  Yep….keep reading to find 12 other awesome dyed, painted, and stamped scarf ideas!

Maybe it’s because I have one Bachelor’s and two (yes, two) Master’s degrees in Psychology, but I’ve always been fond of Rorschach ink blots.  The high contrast, the glorious symmetry, and the open-for-interpration meanings are always things I’ve really digged about them, and I thought it would be fun to try and create my own for this project.

Now you’re probably reading this post’s title and thinking to yourself “Ummmm, Christine….isn’t *abstract ink blot* a little redundant??”  I know, I know.  Ink blots are by nature abstract.  The final results of my scarf experiment ended up being really abstract….but more on this in a bit.

Just for fun, take a look at the following ink blot….what do you see?: 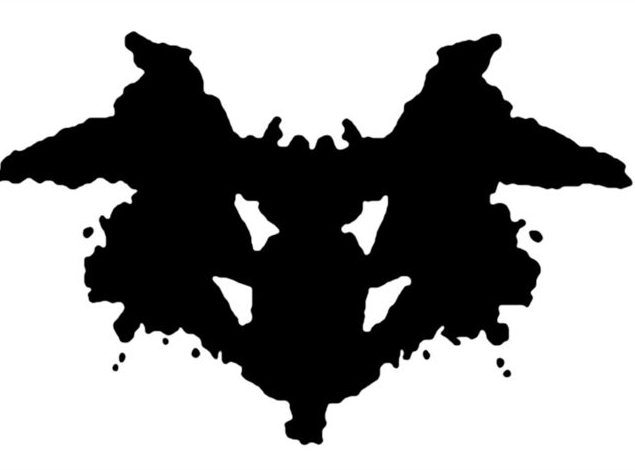 I see a couple flying pigs standing on the Liberty Bell (hey, I am back home near Cincinnati over Fourth of July weekend), while my husband sees an angry elephant.  Definitely open to interpretation, huh.  Here’s our actual texting conversation about this: 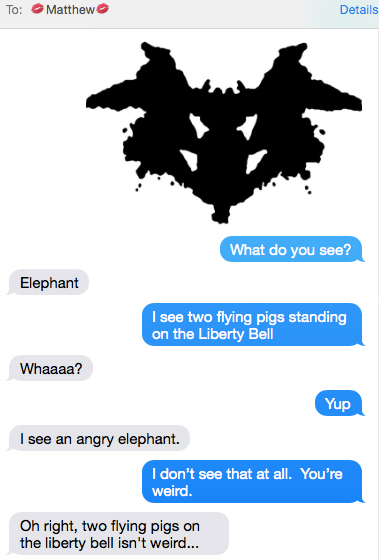 I bought a basic light-weight scarf that’s 100% cotton (you need to use natural fabrics with Inkodye).  I wanted something that would be thin and light-weight since I like to wear scarves in all seasons. 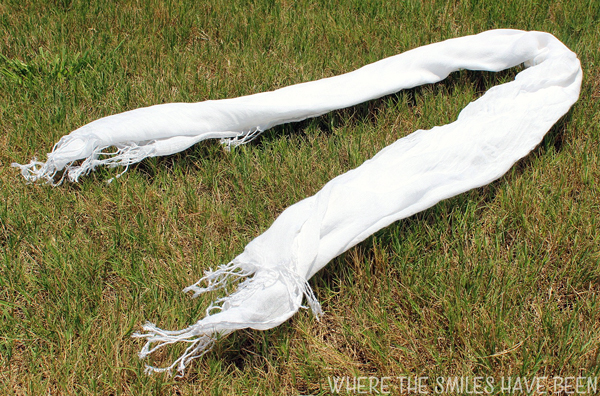 This is where my over-thinking started.  I wanted the scarf to have mirrored images both vertically and horizontally, so I first laid the scarf out flat…. 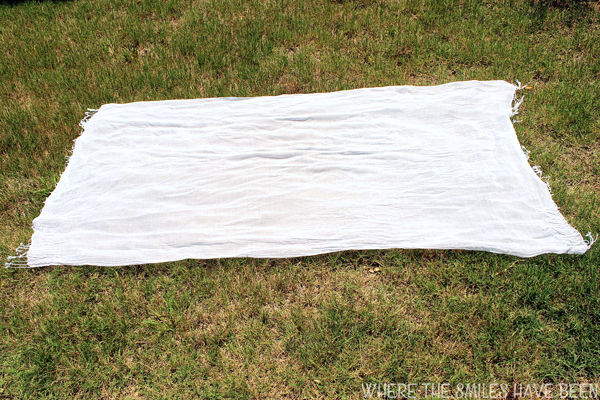 ….then folded it in half one way…. 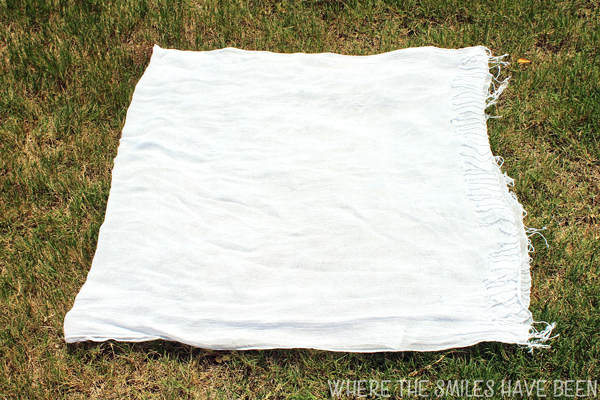 ….then in half again the other way. 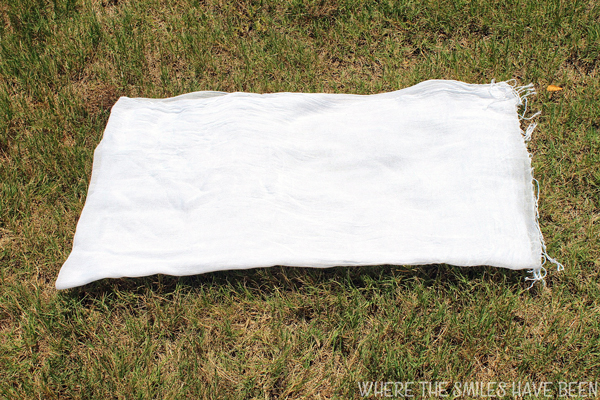 I didn’t want to use regular fabric paint because this is a very thin scarf, so I went with some cool dye that I’ve used before with great success: black Lumi Inkodye!  I used this previously when I made a Game of Thrones Night’s Watch t-shirt for my son, and it’s pretty darn cool.  You can check out that tutorial for all the details on just what it is and how it works.

A great thing about this dye is that it changes the actual color of the fabric instead of just getting applied to the surface like regular fabric paint.  This means the scarf will still maintain its lightness and breathability….definitely a necessity here in Alabama.

It comes as a pretty thick liquid, so I thinned it out with quite a bit of water (it’s also a nice way to stretch a bottle since the final color result is still the same, even being diluted). 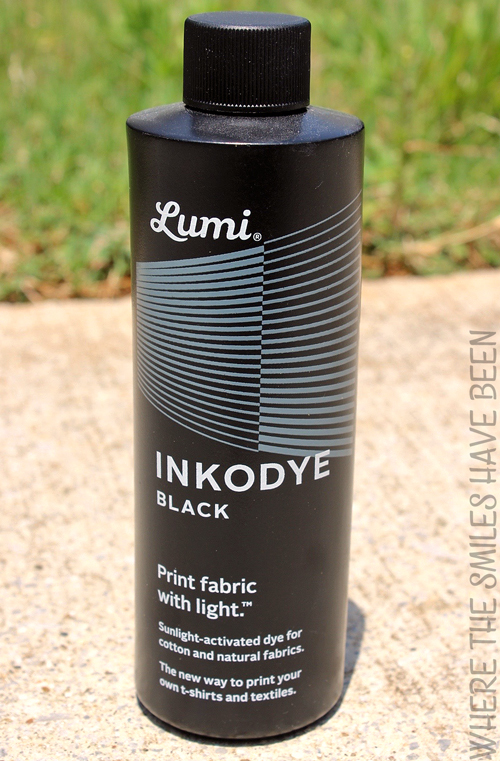 Creating the (Sort of) Ink Blots

So here’s my set-up for the Inkodye application…..oh so professional, no?  My reasoning behind using chip clips to attach the folded scarf to the backs of two spare chairs was this:

I would pour the Inkodye directly out of the bottle and onto the scarf, *assuming* that it would quickly be absorbed into the thin cotton and all the layers would have the same ink pattern.  Therefore, when the scarf is unfolded, it will have the perfectly mirrored ink blots…. 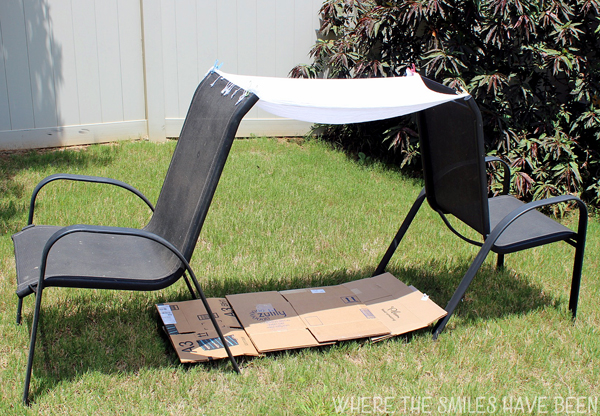 ….but, that’s what I get for assuming.  Even with the Inkodye being very diluted and thin, it did not absorb quickly into the cotton.  Instead, it pooled on top and rolled down and along wherever gravity took it, like raindrops on a windshield.

This resulted in thin streaks instead of thick blots….boo.  It also meant that all the folded layers didn’t receive the same amount of dye, so half of the scarf is a little more dyed than the other….double boo. 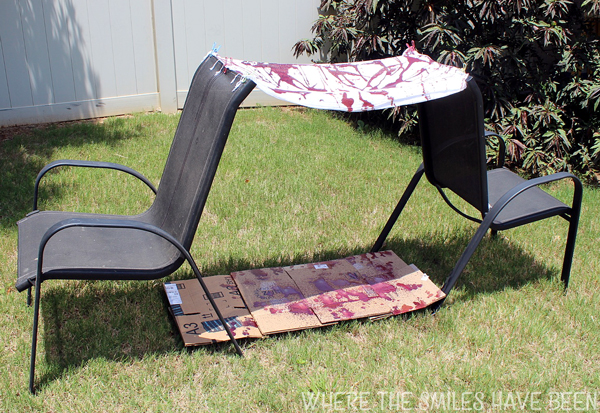 The Inkodye starts as a light tan color, then gradually changes to a red/burgundy, until finally ending up as true black once it is fully activated by the sun.  The pseudo-bloody murder scene image you see below was snapped mid-way through activation (so don’t worry, no human or animal sacrifices were made during the making of this scarf). 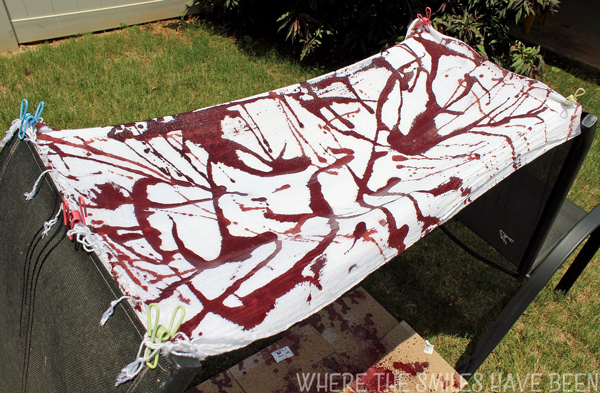 Once all the Inkodye had been poured on, I unfolded the scarf (and started crying internally that my ink blots weren’t looking very ink blotty), then let it sit in the sunlight for about twenty minutes until the dye turned black.

Then I brought the scarf inside and ran it through a couple hot wash cycles with some Inkowash. 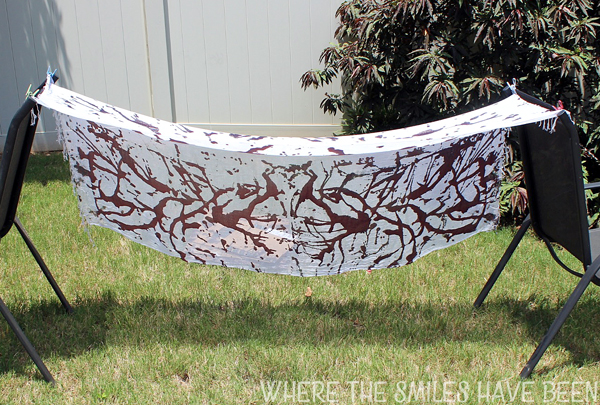 The Final Abstract Black and White Ink Blot Scarf Dyed with the Sun!

And here it is!  While it’s not the ink blot masterpiece I was originally going for, I still really like it.  It’s definitely abstract and unique, and most importantly, cool, hip, and different, which is ultimately what I was going for….so all’s well that ends well!

It’s got a lot of different things going on:

Either way, it’s much better than the plain white original, and I love that it’s 100% unique. 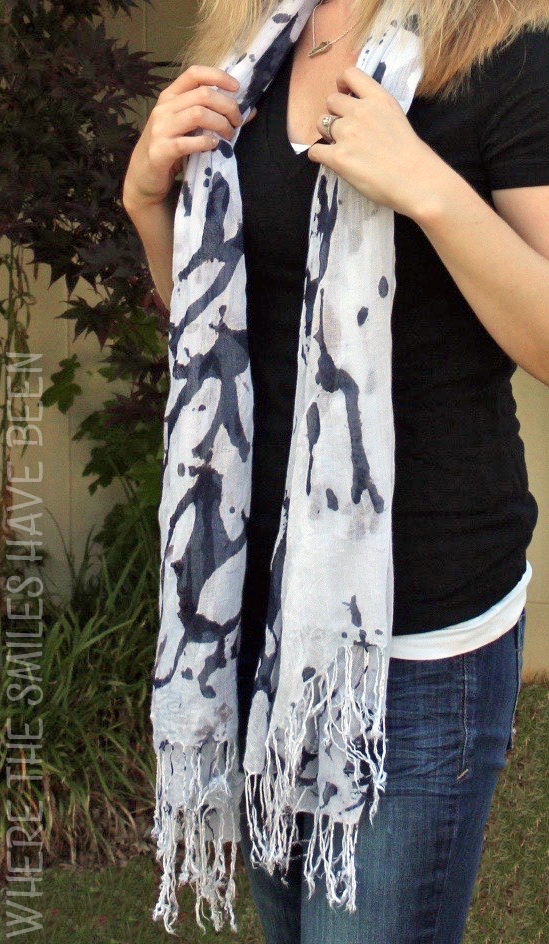 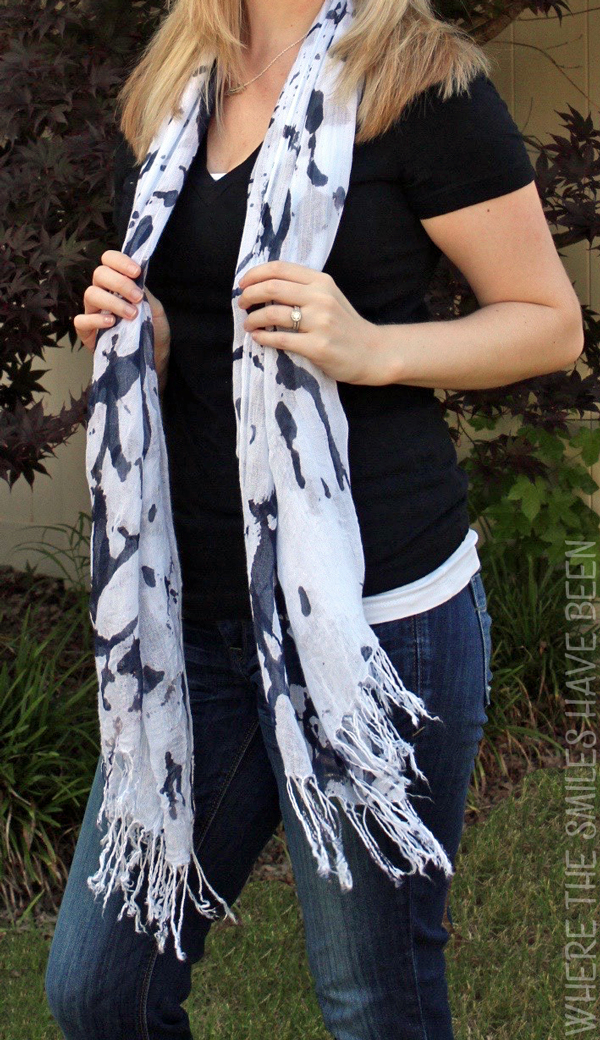 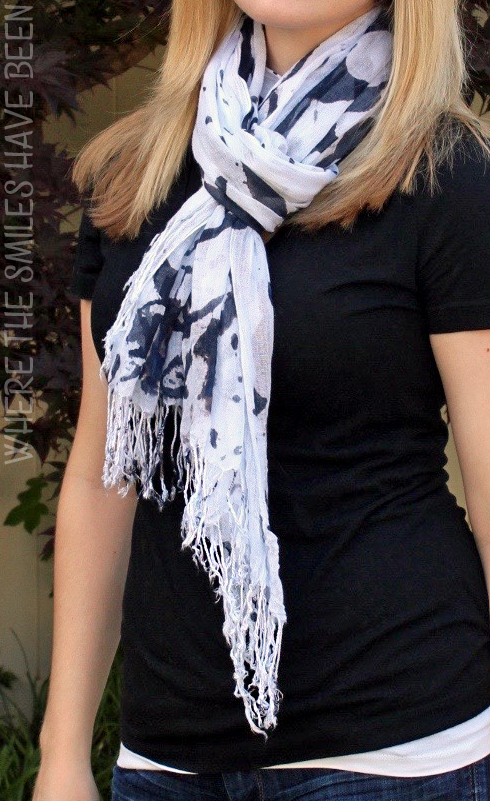 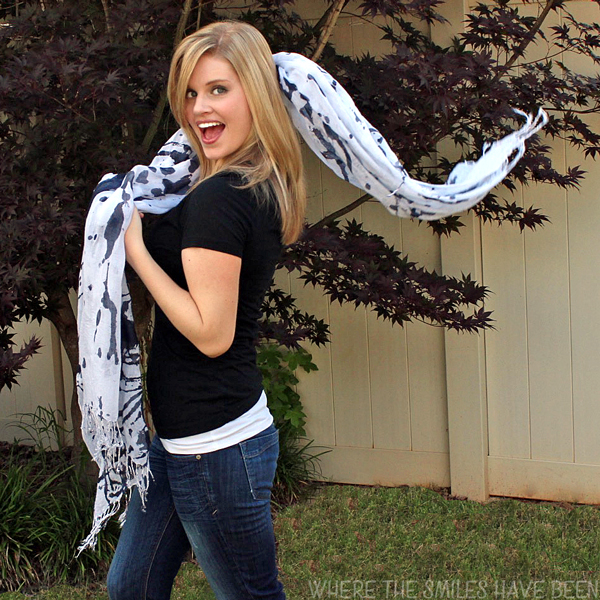 Here’s what the scarf looks like all spread out.  One side is more ink blotty than the other, which is kinda cool.  If I want to wear it so more white or black is visible, all I have to do is change the way I fold/bunch it up…..you gotta love adaptable accessories!

And forgive these, uhhhh….crazy angles.  My husband served as my photographer and we had our photoshoot one evening, then quickly followed it up with dinner and bath time for the little man.  When I was reviewing the pics later, I said to my husband “What’s up with these??  Why are they all wonky??”  He replied with “I was being *ARTISTIC*.  And you’re welcome.”  Wow, thanks hon….as we say here in the South, “Bless his heart.” 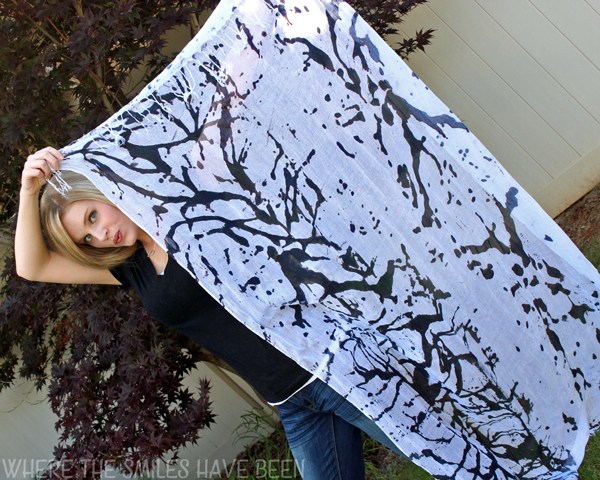 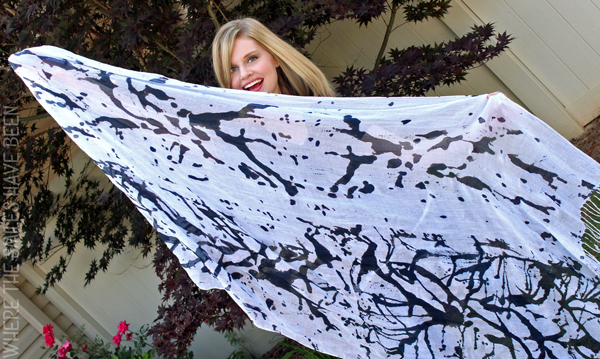 And just because my husband has a hard time taking anything seriously–something that I find both simultaneously endearing and irritating about him–here’s a series of outtakes from our photoshoot.  He kept saying “Show me sexy!!” while taking rapid-fire frames, so I gave it my best over-the-top-model-in-a-convertible-effort….and then immediately cracked up at how ridiculous I knew I looked. :)

Tips for Making Your Own Ink Blot Inkodye Scarf

If you’d like to give a similar project a try for yourself, here are some tips so you hopefully have more luck than I did:

If you thought Shark Week on TVland was the big event for this week, you thought wrong!  Nope, the blogosphere is where it’s at because lots of us crafty folks are taking part in the second annual SCARF WEEK!  Yes, we’re so very clever like that. ;)

Every day this week has a different theme related to all things scarfy…..I had hoped to take part in a few of the events, but alas, a traveling husband and energetic toddler didn’t allow for it, so today’s event is all you’ll be seeing from me.  Nuts!

The dyed, painted, and stamped scarf fun has only just begun though!  Be sure to chomp those scarf teeth into each of these inspirational D.I.Y. projects that are hitting the blog-o-sphere today!

{You can click on the images that tickle your fancy, or you’ll also find links below!}

2. From Drab to Fab: Stenciled Scarf Makeover by Creative Savings

6. How To Create A Brush Stroke Scarf by The Small Stuff Counts

7. Abstract Ink Blot Black and White Scarf Dyed with the Sun by Where The Smiles Have Been

9. Rorschach Inspired Art with Yarn by It Was Weekend

Here’s a glimpse at what’s coming up later this week! 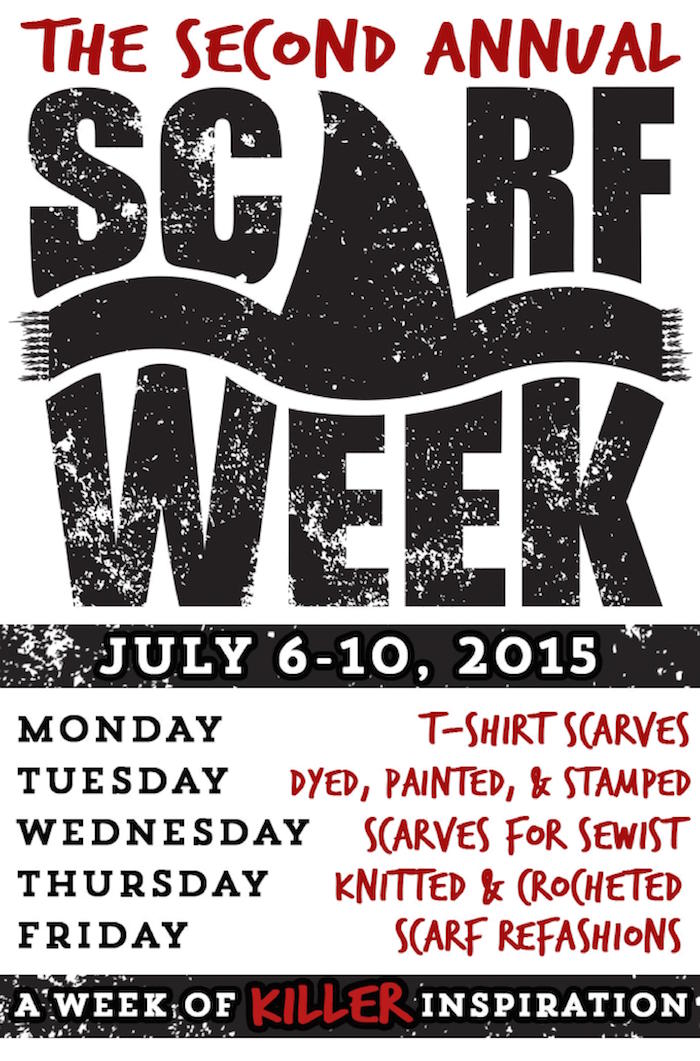 To access all five days of Scarf Week, visit our co-coordinators, Lauren from The Thinking Closet and Vanessa from Tried & True.  They’ll be updating their posts with the clickable collages as they go live this week.  And you can also follow along with our hashtag, #ScarfWeek2015!

Love the scarf! Perhaps if the entire scarf was evenly dampened with water before applying the dye, the folded method would work. There would be less resistance and the dye might sink through the fabric rather flow on top.

What a creative idea! Your scarf is beautiful, great job! Thanks for joining the Link-It To Me Link Party, I hope you will join us again this week! Pinning :)

Thanks so much, Chantal! :)

I think it turned out great! I have never tried inkodye, but now I might need to give a shot!

Thanks so much, Jamie! Yes, Inkodye is pretty fun....I know you'd think of awesome things to use it with!

This is so cute!! Love the final product - thanks for sharing! :)

Thanks so much for stopping by, Georgia, and the kind words! :)

Hi, Christine ~ I love your scarf! It turned out beautifully. You {and this post} are hilarious!! It's a quiet morning around our house {Hubs took the kids so that I could have some quality work time}, and I'm sitting here reading your post and laughing. Out loud. Loudly. For all of the neighbors to hear. :0) That text conversation between you and your husband is Classic with a capitol "C." I also love that you're doing "Scarf Week." How fun and creative! I've all ready ordered my scarf on Amazon and can't wait to get to experimenting. Off to check out the other scarves of "Scarf Week." Thanks for laugh and the inspiration! Have an amazing day!