I’m one of those strange folks who just can’t get into the coffee craze.  I know, I know.  Such a weirdo.  I don’t mind the smell of the stuff but I can’t stand the taste, even those cold blended varieties that try and trick me with their drizzles of ooey gooey caramel or rich chocolate upon fluffy whipped cream swirls.  Blech!  Not fooled.

However, I have recently discovered the wonderful world of hot tea!  It only took 30 years, but I’ve moved beyond my strict ice-cold-syrupy-sweet-tea-only rule (hey, I’m a good Southern girl).  Now I enjoy at least one hot cup daily.  And feel like such a refined, proper adult.

As such, I’m also on the hunt for useful (and especially) cute tea drinking accessories (this and this are big faves!).  And what is more appropriate for a tea (or coffee…or hot chocolate) drinker than fun MUGS!  I know!

I decided to jazz up a store-bought mug with a playful motivational saying.  Because vinyl.  And what better way to start your day off right than sipping a hot cup of cheer AND some booty shaking!  Although ideally not at the same time.  That could be dangerous. 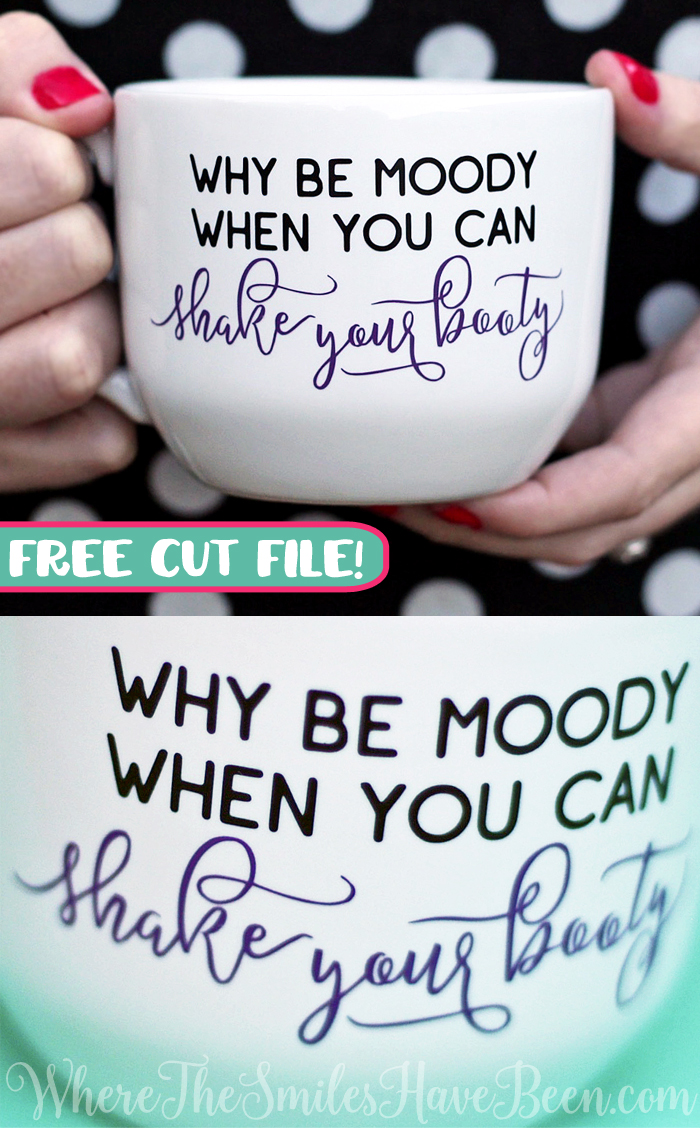 [Many thanks to The Hungry JPEG for sponsoring today’s fun!]

I was scrolling through Pinterest one day and came across this pin with such a fun saying:

Why be moody when you can shake your booty

It was instantly saved to my Wordy Inspiration board, and I decided to use it for this project.  It’ll be perfect to see in the morning after steeping my morning cup of goodness, and is bound to start my day off right.  I like how it’s positive and uplifting, but not in a cheesy way.  No clichés for this gal.

So I fired up Silhouette Studio and got to designing!  Here’s what I came up with: 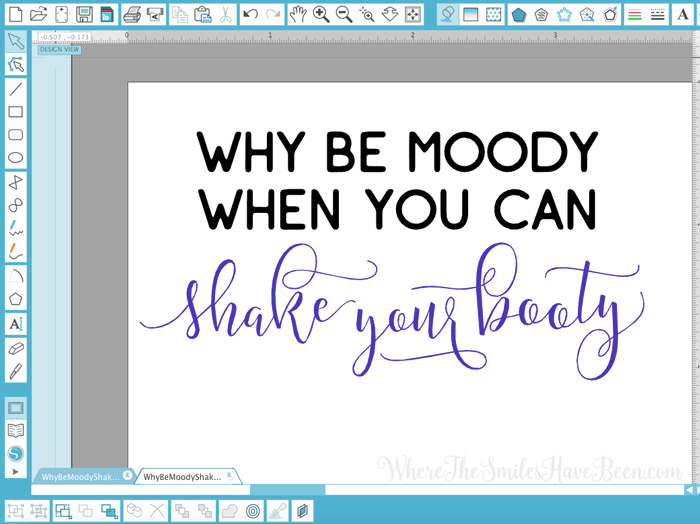 And because I know a lot of you are font junkies like me, I’ll save you from having to ask for the names of these fonts.  You’re welcome. ;)

Both fonts are part of The Hungry JPEG’s December bundle!  You all know by now that I am a HUGE fan of their monthly bundles.  They are jam-packed with goodness and are such incredible deals!  I made this sign with their September bundle, this fun decal with October’s, and this piece of holiday decor with November’s (the first two also have free cut files for ya!).

And here’s everything that’s included in December’s fun: 30 fonts and over 1500 graphics.  See what I mean…amazing!

And you’re in luck because you can save 20% with the discount code Smiles20!  Hooray for coupons!  You gotta hurry though because this bundle is only available for the month of December then poof!  It’s gone. 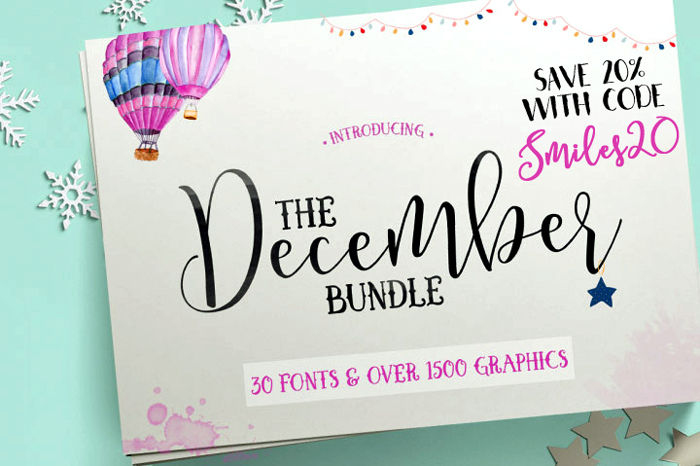 Ok now, back to this mug of wonder!

The super pretty swirly twirly font is called Amberlight.  Isn’t it so fun??  I’m obsessed with all those swashes and alternate characters, and the best part is that you don’t need any special software to access them!  Yep, just like it states on the bundle details, all of the glyphs for this font are 100% accessible to everyone.  Woot!

When I typed out my phrase, it was pretty as is, but I decide to swap out most of the letters for alternate characters that had, well, more character.  The only letters that remained unchanged were the h, a, y, o, and u.  All the rest, including the double o in “booty,” got swapped out.

Here’s how I did it on my Mac: 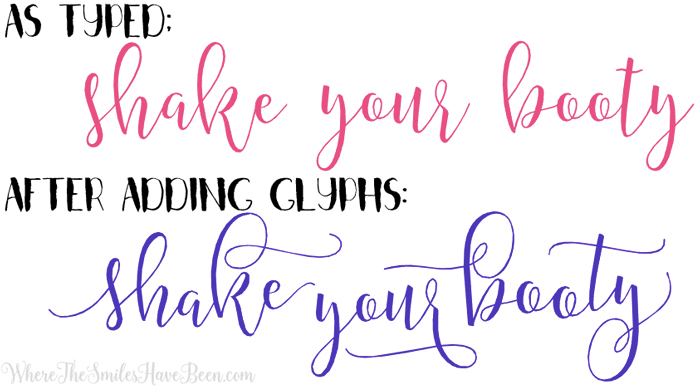 The other font that I used for the first part of the phrase is also part of the December bundle, this one called Pathfinder.  It’s more basic and paired nicely with the fanciness of the handwritten and swirly Amberlight. 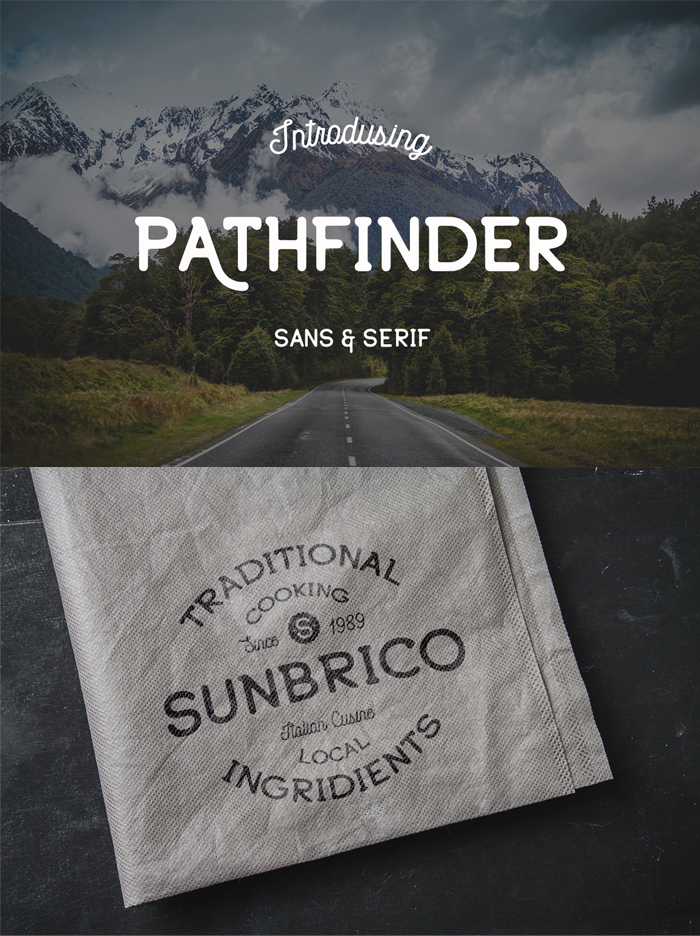 Now that my design was ready, I cut it out with my Silhouette Cameo in some permanent black and purple vinyl.  I had originally wanted to use pink instead of purple so it would really POP off the mug, but wouldn’t you know it that I have all the colors of the rainbow in nearly every shade on hand….except bright pink!  Nuts!  Hopefully Santa brings me some for Christmas in a couple weeks. #onthenicelist

I then headed to Target and snagged a basic white mug for just a couple bucks.  When my husband asked why I was buying a new mug when we already have several plain ones in the kitchen, I said “Yeah, but I want one that is short and chubby.”  To which he replied “So like a Danny DeVito mug?”

All that was left was applying the vinyl!  And if you’d like more details on this step, check out my Project Gallery….I’ve got LOTS of other posts with full tutorials, like this one! 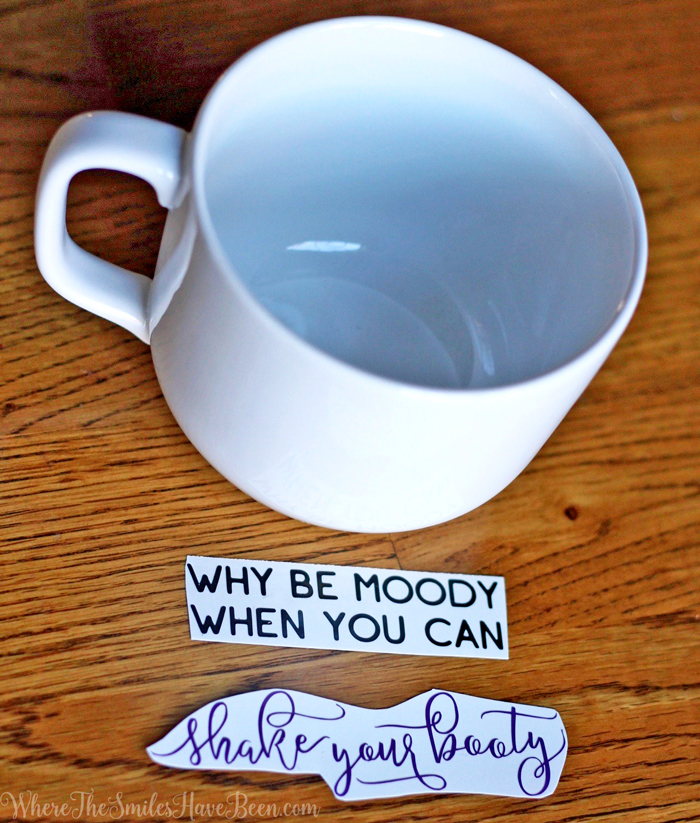 The Completed Shake Your Booty Mug!

And here’s my mug with the decal applied!  I just love it.  I makes me chuckle and certainly puts me in the right frame of mind each morning….and encourages spontaneous kitchen dance parties with my two-year-old.  What’s better than that? :) 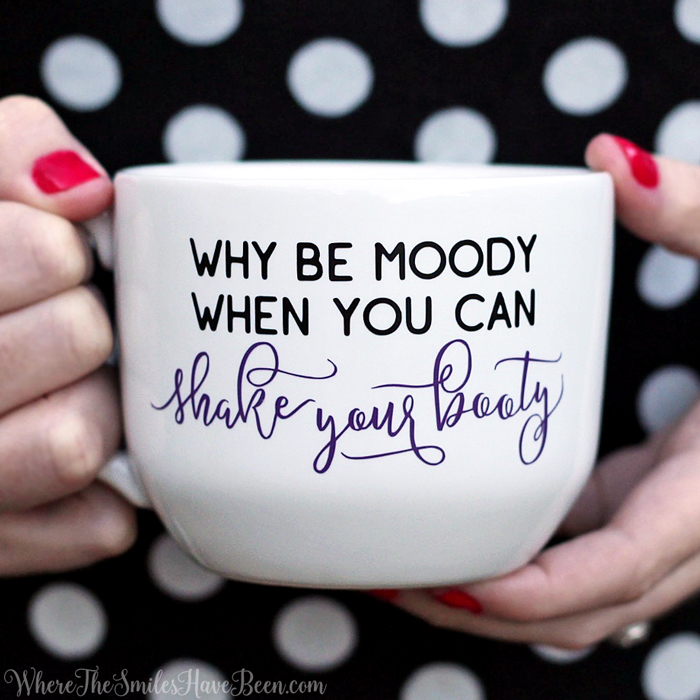 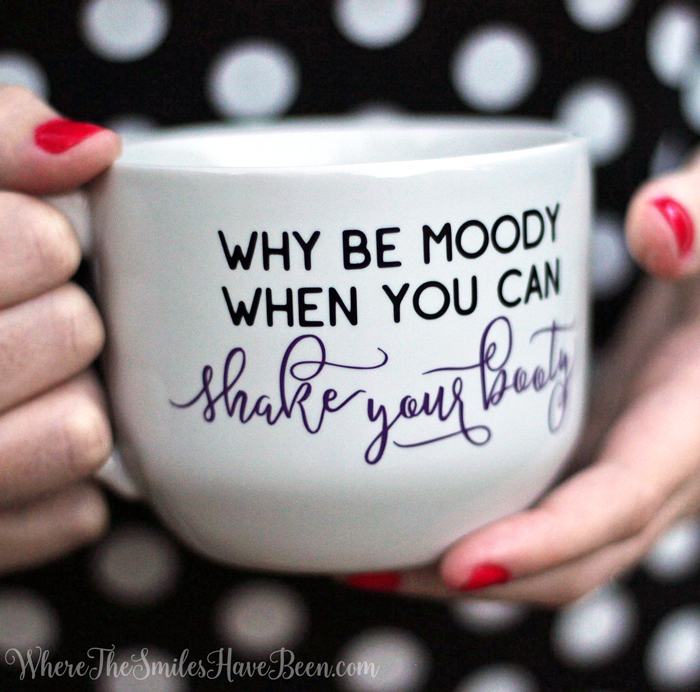 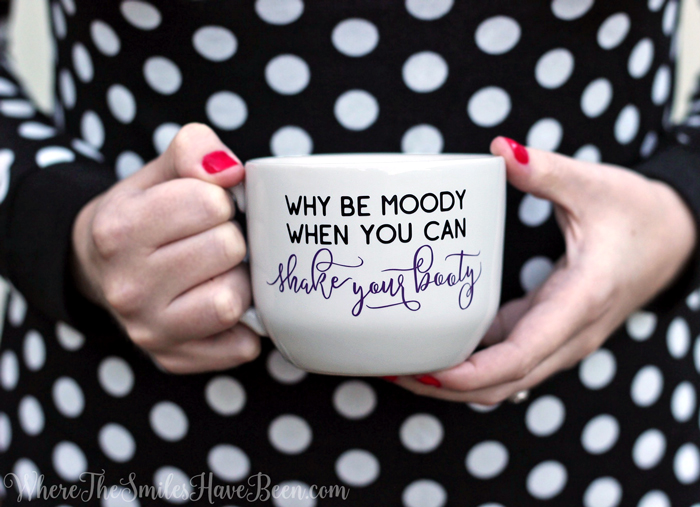 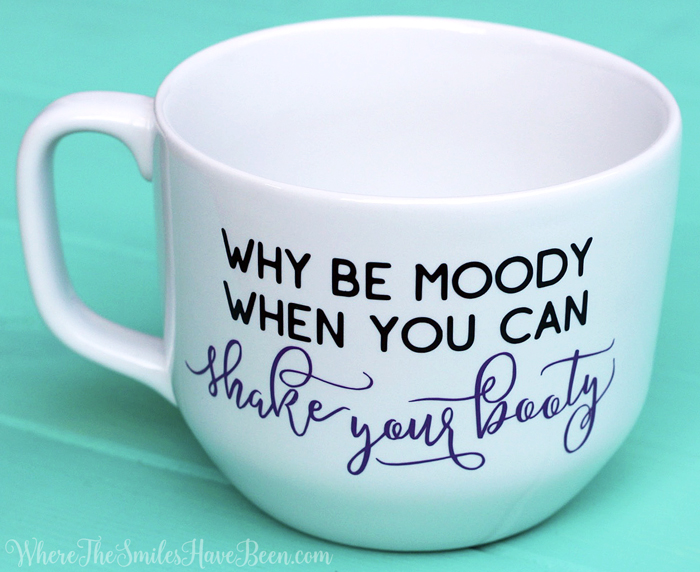 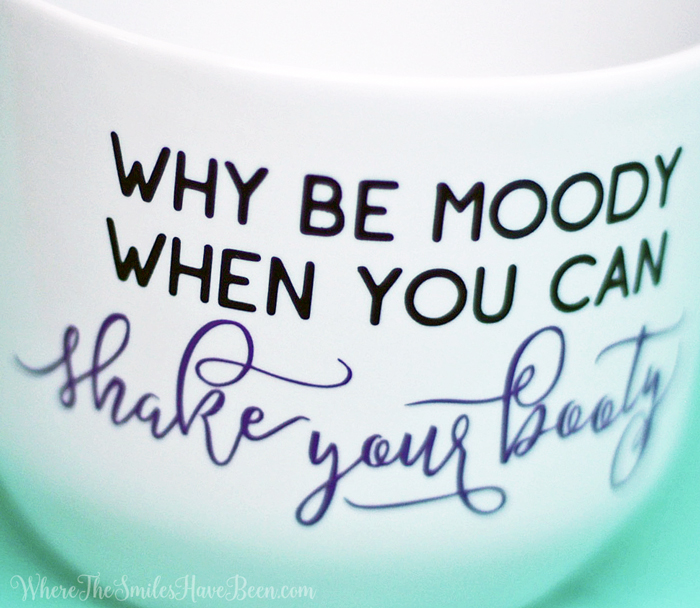 If you’d like to use this phrase for a project of your own, feel free to download my design!  I think it would be lovely on not only drinkware but also shirts, totes or makeup bags, or even as a motivational sign.  Lots of options. :)

A note about this file: When you open it up in Silhouette Studio, you’ll notice two sets of the “shake your booty” portion.  Since I cut this out as a small decal, I needed to thicken up some of the swirly parts so they would cut correctly.  That is the phrase on the cutting mat.  The other one that is off to the left of the mat is the original, non-thickened set in case you’re cutting it on a larger scale.  Pick which one is more suitable for your project. :)

{THE FINE PRINT: This file is for PERSONAL USE ONLY. Thanks!} 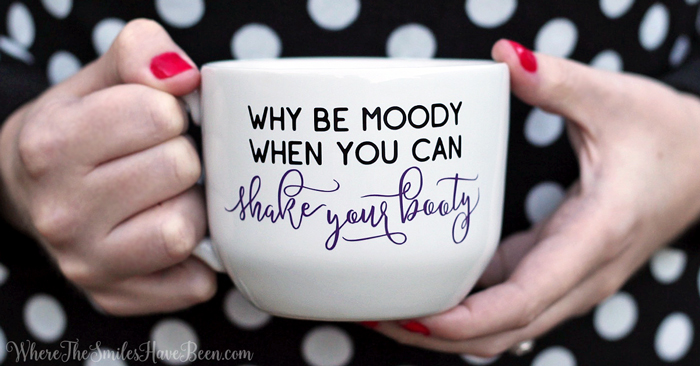 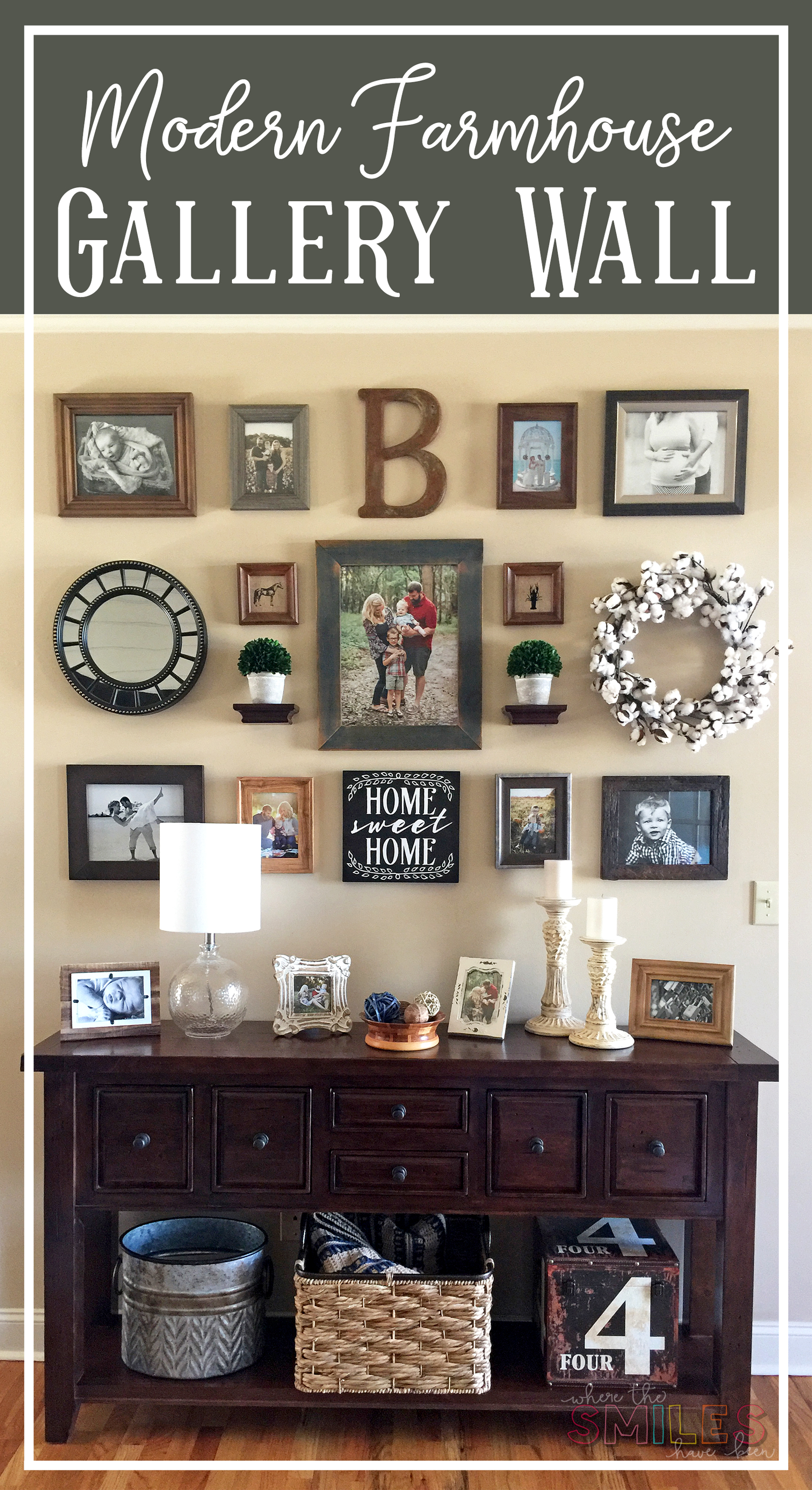 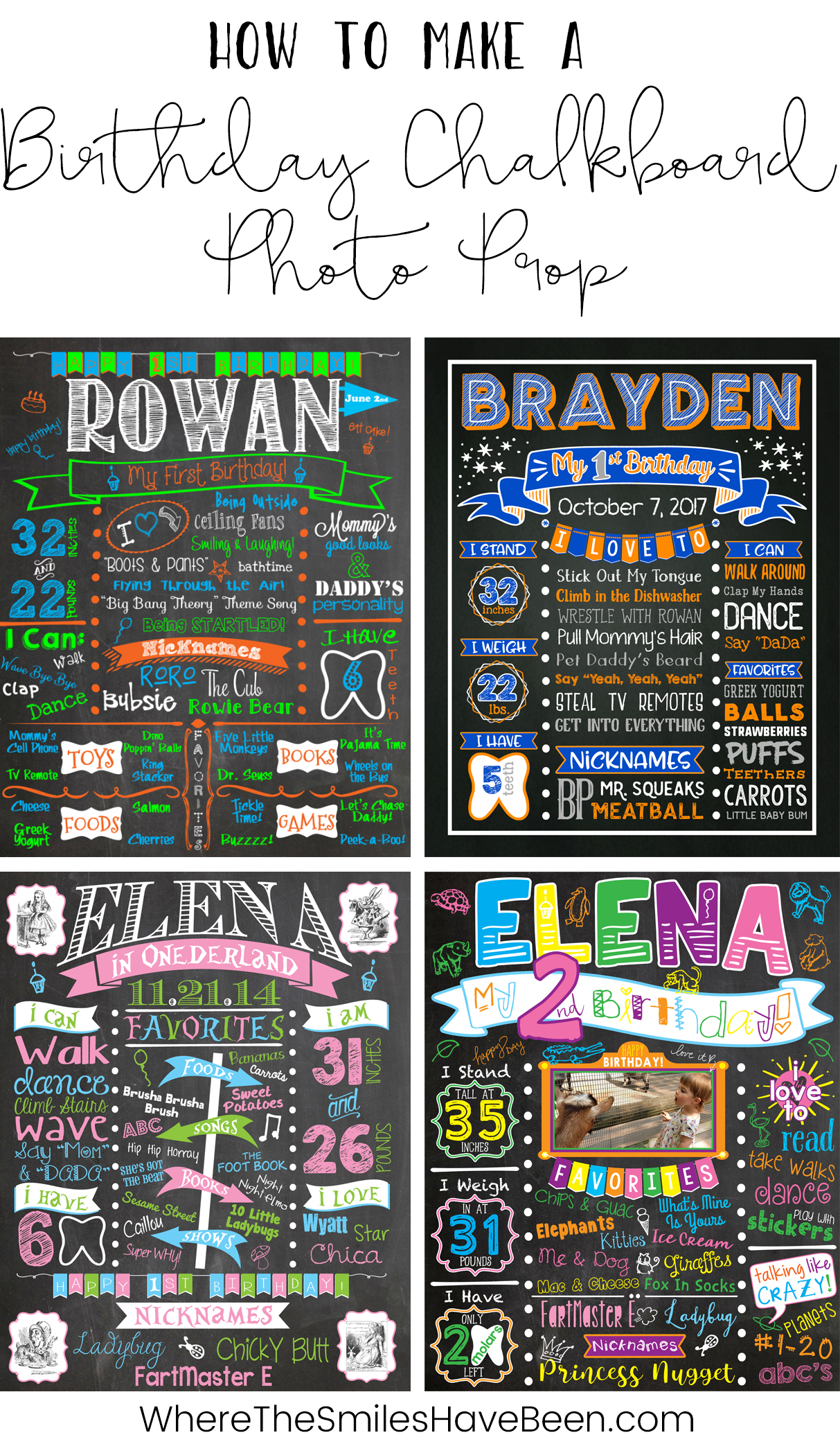 Thanks so much for stopping by!  Don’t forget to shake your booty! ;)

Love this design and phrase! I am new (cricut owner) - is this available as an SVG file anywhere?

This is so cute! I just bought a Silhouette, and still learning :) Will this vinyl stay for washing in a machine? (Really hoping as I hate to hand wash :p ).

Hi Liv! Yeah, I feel ya on the handwashing hate. ;) Unfortunately I would recommend it with this. The vinyl cuts are so thin and tiny that I wouldn't trust it in the dishwasher. Maybe if you're feeling frisky, try it without heat? If so, let me know how it turns out! (And congrats on your new Silhouette!)

I think this mug is so cute! I immediately tried to make it. I got the first phrase to weed perfectly. I tried 7 times with the cursive part and all of them tore. I am using Oracal 251. Tried lots of different settings. No luck! Any tips?

Hi Cindy! I used a brand new blade for this project since the cuts would be super tiny, and I also bumped my speed way down. My vinyl was Oracal 651. You could also try increasing the size a bit, doing another external offset, or manually adjusting the part(s) that are tearing with the Edit Points tool to make them thicker and sturdier. Hope this helps and good luck! :)

Christine! This mug is soooo cute, I love the sass! We shared it for our Mega Christmas Guide under giving the gift of warmth. I also read recently that you've got big changes up your sleeve for the blog, we can't wait to see what you surprise us with next :)

Wahoo! Thanks for sharing this, girls! I'm so glad you like the sass too. ;) And yes! I DO have some big changes planned for the blog....just gotta find the time to implement them all! :D

I love, love, love this mug! A friend of mine just got certified to teach Zumba so I am going to make this as a congratulations gift. Thank you SO much for the awesome cut file and for saving me a ton of work! Hahaha! I love your blog/facebook/instagram posts. You're so creative and so inspiring!