Learn how to repaint metal porch railings and add instant curb appeal to your home! It’s an easy DIY project that even a non-pro can knock out in a weekend! 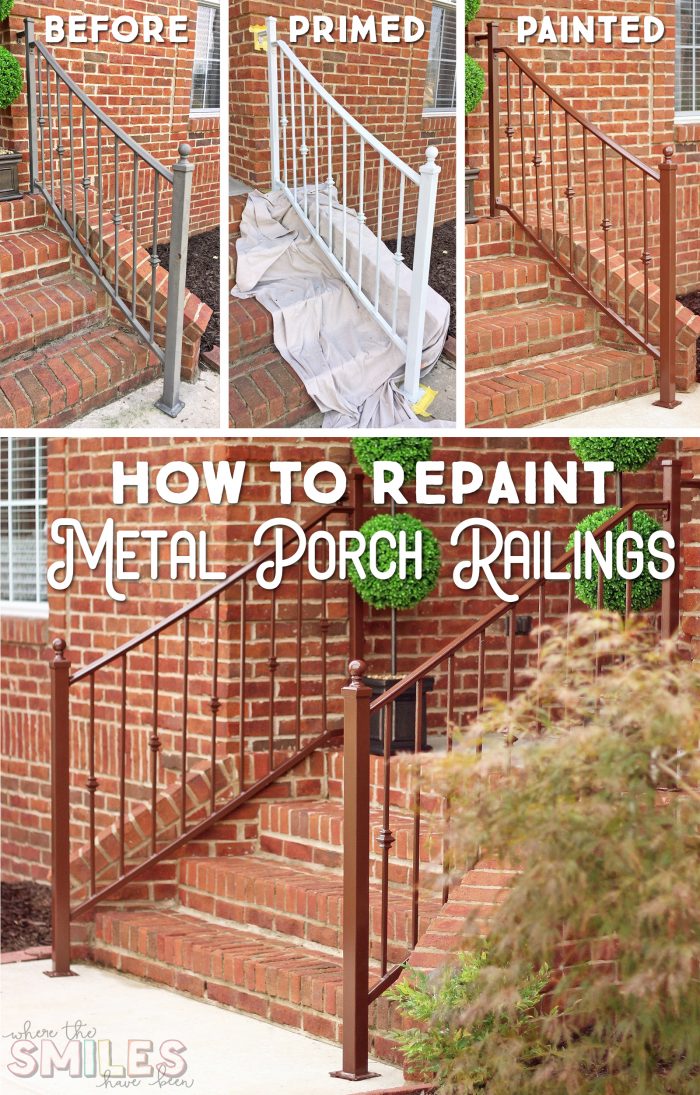 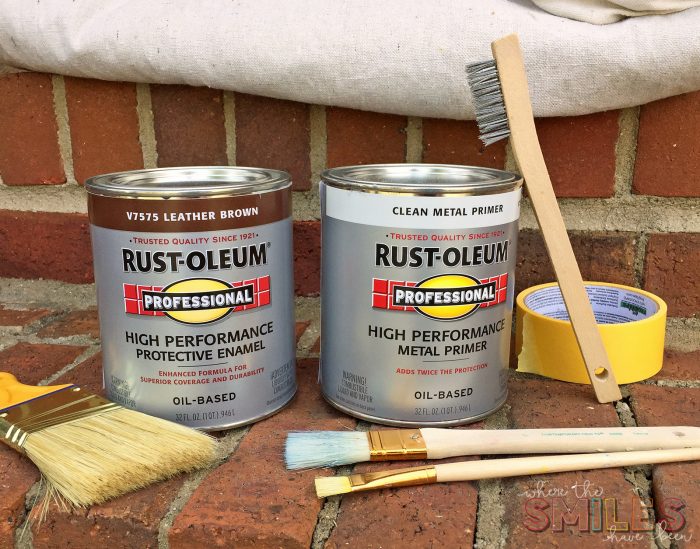 So here’s what we started with. Blech, I know. We were in desperate need of a little porch makeover, for sure.

Not only were the railings looking all weathered, dull, and rusted in spots, but the steps and sidewalk were in need of a good pressure washing too.

The only redeeming qualities about our porch were the pair of cute topiaries as well as our colorful ‘Happy Everything’ door hanger.

Lipstick on a pig, y’all… 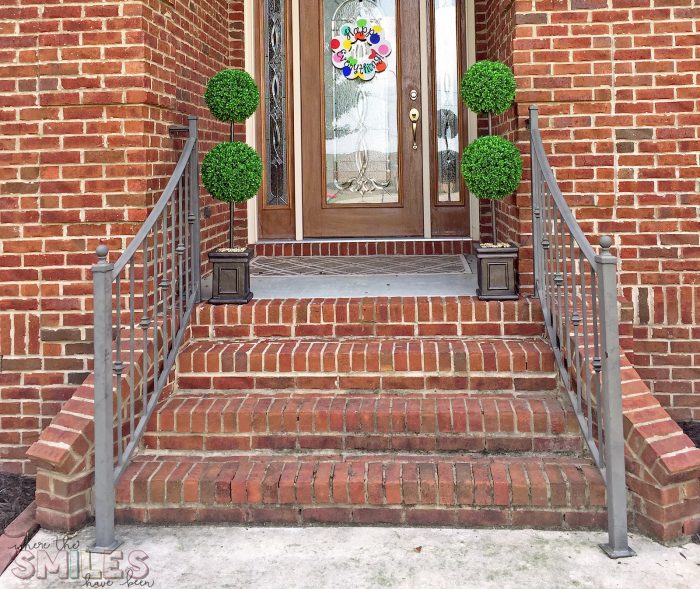 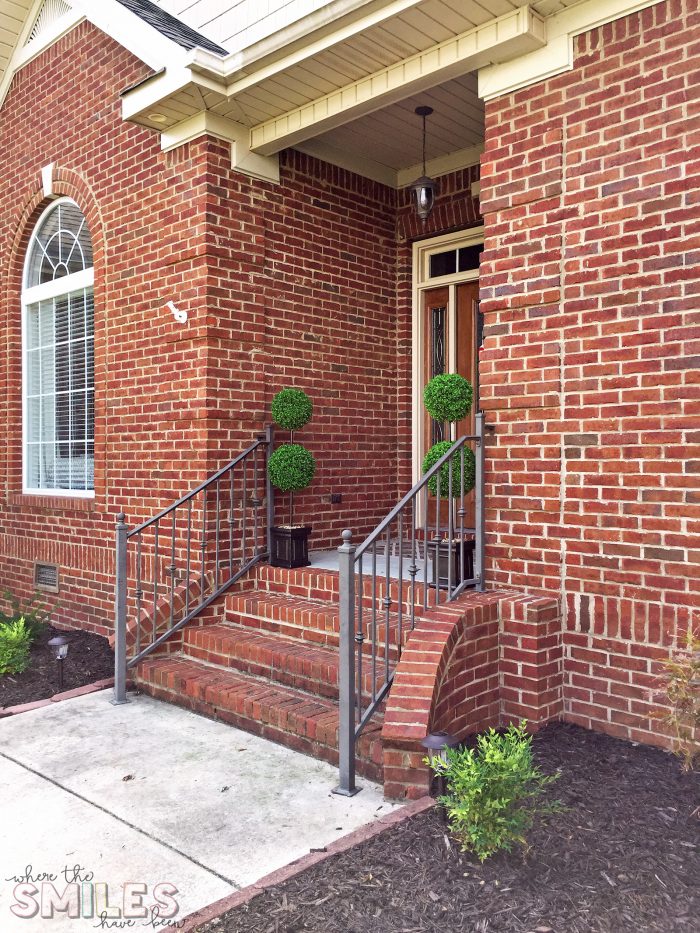 For even MORE lipstick on a pig, check out our fall porch decor from last year! When I see these pictures now, I cringe over those railings….yeesh. 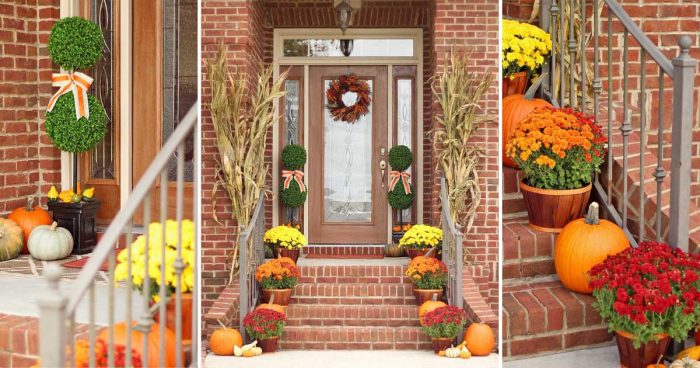 While the railings were in poor shape, they actually weren’t too rusted (this is why I went with the clean metal primer instead of the more intense rusty metal variety).

The left railing surprisingly didn’t have any rust at all (wahoo!), and the right one had several spots that started out small, but once I hit them up with my wire brush, boy, did that change! More on this below. 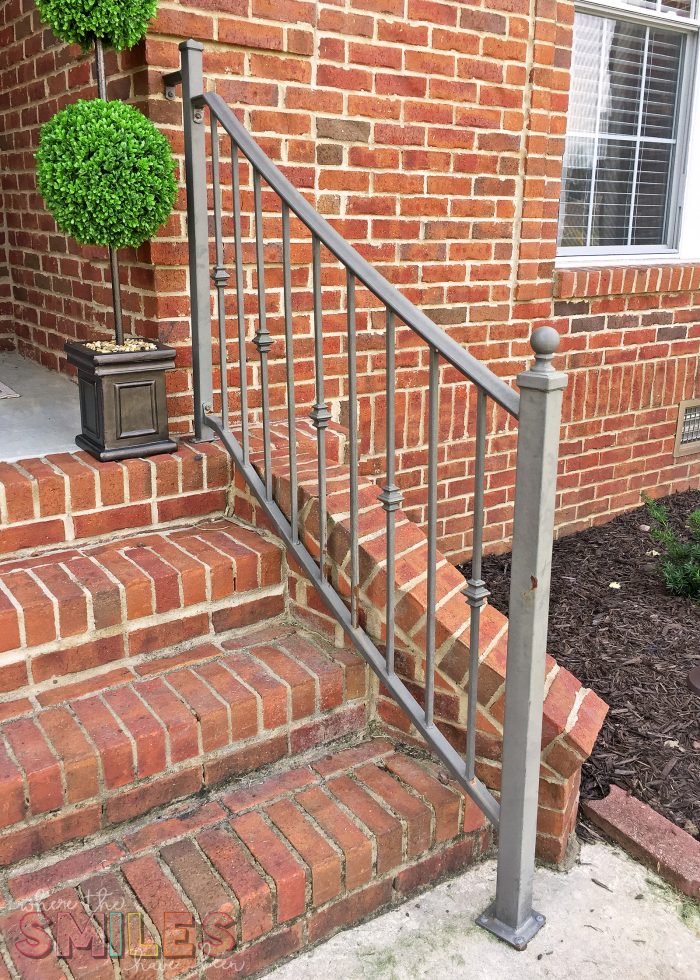 Even though Mr. Lefty didn’t have any rust showing, he was still looking extra faded and dull. I mean, you can see all of my little one’s adorable handprints, and I’m pretty sure that’s not supposed to happen.

I have enough fingerprints and smudges all over the inside of my house, so I’d like to keep these railings free of all evidence that tiny monsters reside here. No need to prematurely terrify visitors. 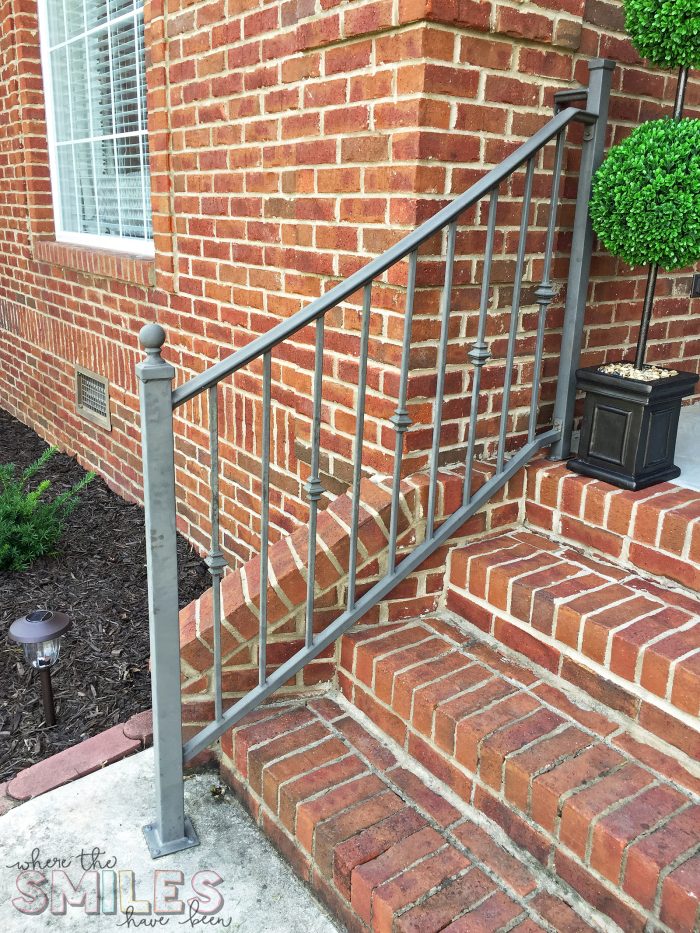 So the first step in this project was obviously prepping the railings for their upcoming makeover. Operation Prep is my least favorite step in any project, and this was no exception. It wasn’t hard, just took some time (I mean, who enjoys cleaning, especially BEFORE you even start your project??).

This prep entailed grabbing a cheap wire brush and getting my scratch on.

I hit up all the rusted areas really hard and heavy until there weren’t any more flakes or gray coating falling all over the place and the edges were pretty smooth. 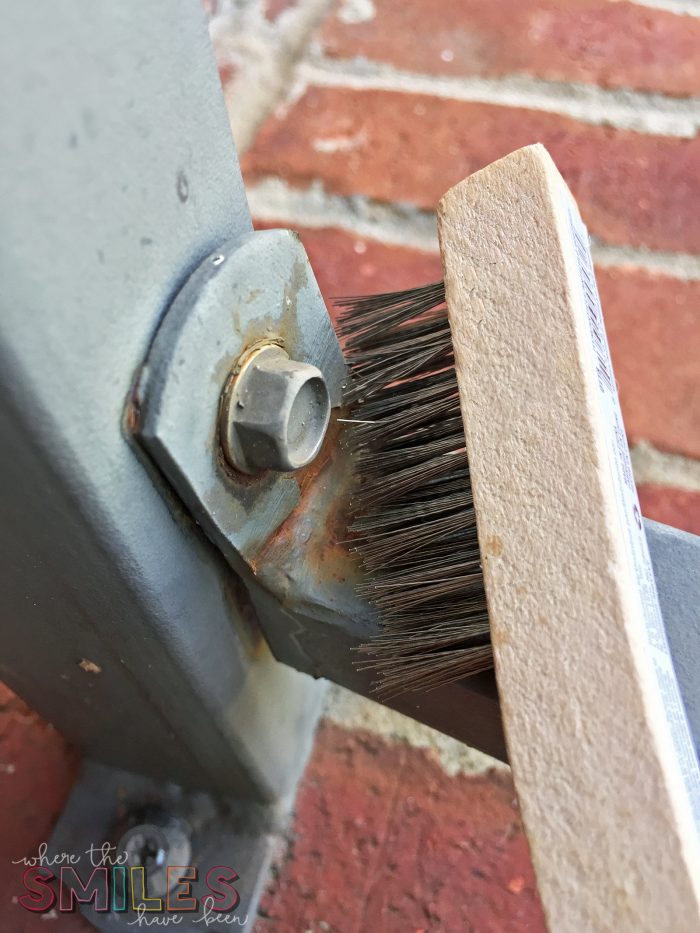 Below you can see how there was actually more rust than first met the eye (but thankfully, not too much bird poop). Ole Mother Nature is sneaky!

That Alabama rain and humidity crept right on in over time and did a little number behind the scenes in some spots. However, the wire brush took care of it, no problemo.

You could also go over spots like this with some sand paper if you’d like, but since I wasn’t super concerned with getting a finish that was as smooth as my one-year-old’s hiney, I didn’t bother.

Plus, it actually felt smoother than it looks, and I figured that one coat of primer and two coats of paint would make it smooth enough in the end (and spoiler alert: it did!). 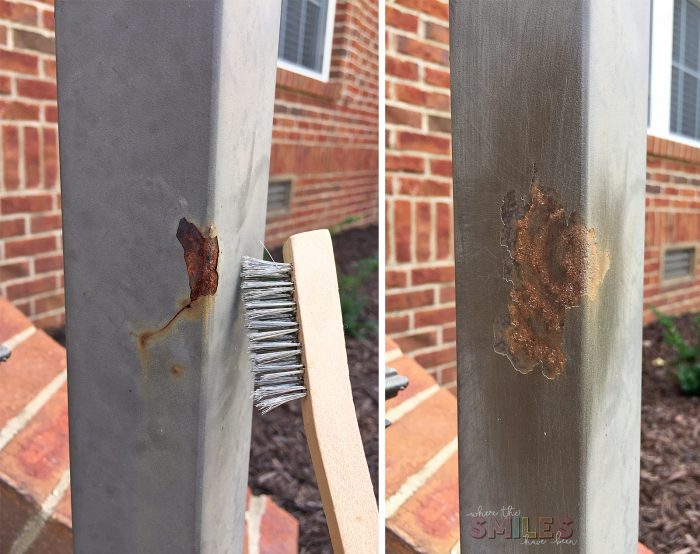 The same thing happened on one of the skinny spindles near the middle of the railing.

At first, the rust seemed to be confined to mainly the bottom outside area… 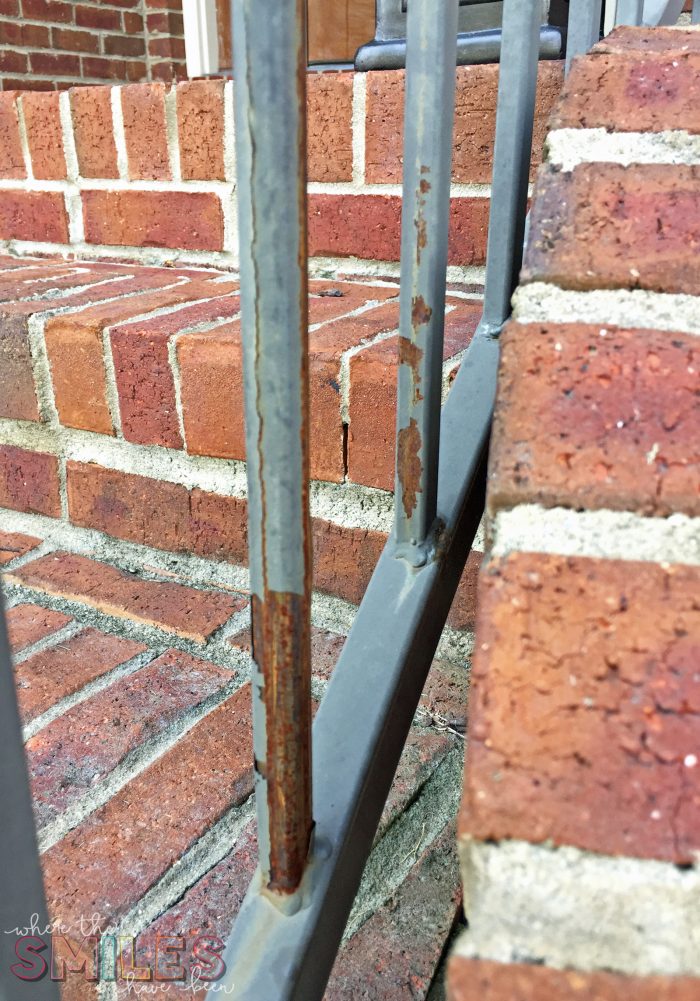 …but after giving it some love with the wire brush, over half of the original coating just flaked right off! The poor fella looked quite naked (and shiny) next to its kin. 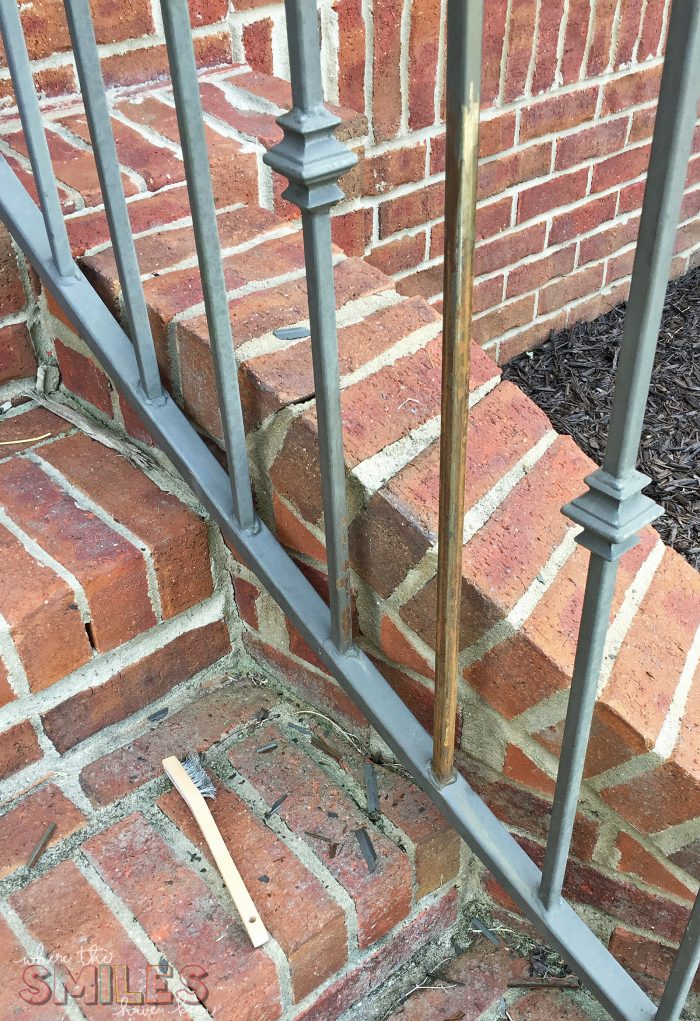 Next, it was time to clean up the mess I just made…which was even less fun than Step 1.

I grabbed a bucket and filled it with some slightly soapy water, then gave all the railings a good scrub down using a sponge. Then I hit up everything again with some fresh, non-soapified water to make sure there wasn’t any residue left behind.

A nice solid, clean surface for the primer to adhere to was the name of the game. 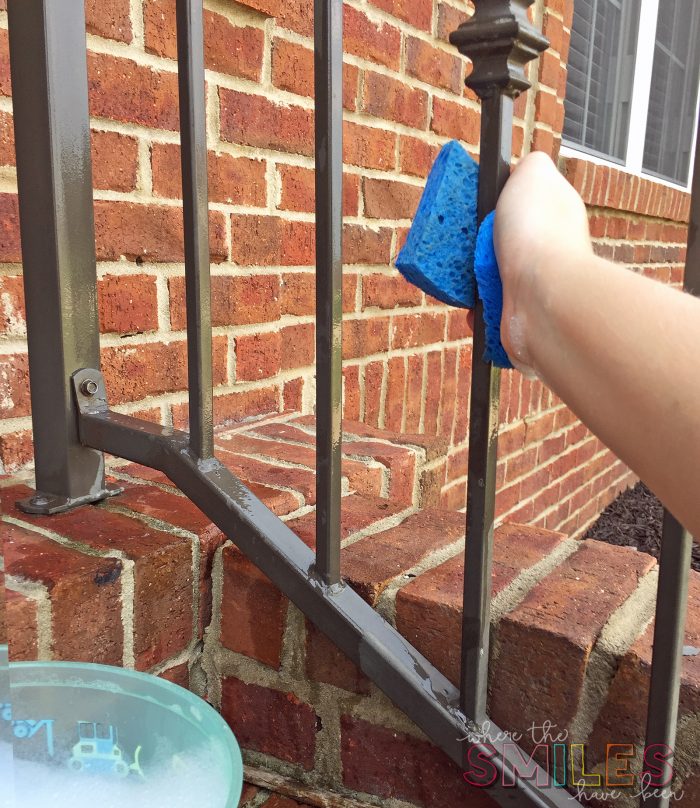 After the railings dried, it was time to prime!

Since I tend to get a little crazy when I get my paint on, I first applied some painter’s tape around all the areas where the railings attach to the brick and sidewalk.

A couple drop cloths were also spread out underneath the railings to protect the steps and small side walls. 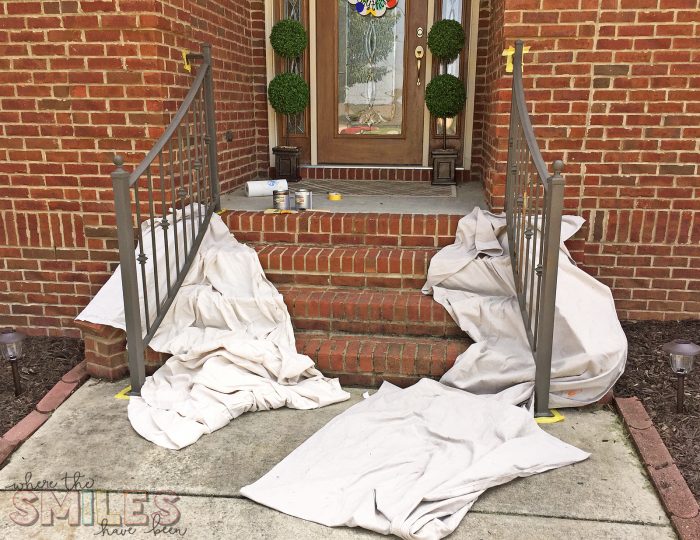 Then I opened up the can of clean metal primer, and using a small cheap paint brush, started brushing it on. (It’s also available as a spray, but I didn’t want to risk wayward streaks all over our brick, or spend extra time on prep.)

The clean metal primer can be applied over bare, lightly rusted, or previously painted metal, which is what we had. If you have heavily rusted metal, you might want to consider using rusty metal primer instead.

This was my first time using an oil-based paint, and at first I was concerned about the visible brush strokes. However, they went away once dried (so don’t worry if the railings look a little like a kindergartener’s art project at first). 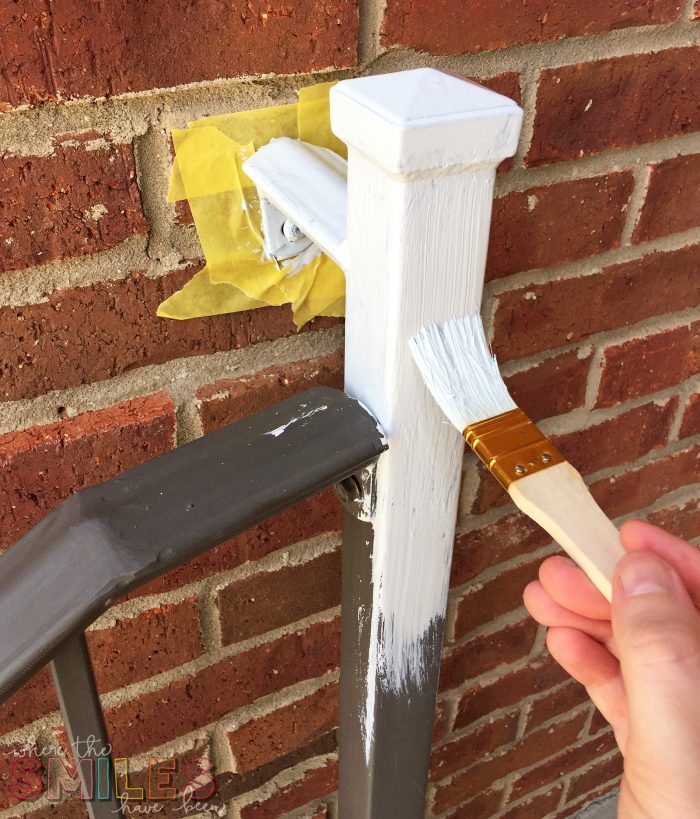 This step was the longest one in the whole project, and in total, the rust removal, cleaning, and priming took a few hours on a Saturday morning.

Once I was finished with this portion of the project, I headed inside so the primer could dry (and to have some lunch and a nap).

So these bright (and I mean BRIGHT) white railings were on full display for roughly 24 hours so they could dry completely. I wonder what our neighbors thought…

I jokingly told my husband that I liked them like this and decided to leave them with just the primer. His side-eye of disapproval told me he did NOT find the humor in that suggestion. 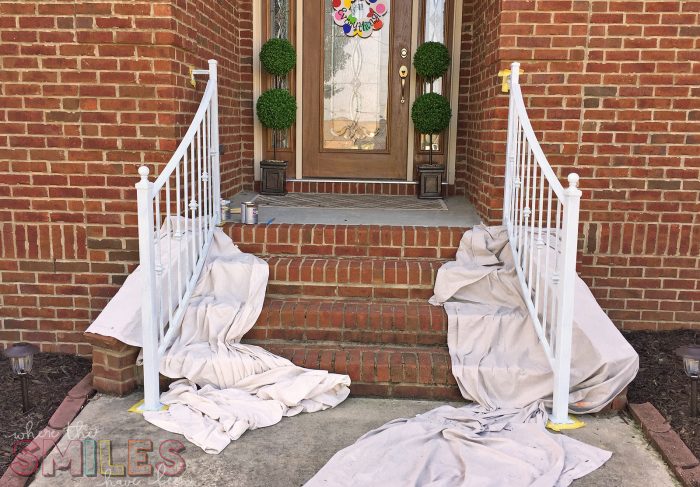 Step 4: Painting on the Enamel

When Sunday morning arrived, it was finally time to apply the brown enamel. We thought this color would go well with our red brick and oil-rubbed bronze light fixtures.

The first coat went on really smoothly, but once again, there were visible brush strokes. 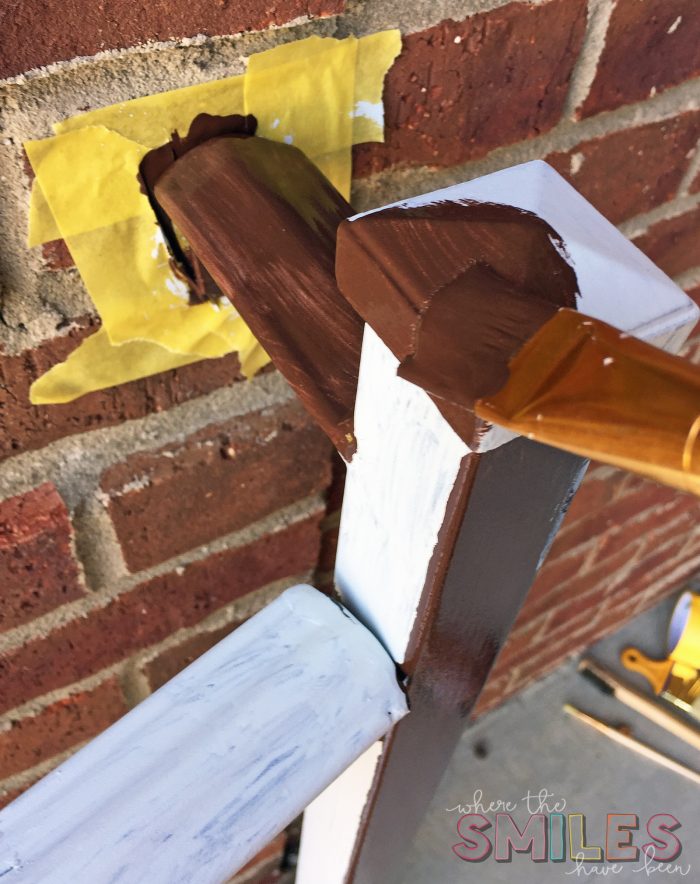 I found it was easiest to do the spindles last, so I knocked out the larger areas first.

Even after only partially applying one coat, it was already SUCH an upgrade. The new color and glossy shine were looking so nice!

After applying the first coat of brown enamel on both railings, I once again headed inside for a lunch break (but sadly, no nap this time). A couple hours later, I went out to check and see if they were dry, and since they were, I started on coat number two.

This time…no brush strokes! Everything went on so smoothly and we were left with a glossy, solid color. 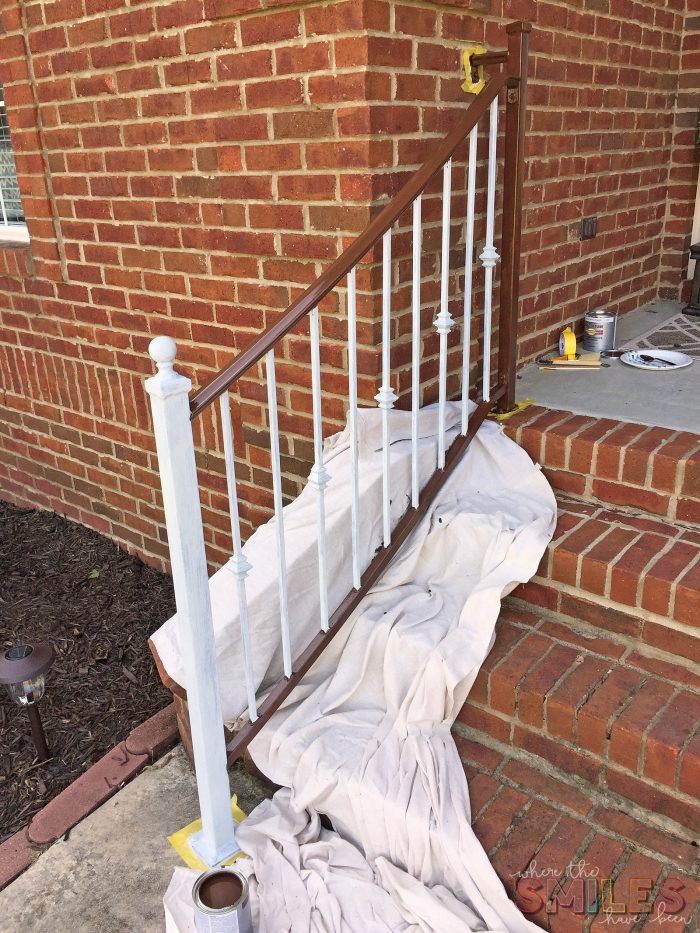 And here’s how the railings look in their new glossy brown glory! SUCH an improvement.

No more rust. No more faded weathering. No more sadness. 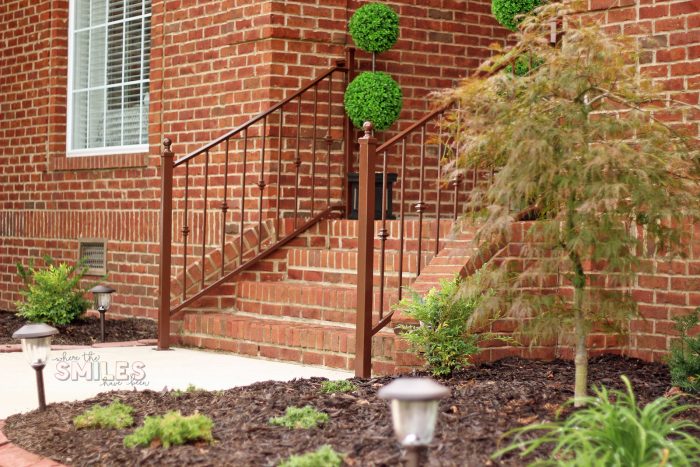 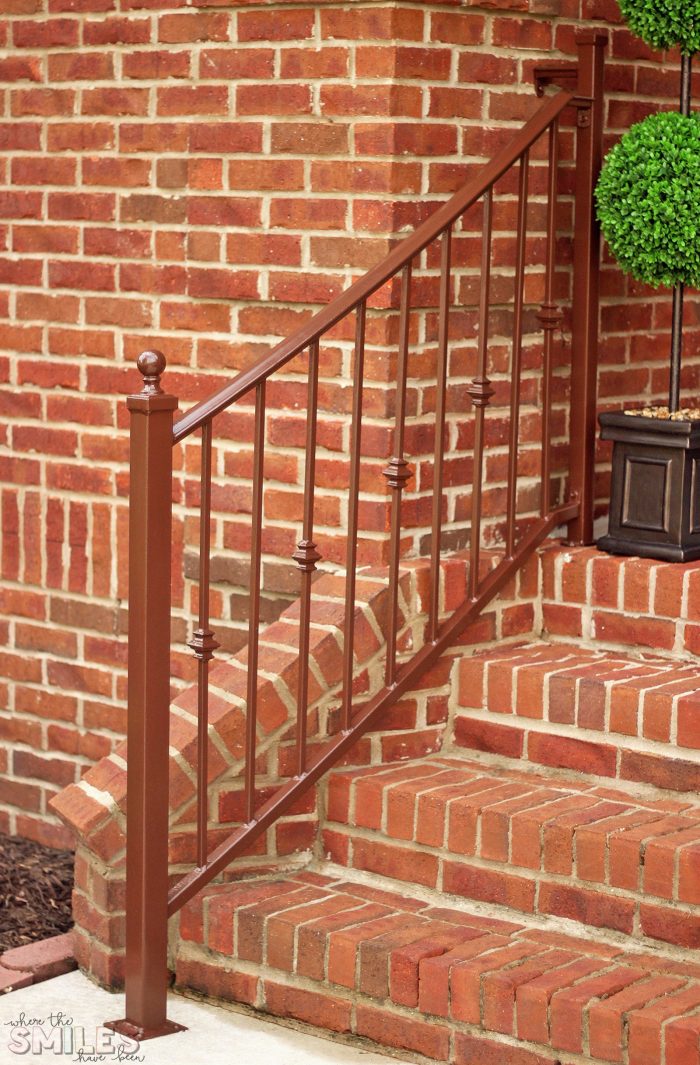 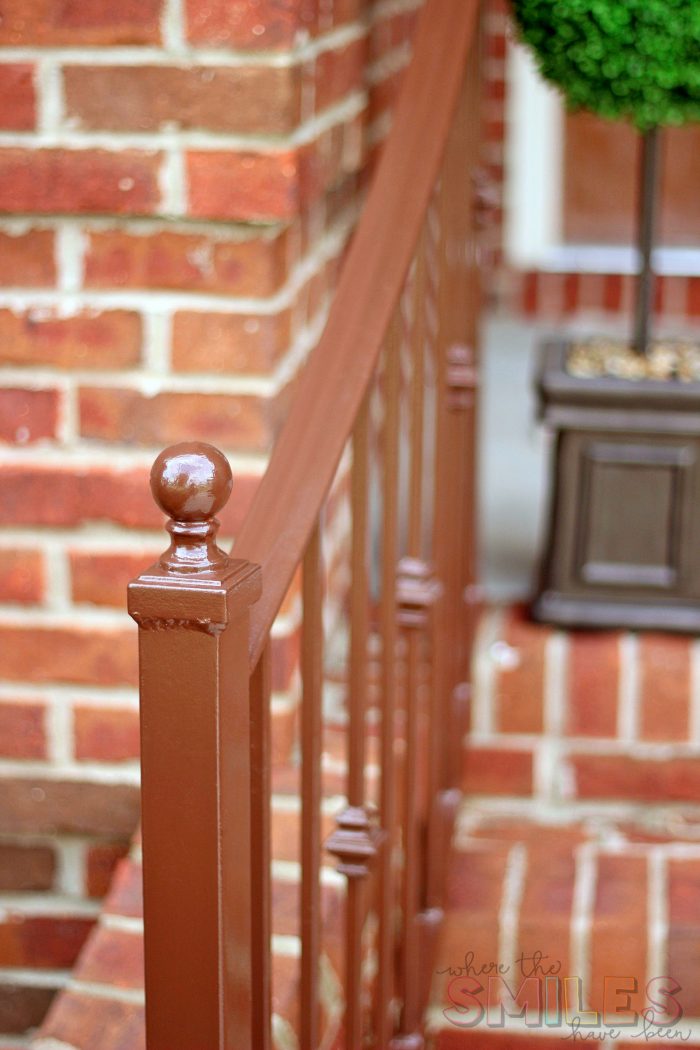 All in all, I spent around five to six hours in total over two days on this project, and most of that was spent in prep and priming.

Each subsequent step went by faster than the previous one, so the most tedious part was over in the beginning.

This was truly a simple DIY home improvement project that has made such a difference in the curb appeal of our home (along with the pressure washing on our steps and sidewalk, and a new porch pendant!).

Not only do the railings look so much nicer now, but we also no longer need to worry about future rusting. I am so thrilled with how they turned out, and how easy their makeover was! 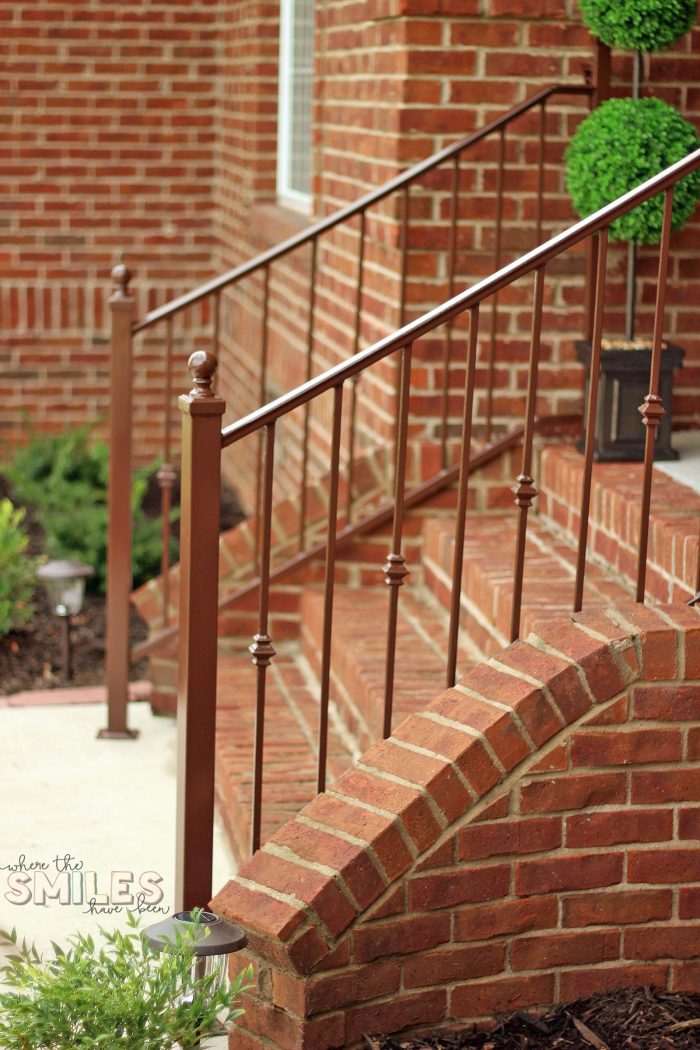 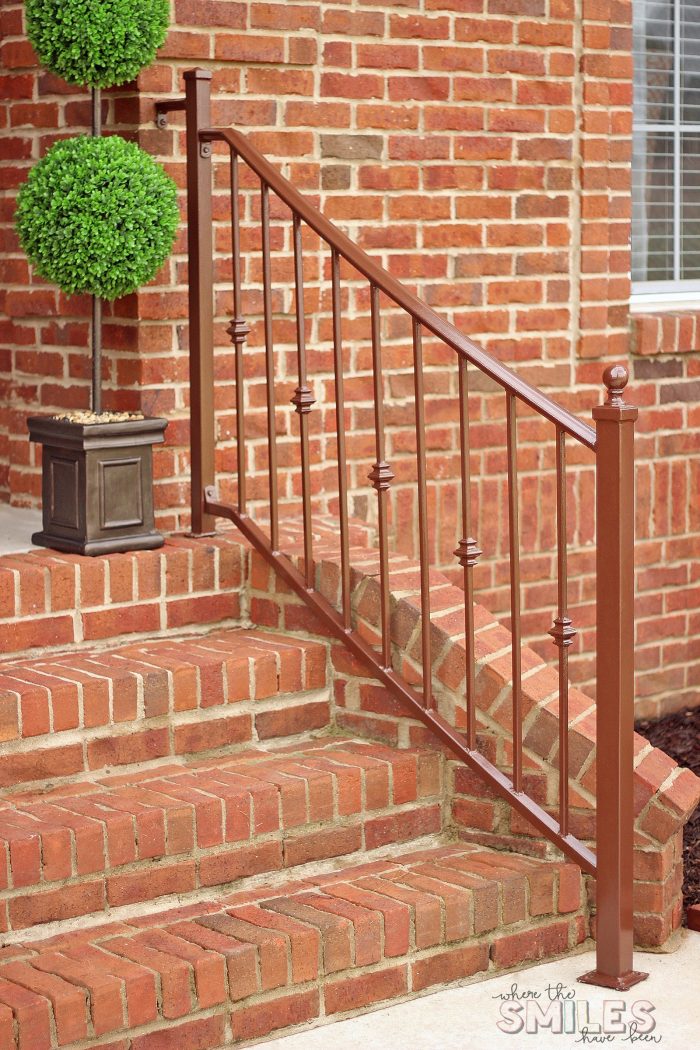 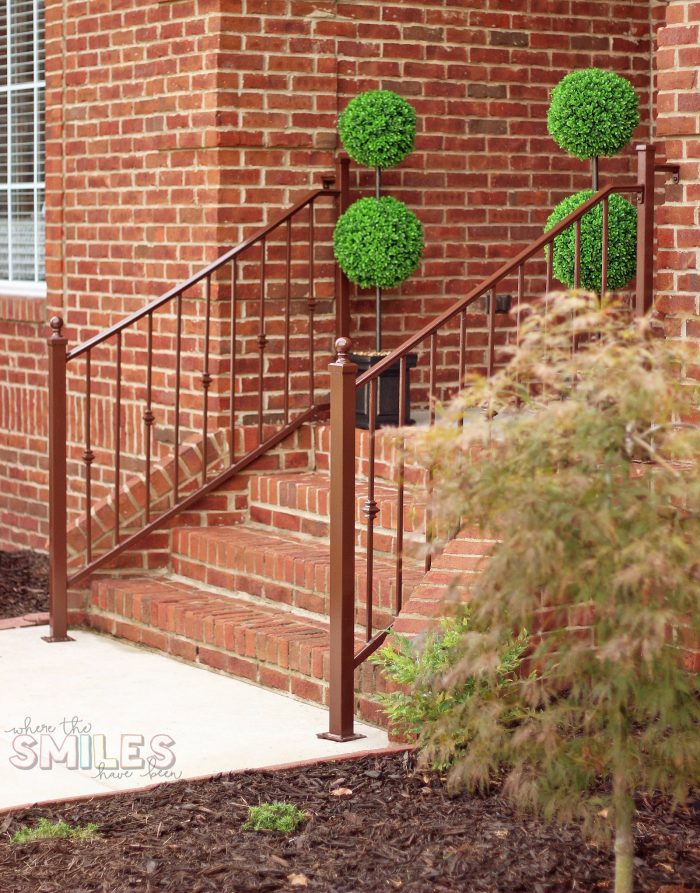 My assistant also approves of the upgrade. :) 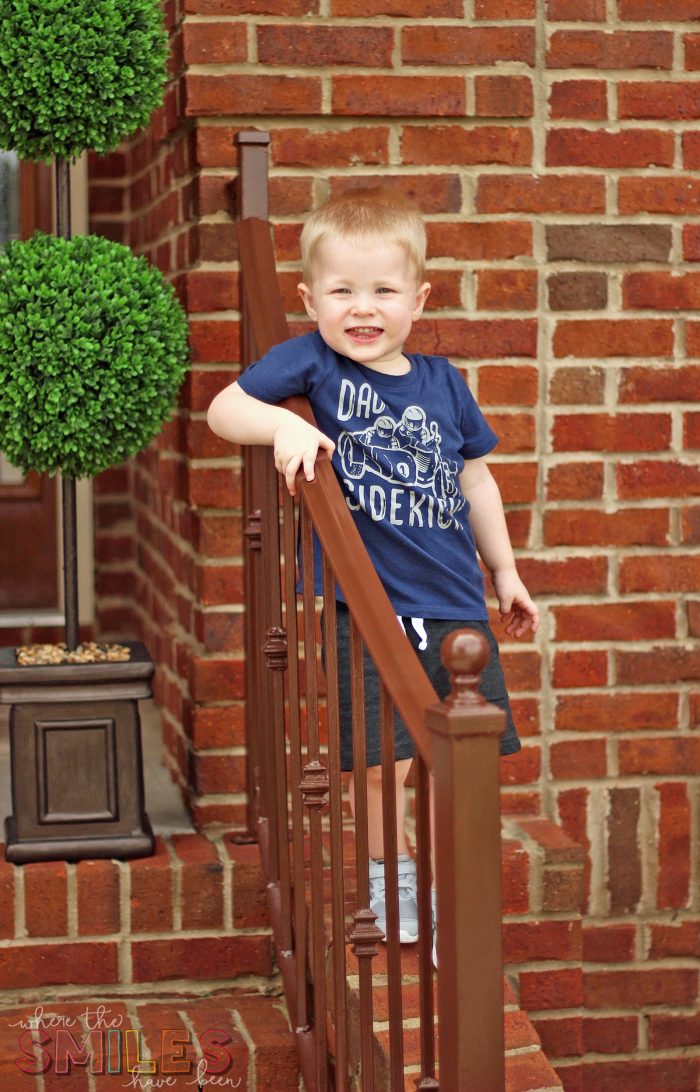 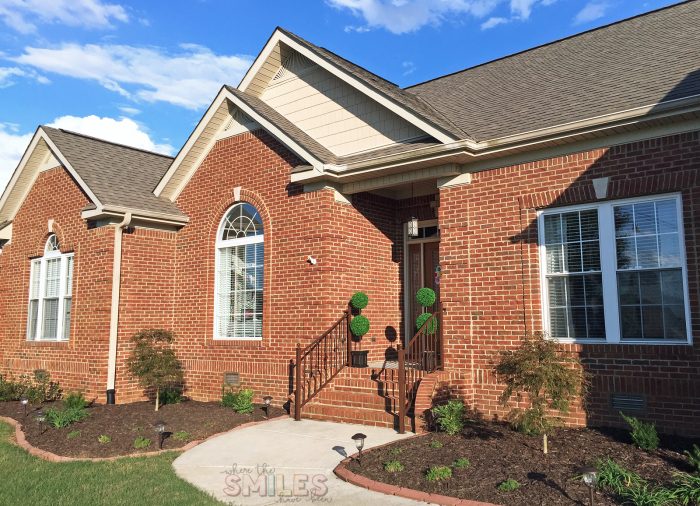 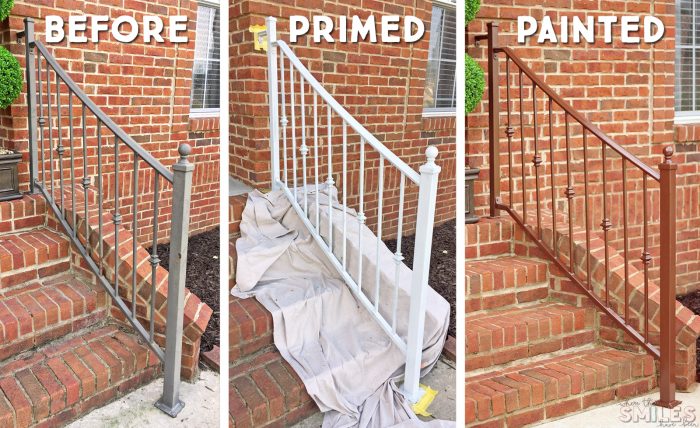 Check out my Project Gallery for all of my other home improvement projects, crafty creations, and freebies, like these! 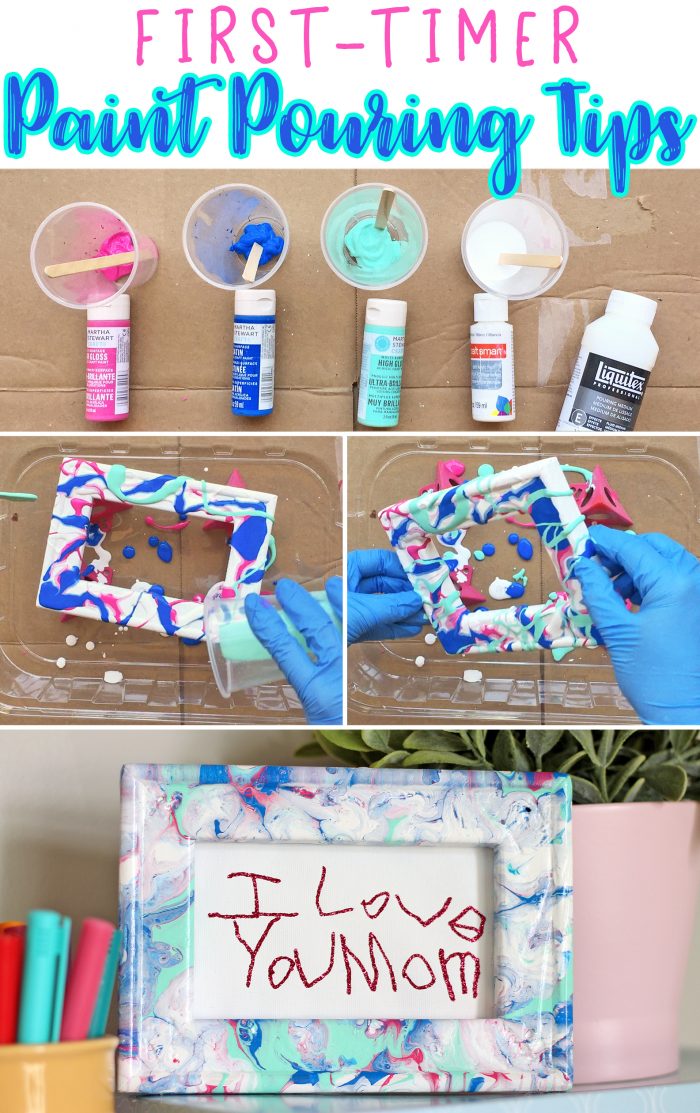 You really did a good job painting your railings. Subscribed <3

Thanks so much, Kevin!

The railings that I have at my home are a bit old and worn down. Now I do think it would be a good idea to do all the steps that you listed here and get them repainted. However, mine are pretty bad so I think I might take the replacement route.

We need to repaint our gate (it consists of a pedestrian gate, a double entry car gate and a side "false" gate which mirrors the pedestrian gate for symmetry) - quite a bit more prep and painting than your railings but without the concern of spraying a brick wall - if your project was larger would you have gone with spray pint instead I wonder?

Hi Jennifer! Yes, if my project was larger and I didn't have to worry about potentially messing up our brick, I definitely would have used the spray paint variety! It would have been much quicker. :)