If you’re going to a party, you have to be dressed in the correct attire, amiright?  A luau requires a Hawaiian shirt, a black-tie affair demands a tuxedo or gown, a costume party necessitates a costume, and for a birthday party, one must come dressed in such a manner that screams “I’m here to par-tay!”  Okay, maybe not that last one.

I do, however, strongly feel that if it’s a dinosaur birthday party, the dinosaurs themselves should be in their party threads, don’t you agree?  Well, for my son’s dino-mite first birthday party, I jazzed up some plastic toy dinosaurs with some paint, ribbon, and party signs, and they made the cutest and easiest DIY party decorations ever.  Seriously, they were so easy (and festive)!

My son, Rowan, turned one earlier this summer and we had a dinosaur-themed first birthday party for him.  I wrote a post about the festivities and you can read more about the shindig here, but I thought these dinos were so special that they deserved a post of their own.  The party wasn’t anything spectacular, but it was cozy and fun, which is all we intended.  I made most of the decorations myself, but my favorite pieces were these party dinos.  They are just so fun!

I first bought a pack of a dozen plastic toy dinosaurs that were about 5-7″ each, and then I found a few larger dinos in the One Spot at Target, so I snatched up a few of those as well.

Next, I bought some bright shades of Martha Stewart craft paint.  I also picked up some spools of thin ribbon that would eventually become trim for the dinos’ party wear.  Then, one evening while The Hubs was playing away on his Xbox and little man was bouncing away in his jumperoo, I got my paint on. 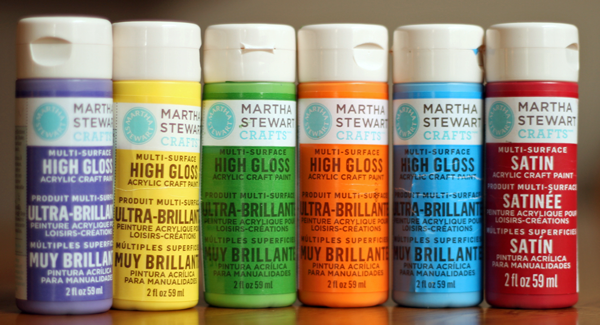 I used a small paint brush and painted a solid “outfit” on each dino, covering their torsos as well as making little sleeves over their upper arms and/or legs as well as their tails.  Each dino took 2-3 coats of paint.

I discovered that the smaller non-Target dinos had a waxy coating, and no matter how I tried, the orange paint did not want to coat them.  So that is why you will see that none of the smaller dinos are decked out in orange wear.  Oh well. 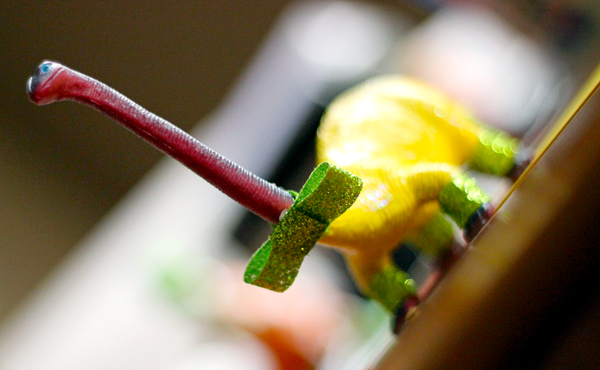 Once they were dry, I went back and spiced up their outfits a little more with polka dots, sparkles (Martha Stewart glitter craft paint or Sparkle Mod Podge), or contrasting-colored spikes or bellies. 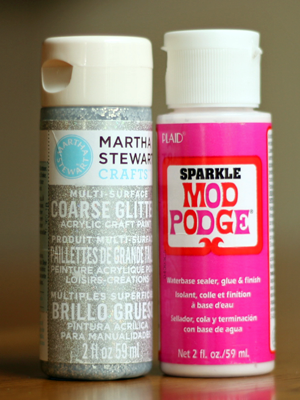 Next, I fired up my hot glue gun and started adding trim from the spools of ribbon I had purchased. For each dino, I trimmed their arms, legs, tails, & necks in ribbon, and then added a bow tie.  Because bow ties are fancy.  And adorable. 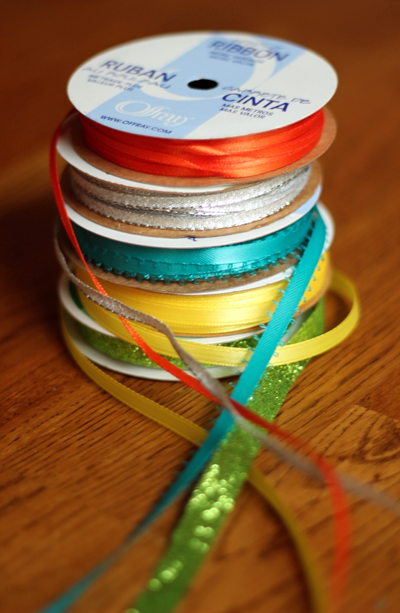 Now, having dinosaurs in clothes would probably be cute enough for most people, but I didn’t want to stop there.  I thought it would be even more fun to have each of them holding little party signs, almost like petite playful party picketers (like that alliteration?).  So, now that the dinos were (mostly) all dressed, it was time to create some party signs.

I had just gotten my Silhouette Cameo machine a couple weeks earlier and I was dying to try out the sketch pen feature, so I figured this was a good project to test it out.  I made little sayings that included:

I sketched out the sayings on white card stock with a silver Silhouette sketch pen (the same one I used for The Hub’s Transformers Father’s Day card) and then cut them out.  Next, in Silhouette Studio, I created an offset for each saying and cut those out in colored card stock.  These would serve as the background/border for each sign.  A little Elmer’s glue and they were nearly complete! 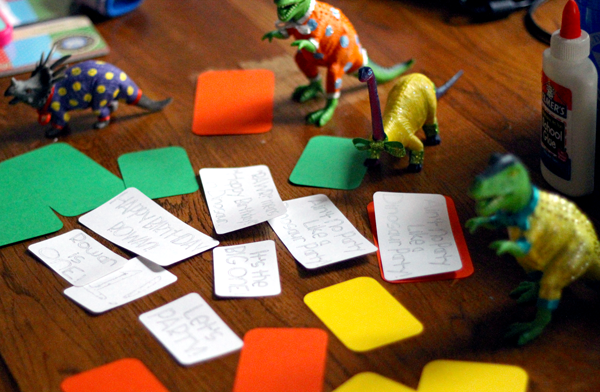 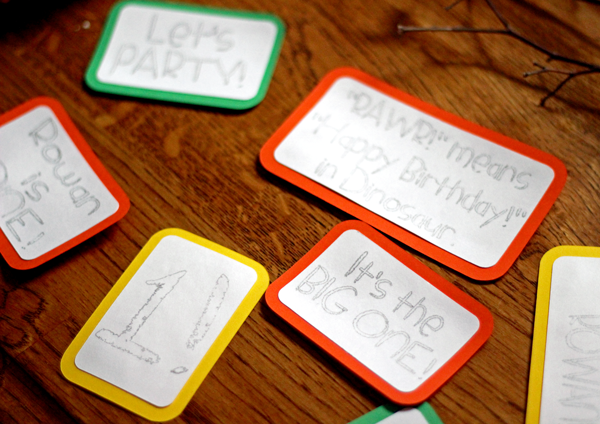 I first thought about using tooth picks for the dinos to hold the signs with, but then I sent The Hubs on a mission in the backyard for some small sticks to see if those looked better.  And they did. 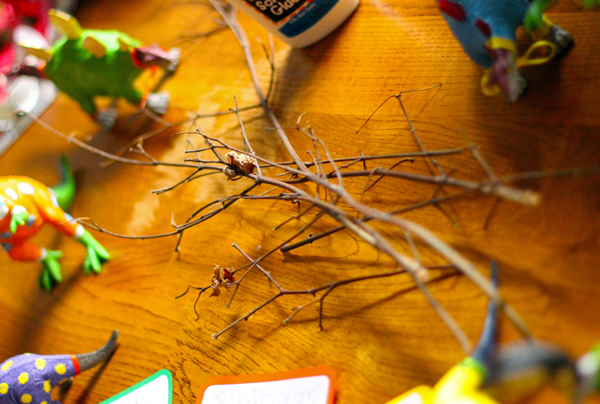 See how much cooler the sticks look compared to the boring tooth picks?  So much more believable for dinosaurs.  Dinos are rustic after all. 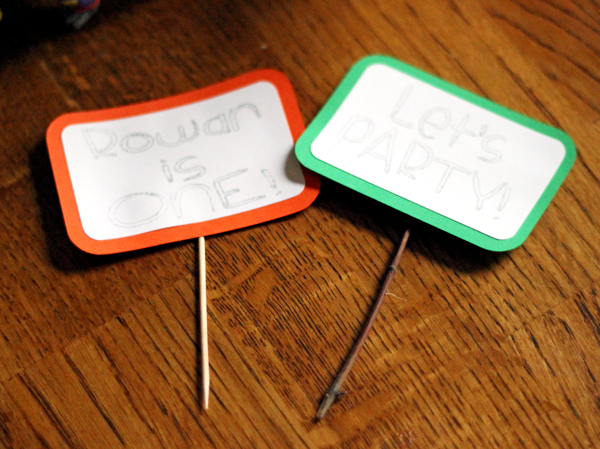 Now all that was left was….the party hats!  To make the micro-sized party hats, I searched Google for a template and imported it into Silhouette Studio. Then I shrunk it waaaaay down, duplicated it about a dozen times, then filled each one with a fun default pattern.  Then I fired up my Silhouette Cameo and did a print & cut with some white printer paper.

A little double-sided tape helped them stay coney and a mini pom pom on top completed the look!  A dab of hot glue on the head held the hat in place, and another in the hand (claw? paw?) held the sign steady.  And they were finally ready to party! 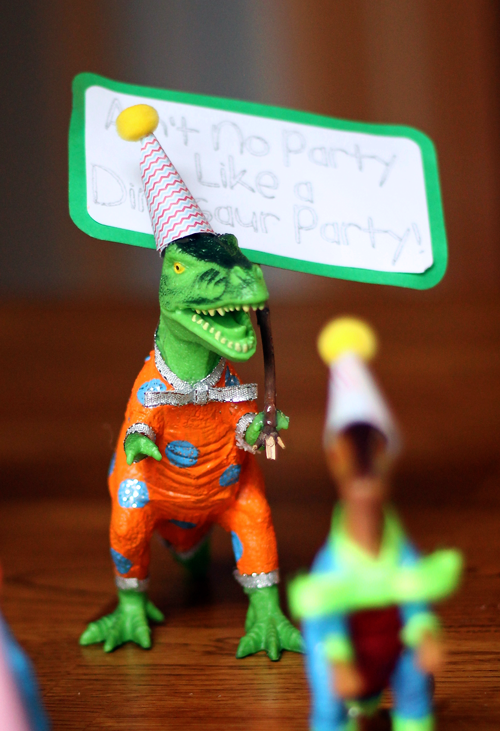 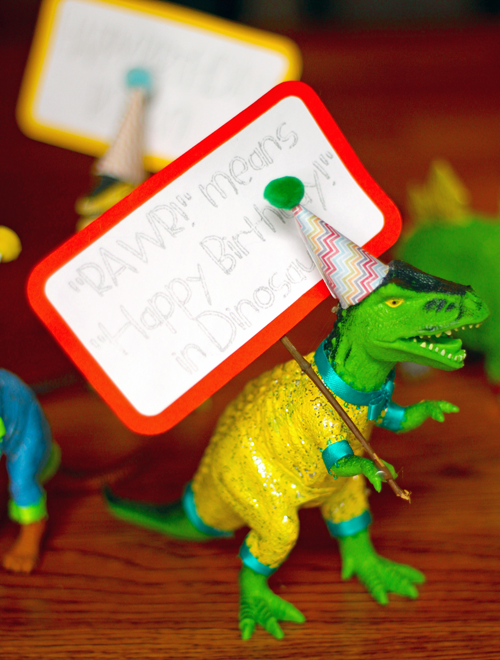 This little guy’s arms were just too small, so no sign for him. And this fella had a super tiny head, so he went sans party hat.  I think he’s my favorite though, even with no hat. 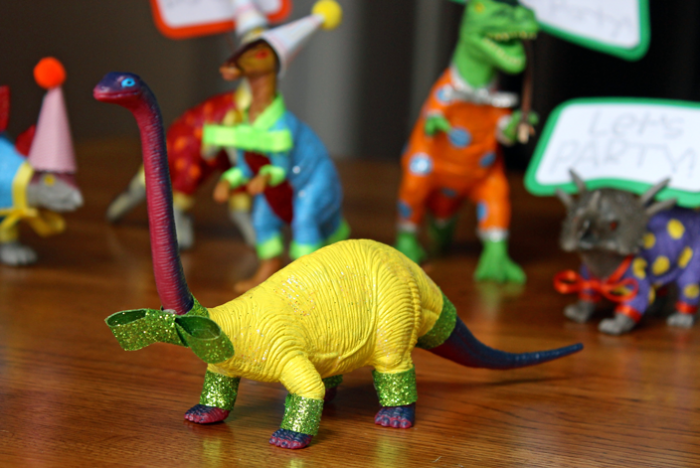 This one had a built-in sign holder thanks to his spikes! 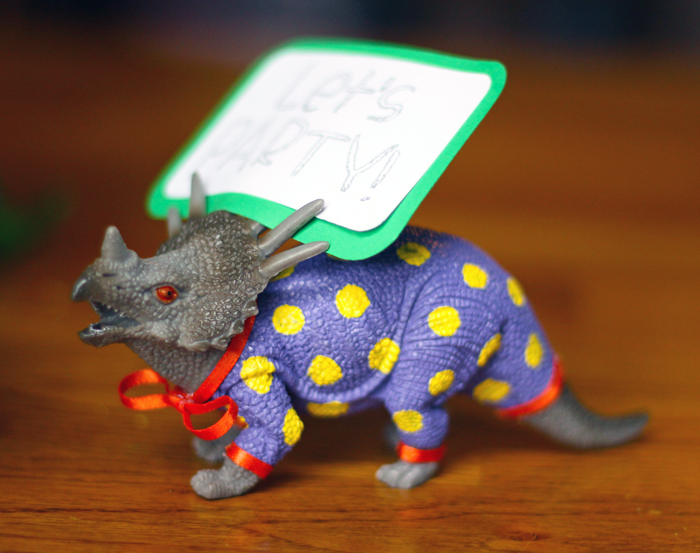 I painted some of the smaller ones in solid colors instead of party clothes just to spice things up.

These dinos made the cutest little additions to the food and dessert tables at Rowan’s party.  Some of them were even taken home by the kiddos as party favors! 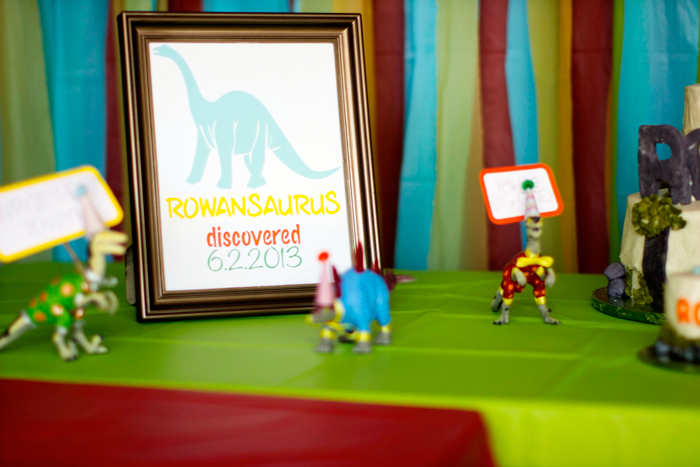 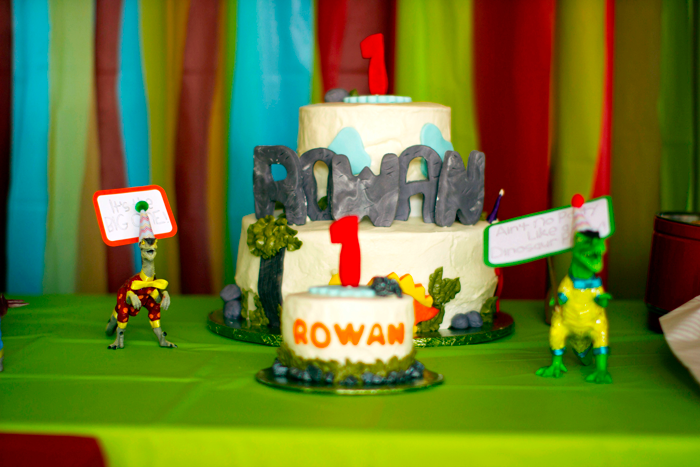 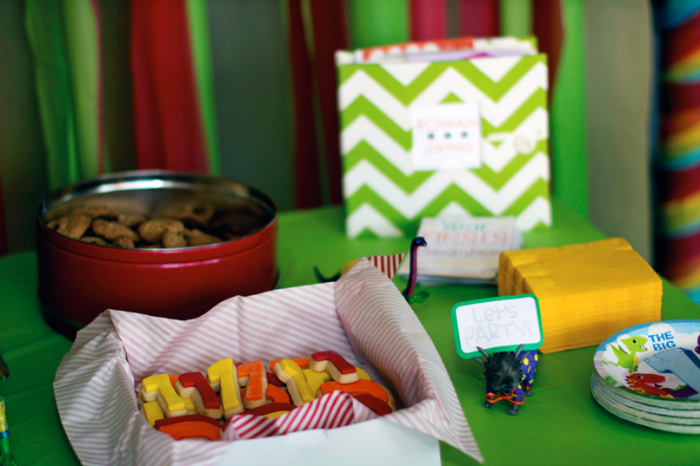 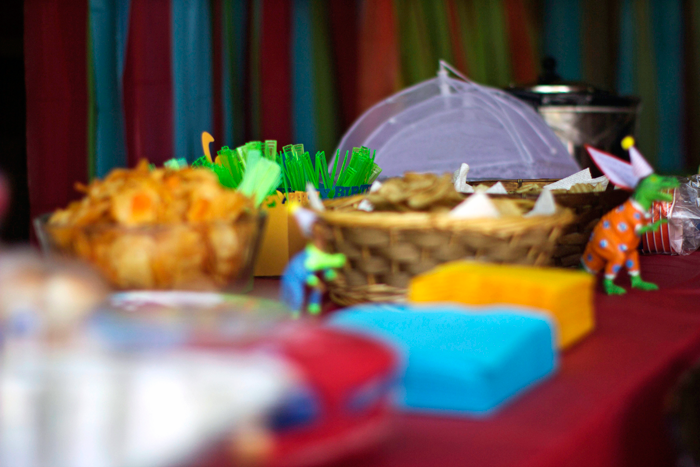 Party attire could easily be applied to other party themes as well, not just dinosaurs…you could paint duds on toy safari animals, action figures, Legos, horses, etc.  It’s such a quirky, fun, and unexpected addition….and they were also fun to create!

Jurassic Partiers | Do It Daily

Christine, this is just the cutest idea ever!! I love the outfits and accessories you added to these dinos! So fun and festive! I have been known to add party hats to a 2-ft tall copper elephant statue in our family room ;)

These guys are so so adorable! Thanks for sharing at our link it or lump it party!!

Thank you, Amy! I had fun making them. :) And thanks for hosting such a great party!

Oh my goodness, you are the coolest Mom EVER! Ha ha, these party dinos are so much fun...I can only imagine what your lil guy must think of them. I have spray painted the plastic dinosaurs before, but now you're giving me all these great ideas for dressing them up. Eek! Thanks for the inspiration and thanks for spilling this over at The Creative Spill this week. So wonderful!

Haha, thanks lady! My son is more impressed with their talents as teethers than their cool new duds. :) But I sure like them! Thanks for hosting The Creative Spill....I love that you host such a fun and social meet-up/sharing session!

[…] I loved these party dinosaurs so much, I wrote a whole post about them, and you can check it out here! […]