All spring, my Pinterest feed has been filled with the cutest little succulent planters.  They’re all so stinkin’ adorable, and one was quickly added to my ever-growing project list.  I don’t have anything close to a green thumb, but I think even *I* could keep these little guys alive…..I mean, how much more low maintenance can you get than only watering once a month??

When my son received a new toy several months back, I was not only happy that he for once actually liked the toy more than the packaging it came in (rarely happens with a toddler), BUT the toy’s box was what caught mommy’s eye….it would make the perfect little container for my first succulent garden!

How to Make an Upcycled Faux Copper Succulent Planter

Now I am by no means Miss Horticulture, and I have been known to kill a plant or two (or dozen).  Because of that, I spent some time researching the interwebs on how to plant and grow succulents, and I was pleasantly surprised to learn that it’s actually not that difficult.  Most don’t need lots of direct sunlight (if any), you only need to water them about once a month, and they can be planted in just about anything….sounds ideal to me!

You can use basically anything as a container for a succulent garden.  I’ve seen people use all kinds of unusual items: books, tires, teacups, even plastic toy animals!  Since succulents don’t have deep roots, shallow containers work especially well.  Here’s what I used to complete this project:

A few months ago, my son received his monthly Citrus Lane box, and in it was a set of wooden magnets.  He was all about the magnets since he’s *obsessed* with all things transportation (“Caaaahs” (cars), “Ahh Ahhs” (airplanes), and “Ha Has” (helicopters) just set his little world on fire)…..mommy here, however, was in love with the box!

It’s a very sturdy wooden box that’s a couple inches deep, and I just couldn’t pitch it….I knew one day I would think of the perfect use for it.  It didn’t take long for me to decide to use it as my first succulent planter….it’s just the perfect size to sit out on our patio table, which is in desperate need of a little color and sprucing up. 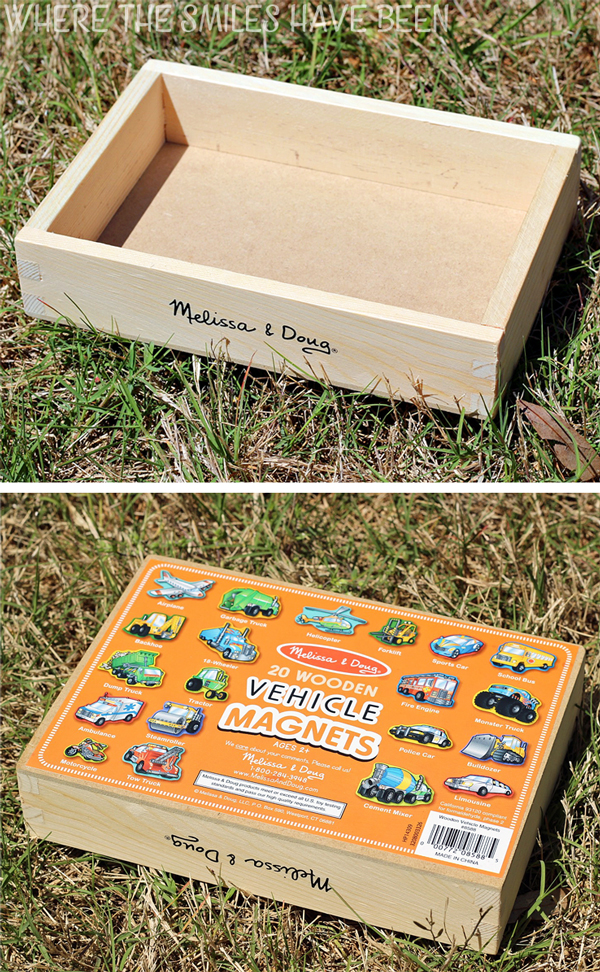 After researching all things succulents on the interwebs, I learned that since my box is really shallow, I needed to add a few drainage holes to the bottom.  If you’re using a deeper container, you can get by without these by having a nice hefty layer of pebbles at the bottom to allow for drainage.

I therefore utilized my husband’s handyman skills again and had him drill a few holes in the bottom of the box.  He already had his drill unpacked while we were finishing up my son’s pallet bookshelves, so I got ambitious and decided to work on two projects at once…..I know, look at me gettin’ all fancy! 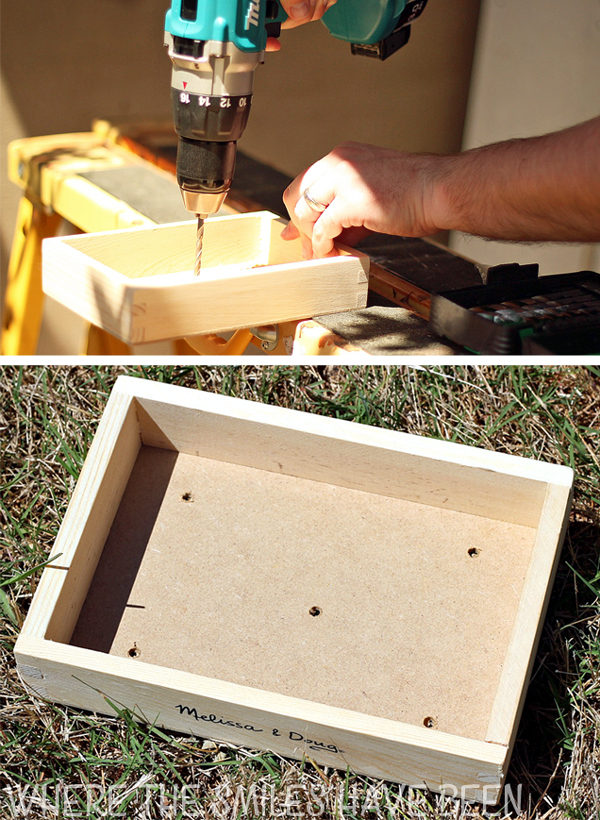 Turning My Wooden Box into an Aged Copper Box

Now it was time to beautify this box!  You may recall a post I shared several months ago where I transformed a cheap craft store clearance find into a faux-aged copper letter.  Well, that project was so easy and had such amazing results (seriously, check it out!), I decided to utilize the same process here….it also doesn’t hurt that the paint and patina spray seem to be lasting forever.

So I busted out my jar of copper paint and got to work! 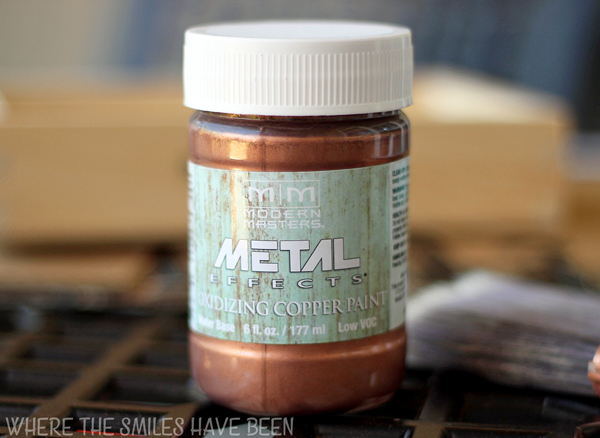 I first applied one coat of the paint over the entire surface of the box, minus the bottom, then let it dry completely. 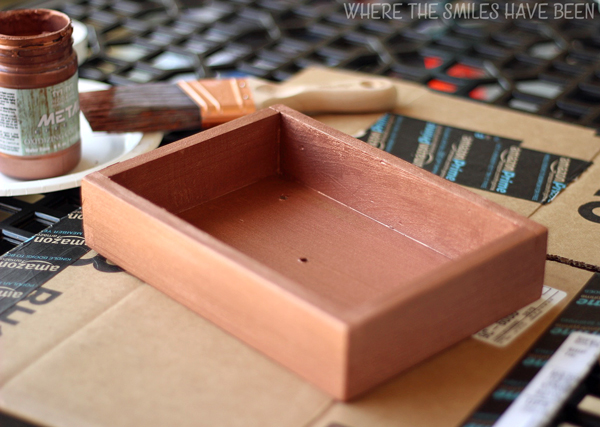 Here’s a handy tip for ya: If you’re doing a painting project and need more than one coat, instead of cleaning off your brush in between each coat, just pop it in a plastic bag!  The brush will be ready for you when it’s time to start painting again.  So instead of washing that extra paint down the drain or forking over moolah for a fancy shmancy paintbrush cover, save your time and money….a plastic baggie is all you need! 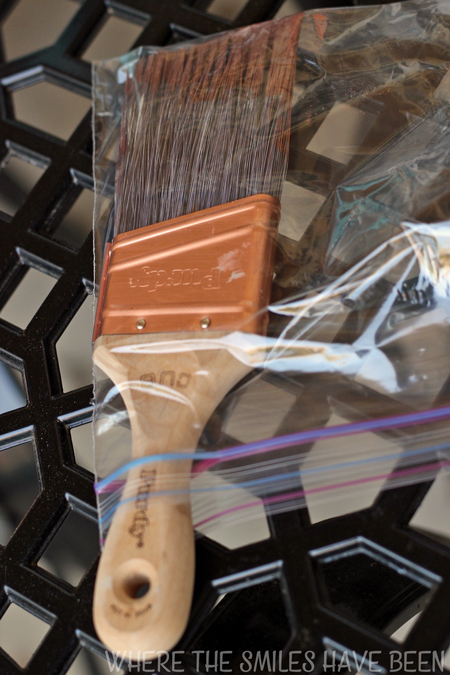 Once that first coat was dry, I flipped the box over and added a coat of paint to the bottom, then another once the first had dried, just to make sure the print on the bottom was fully covered. 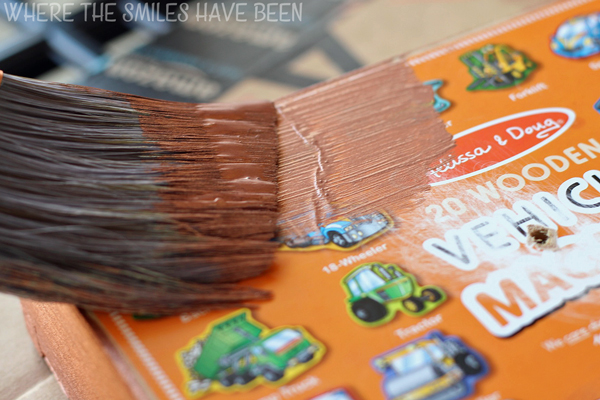 Starting to look nice and coppery, no? 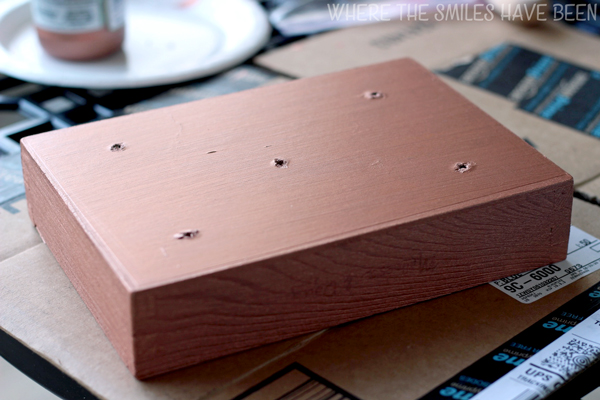 The patina spray that results in the aged, bluish green look needs to be applied to WET paint, so once the bottom of the box had dried completely, I added another coat of paint to the rest of the box.

While everything was still wet, I started spritzing away! 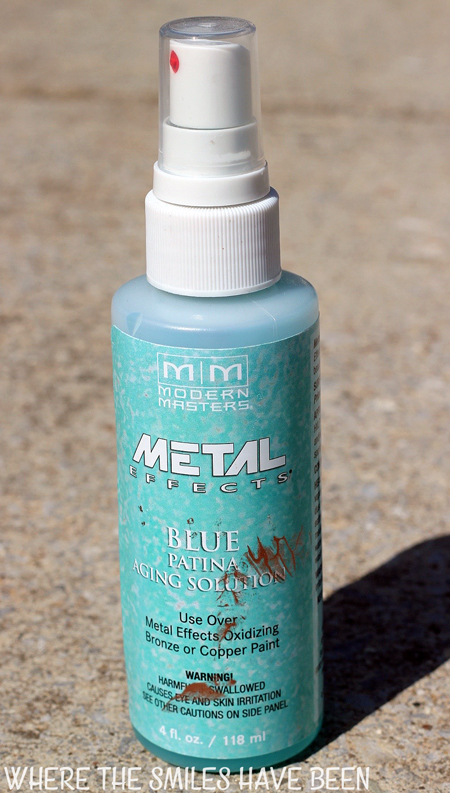 You can add as much or as little patina as you’d like, and it starts working pretty quickly.  Below, you can see the process unfolding…. 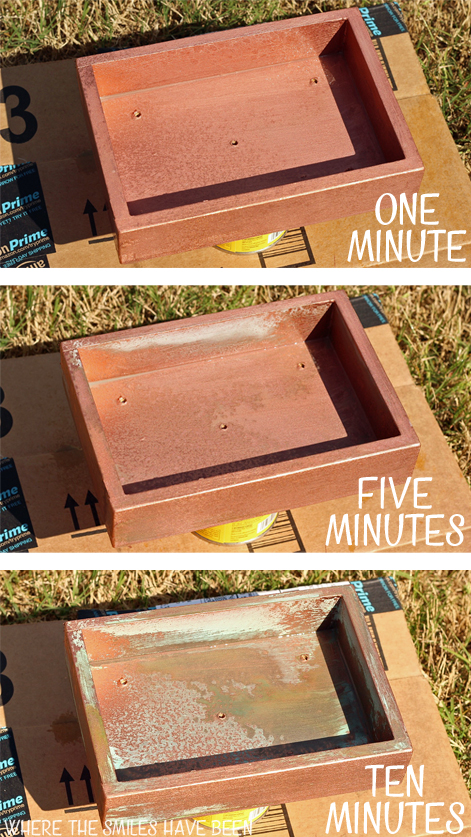 I didn’t want this box to look too aged (I just love that shimmery copper), so a light spritzing was all it received.  After about 45 minutes or so, it was fully dry and ready to be transformed into a planter! 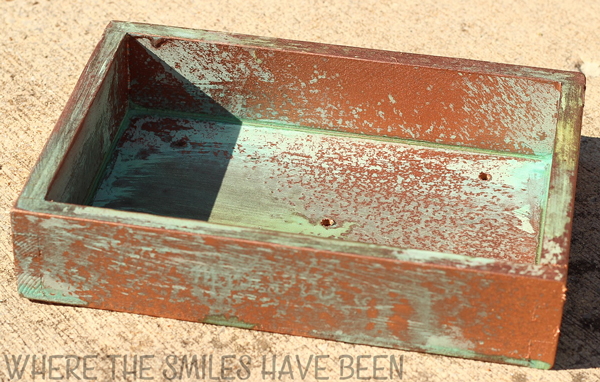 Acquiring the Plants and Potting Soil

We then headed down to Home Depot for our plants and soil.  Our local store must have been in between shipments because they had slim pickings with their succulent selection….they had been nearly wiped clean from just a few weeks earlier!  Just my luck, I tell ya….

An associate informed us that he didn’t know when their next shipment would be, so I decided to just go ahead and grab a few of the ones they had.  I also grabbed a bag of potting mix that is designed specifically for cacti and succulents.  You could also mix some sand in with regular potting soil if you didn’t want to get this special desert kind.

{FUN FACT: All cacti are succulents, but not all succulents are cacti.  BOOM.  Blow your kids’ minds with that over dinner tonight.} 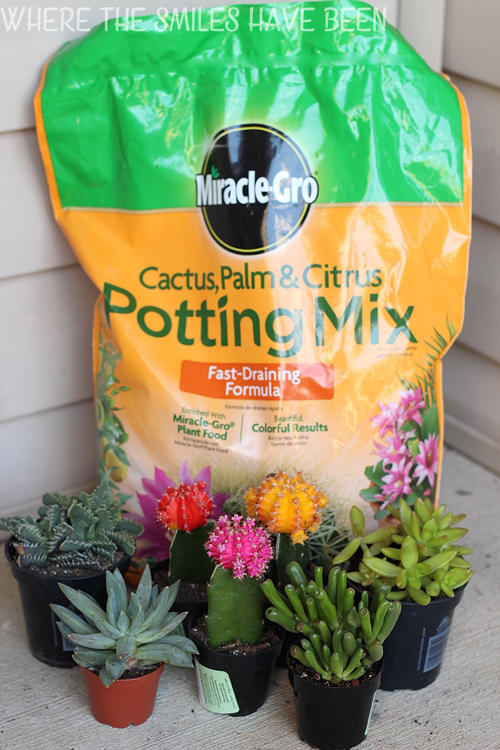 In case you’re curious, here are the types of succulents I used in this planter, according to the names on their containers: 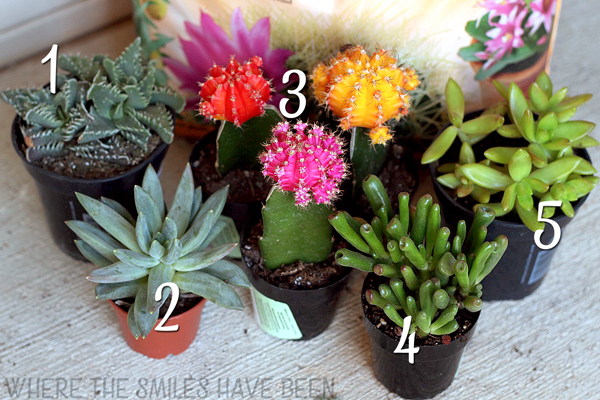 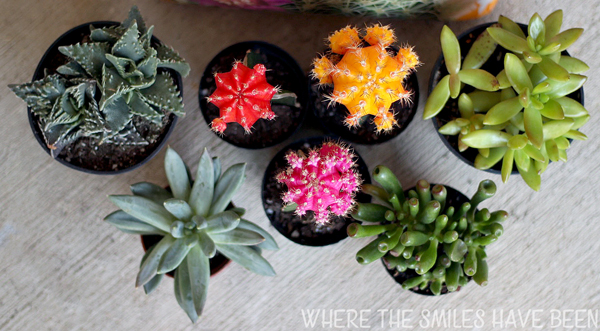 Even though I had a very shallow container and added some drainage holes, I still went ahead and included a thin layer of pebbles at the very bottom.  This was mainly to help keep the drainage holes from being blocked up by the soil, or to keep the soil from draining out altogether….it may not have been necessary, but I’m a worry wart, so I went ahead and threw some in.

You can certainly buy a bag of rocks, but I just scooped up some pebbles from the side of our street…shhhh, don’t tell my HOA! 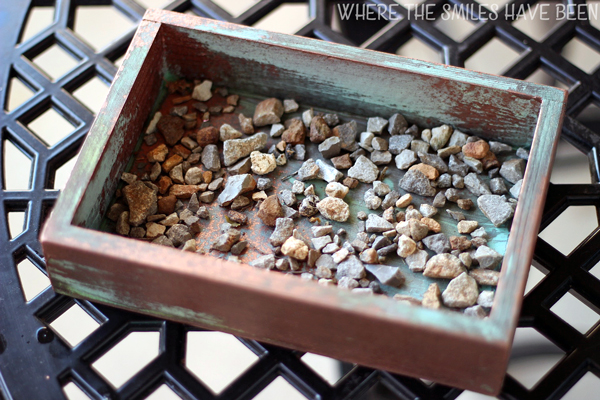 Then I tore open the bag of potting mix and filled the container (mostly) all the way with soil.  And yes, I totally wore gloves during this.  Because dirt is gross. 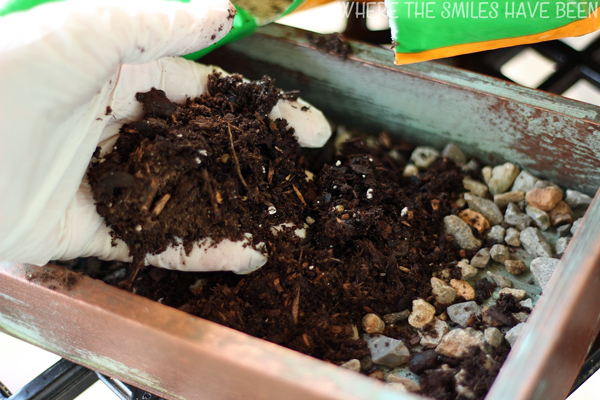 Now it was planting time!  Home Depot must not have given these bad boys a watering for quite some time because all of them easily popped right out of their containers and their soil was dry as a bone….their soil just crumbled away in my hands.

Before sticking each into their new homes, I squeezed and broke up their soil pods a little to expose their roots and allow them to become better integrated with the new soil….at least that’s what the internet told me to do, so that’s what I did. 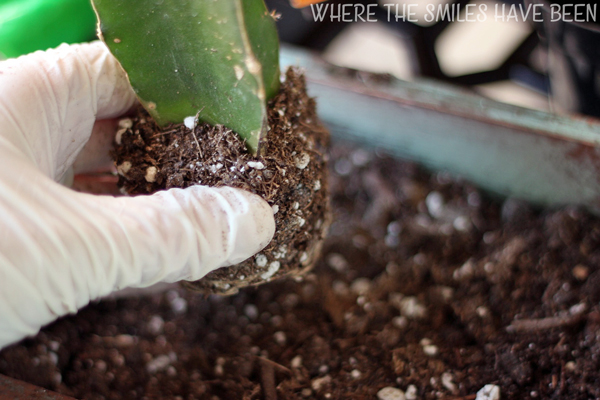 Something that I wasn’t expecting, but ended up being a pleasant surprise, was that three of my succulents actually had several different plants in their containers….I assumed that since I had seven plant containers, that meant I had seven plants.  Silly me!  The three moon cacti and the short, pale green sedum were single plants, but the rest actually broke apart into their tiny selves once I popped them out.  This allowed me to space them out around the container and added some additional variety….like I said, pleasant surprise!

Once all the plants were in place, I added more potting soil to keep everything nice and snug in the container.  I decided, however, to not add any decorative stones to the top like most people apparently do….I initially bought a bag of black ones, but they would have been too much for this planter, and since it won’t be exposed to rain thanks to our patio being covered, I don’t have to worry about any soil washing away.

And here it is!  Not bad for a first-time succulent planter who doesn’t have a green thumb, ehh?  And no one would ever know that cute little box is faux-aged copper, or that it initially housed toy magnets.

The cool thing too is that since this planter is outside, the copper paint will continue to show more of that aged patina look thanks to being (somewhat) exposed to the elements, so over time, it will become more of the pretty greenish blue. 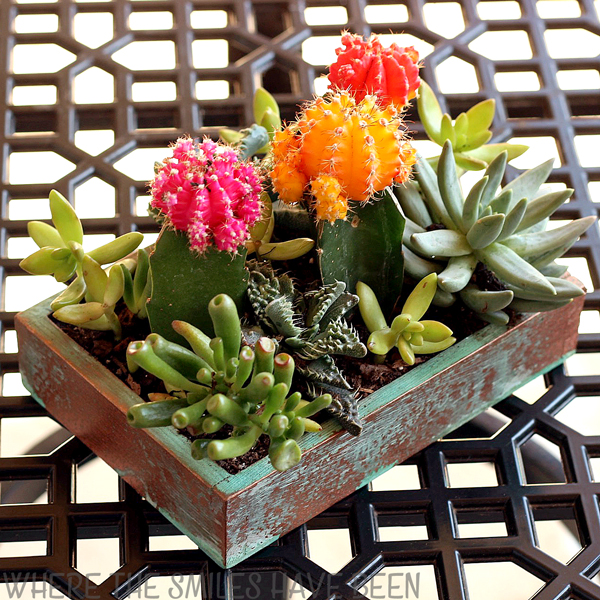 This little planter adds the perfect amount of color to our back patio, and I know it’s something that even *I* can keep alive.  Gotta love something you only need to feed once a month….ahhhhh, if only toddlers were that easy…. ;) 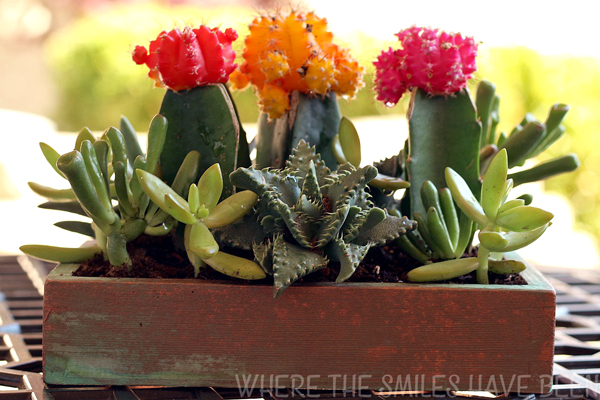 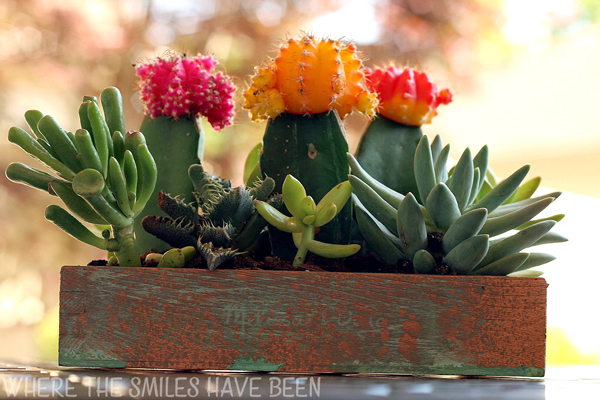 I waited a few days before watering (as instructed) so the roots could get used to their new environment.  The plants will continue to grow and fill out, too, and I’ve even planted some of the buds that fell off during planting….we’ll see if they start growing too, then it will be a succulent bonanza! 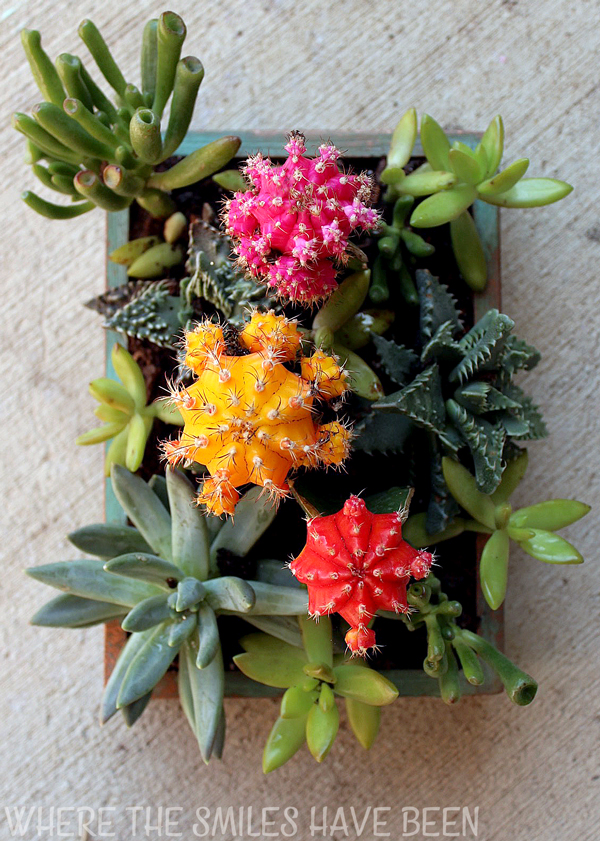 I’ve since made a second faux aged copper succulent planter, this one as a housewarming gift! 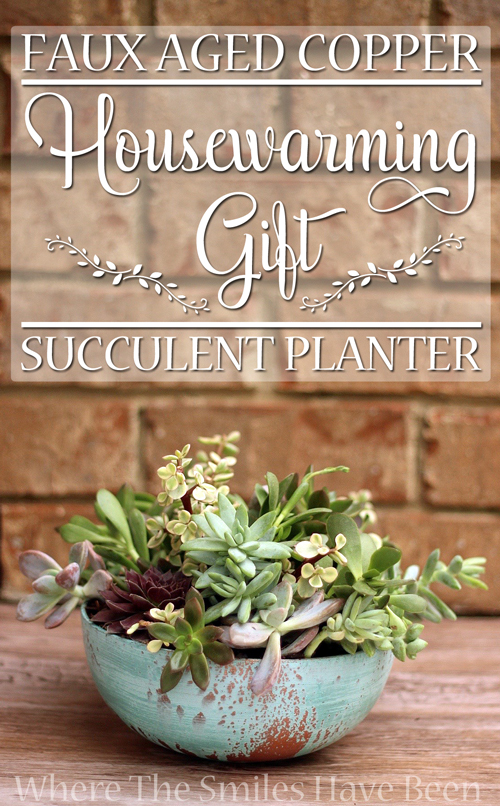 10 Easy Ways To Display Succulents Around Your Home

[…] Where the Smiles Have Been – Upcycled Faux Copper Succulent  […]

[…] How about a faux zinc planter from Where The Smiles Have Been. […]

Wow! I never knew the patina spray existed! And I LOVE that look but it takes forever greating it with vinegar and salt. Even then the results are mixed. Grabbing my Michael's coupon and heading to the store! Great post!

I'm so glad you enjoyed this, Audra! I've never tried the vinegar/salt method before, but I guess I don't have to now that I know this paint and spray work so well! :)

Oh I can't even express how much I love this! We have been itching to start gardening, but I think we need to start small and this looks like a great way to do it - succulents don't need too much water - the color is beautiful of the plants you chose and the pictures of the progression of the aged copper box make me want to run out and buy that right now! Pinning for my gardening aspirations.... and then going to show my daughter so we have something else to add to our Summer Bucket List ; )

Thanks Erlene! That little box was just too cute to throw away, and it was the perfect size for a little planter. Good luck with your succulents! :)