So it’s almost Halloween (in case you weren’t aware) and I have a two-year-old son (also in case this is news to you).  This year will be his first time really partaking in the All Hallow’s Eve festivities including the best part….trick-or-treating!

Last year, Rowan dressed up as the cutest little Sons of Anarchy biker baby you ever did see, and we were all so excited for him to trick-or-treat and get lots of candy for himself (I even made him a hard-core pumpkin pail!).  However, our fun was canceled at the last minute thanks to a….ummmm….diaper explosion of sorts that ruined said costume and left the poor boy feeling miserable (teething poops are the worst).

Well, this year our fingers are crossed for a TRUE trick-or-treating experience!  Momma here wants lots of pictures (and candy, but mainly pictures….and Reese’s cups….but only after photos are taken).

So, in honor of this special occasion, I decided to whip up a tote bag that is just perfect for trick-or-treating for years to come since it’s not costume-specific….it’s also super cute, personalized, and glows in the dark!

Oh, and be sure to scroll all the way down to enter a great giveaway for an Expressions Vinyl gift card!  Woot! :) 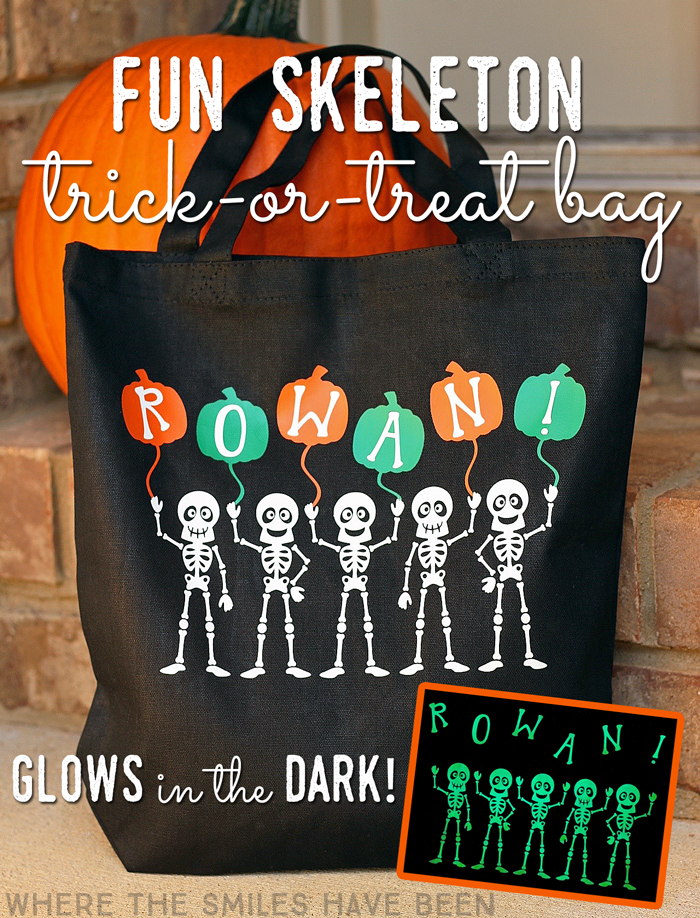 [This post contains affiliate links, and many thanks to the awesome folks at Expressions Vinyl for sponsoring today’s fun!]

My design was created with two different daily freebies from Daily Art Hub (see, there’s a reason why I included them in my huge list of awesome FREE digital resources!): their funny skeleton set and their cute jack-o-lantern set.  I simplified the pumpkins to make them work as balloons and removed the silly faces in order to insert my son’s name….stay tuned next week for another project that I used these fellas in when I added them (faces included) onto a shirt for my son to wear to the pumpkin patch!

When I was creating this design, I at first was only planning on using the skeletons and had Rowan’s name across the bottom, just in text.  But then I started thinking that since the boney guys have their hands up in the air like that, it would be fun to get them in on the action a little more….you know, instead of just waving, have them hold something….like balloons!  And even better if the balloons were pumpkin-shaped and spelled out Rowan’s name.  Very Halloweeny, indeed.

I then hit up my favorite site to preview all my fonts at once and found one that looked kinda like bones (to me, at least) called KG Melonheadz.

Also, a really cool part about this design is that the skeletons and letters will look like regular white vinyl in the light….then start to glow a cool green color when it’s dark out!  Yep, this glow-in-the-dark HTV is pretty cool (just wait for the photos below!). 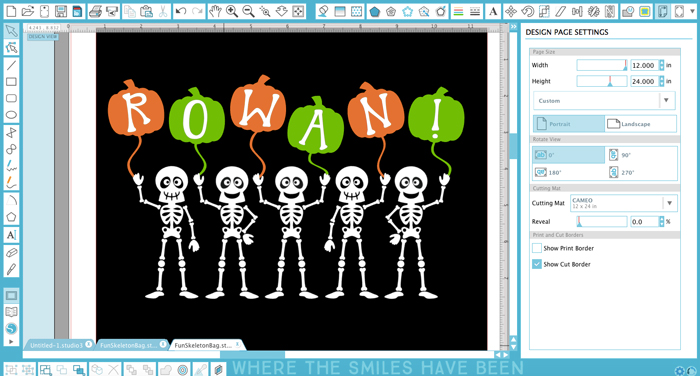 Cutting Out the HTV

Once my design was complete, I got to cutting out each of the colors with my Silhouette Cameo, one at a time.

As you will see, I cut out the letters in white and also out of the colored pumpkin balloons.  The ones on the balloons, however, were slightly smaller than the white ones thanks to a tiny internal offset.  I did this intentionally for two reasons: 1) to allow the white letters to adhere to the bag itself as opposed to only the colored HTV but still have a little overlap thanks to the offset, and 2) to allow for easier placement of the letters.

The offset and cutting out of the balloons were probably not necessary though, and I like to add a thousand extra steps to every project for some reason, but that’s what I did and it worked just fine.

I usually use the default Heat Transfer Material: Smooth settings when cutting HTV, however, for this project I bumped the speed waaaaay down….there were lots of teeny tiny intricate details here!

Thankfully (and surprisingly) I actually remembered to flip my design horizontally before making any cuts too…I love when that happens. 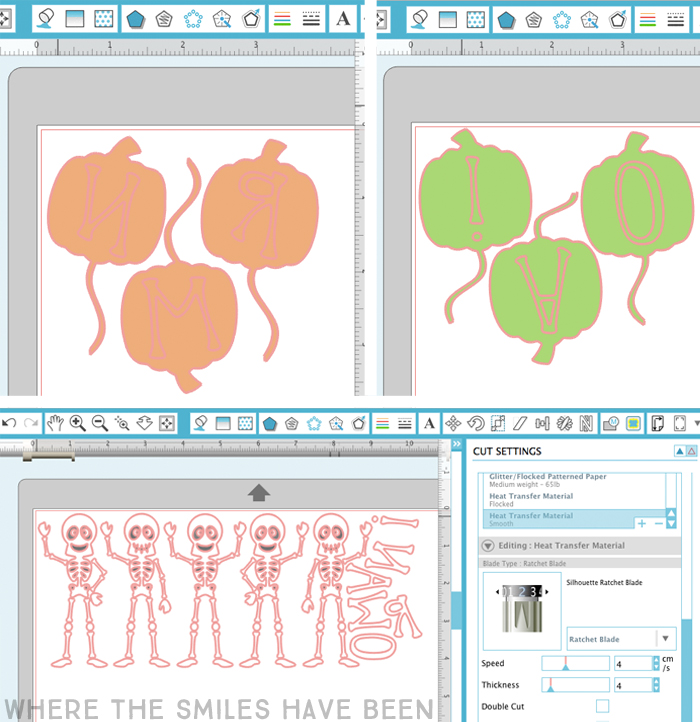 One sheet of HTV at a time was placed on my cutting mat (shiny side down) and loaded into my Silhouette Cameo, then the cuts were made.

I trimmed everything up and weeded (or removed) the excess vinyl….and man, those little skeletons were nearly the death of me!  (Ha!  Did you see what I did there?) ;) 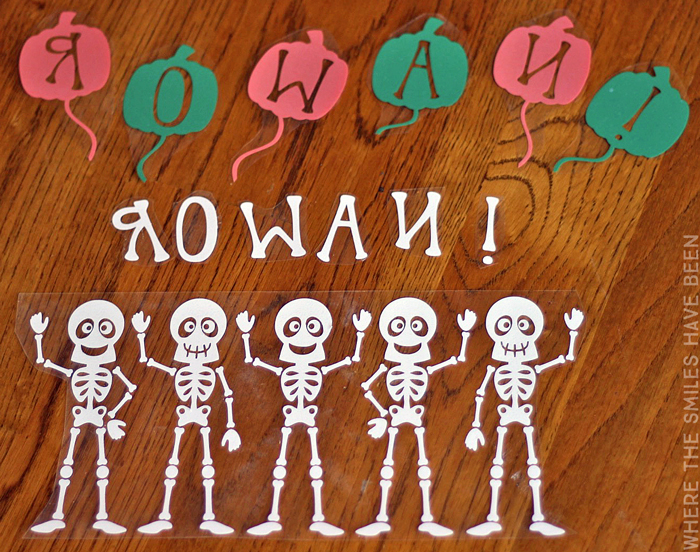 My HTV pieces were now ready to go, so I got to prepping my canvas tote.  This black bag came in the same pack as the white one I used for my Farmers’ Market ‘Eat Local’ bag, so it was nice to be able to use something I already had on hand.

Since I’m lazy and HATE dragging out our big clunky ironing board from the laundry room, I instead like to get my craft on at our dining room table….much to my husband’s chagrin.

Normally, I use a flattened cardboard box to protect the table while applying HTV, but we were out of them on this day so a cookie sheet made the perfect substitute….and I might actually use it from here on out!

I gave the bag some quick passes with my hot iron to remove any (well, most of the) wrinkles and create a nice, smooth surface for the HTV to adhere to. 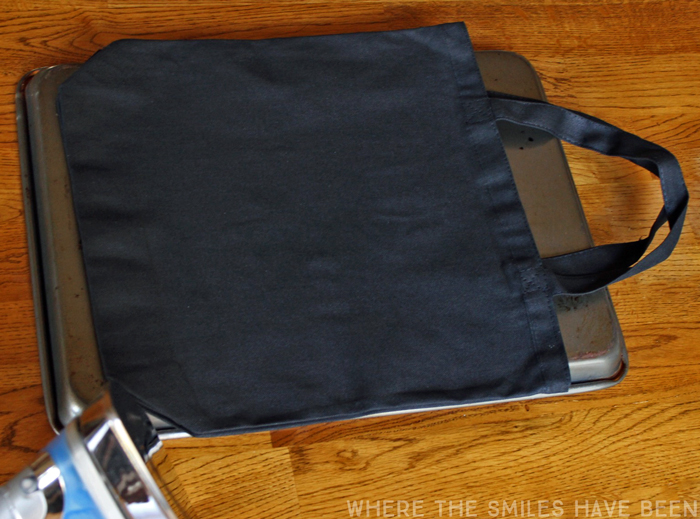 To keep the spacing and placement of the balloons correct (and once again, because I’m lazy), I applied the skeletons and balloons all at the same time.

I made sure, though, to trim away all of the excess clear backing from the bottom of the balloons’ strings so there wouldn’t be any extra underneath the skeletons’ hands….that would not allow the hands to adhere to the bag and be very bad come time to remove the backings.  No overlap = good. 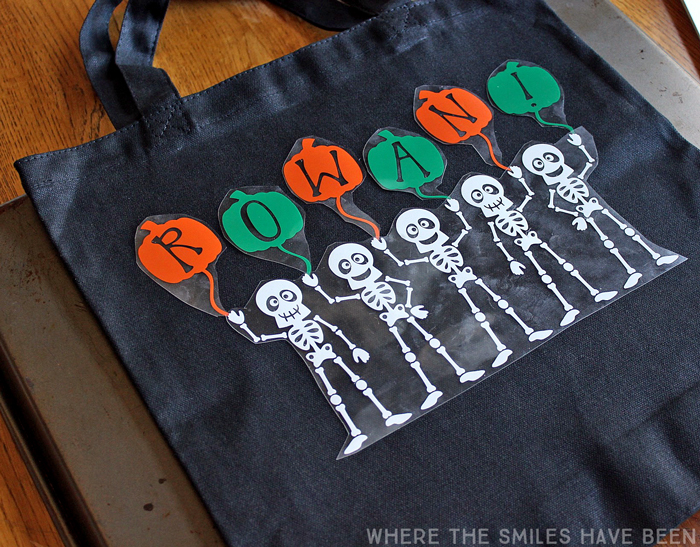 I then placed a sheet of multi-use paper on top of the HTV and got to ironing!  My iron was preheated to the Cotton setting and all it took was a few passes over the surface, applying firm and even pressure for 5-10 seconds.

I would periodically check to see how the HTV was sticking to the bag….if any started to come up as I pulled away the clear backing, I simply laid everything back in place and got to ironing again. 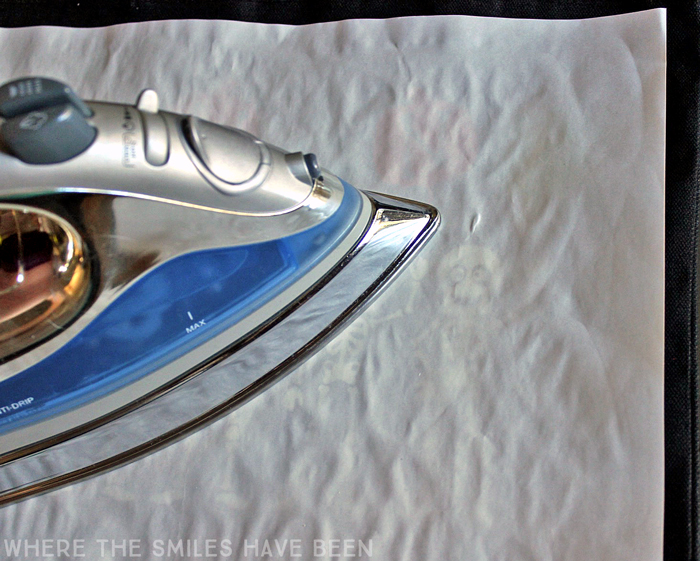 When there was no more peeling up of the HTV, all of the clear backings were removed.

Now it was time to add the white glow-in-the-dark letters to the balloons, so I placed them into position and repeated the same steps described above to adhere them….and with that, Rowan’s fun little bag for trick-or-treating was complete! 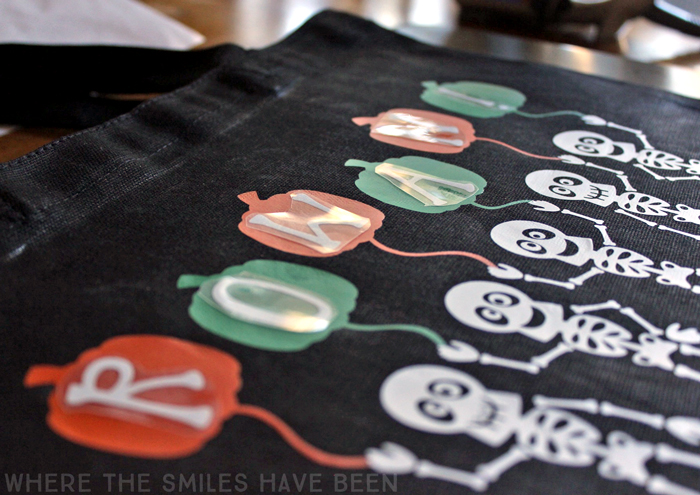 The Completed Fun Skeleton Trick-or-Treat Bag that GLOWS in the DARK!

How stinkin’ cute is this?!?  I mean, seriously.  Those skeletons are so fun, and the pumpkin balloons are so unique, and you know how I love me some personalized goodies! 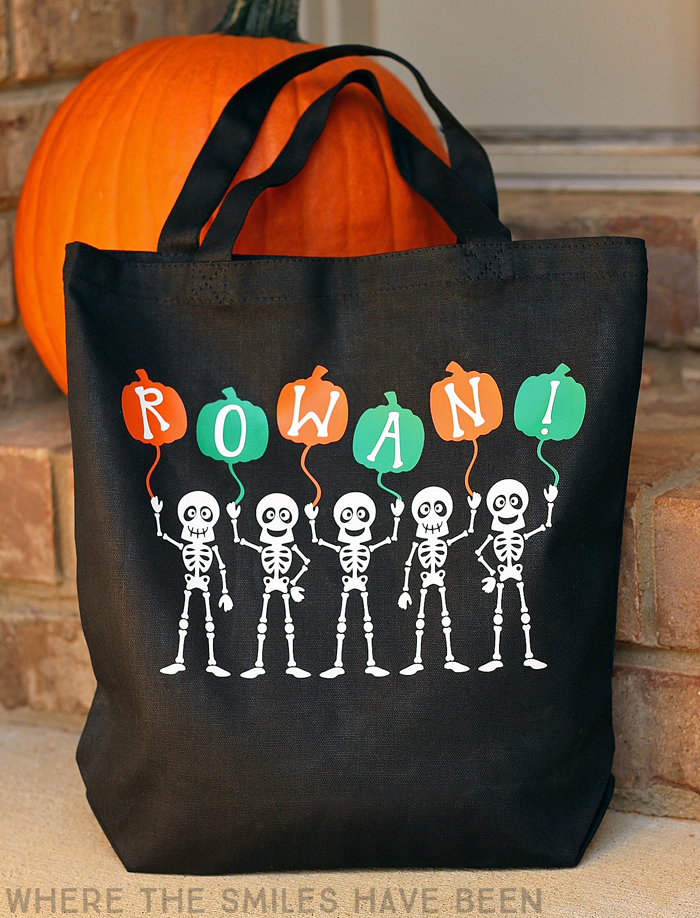 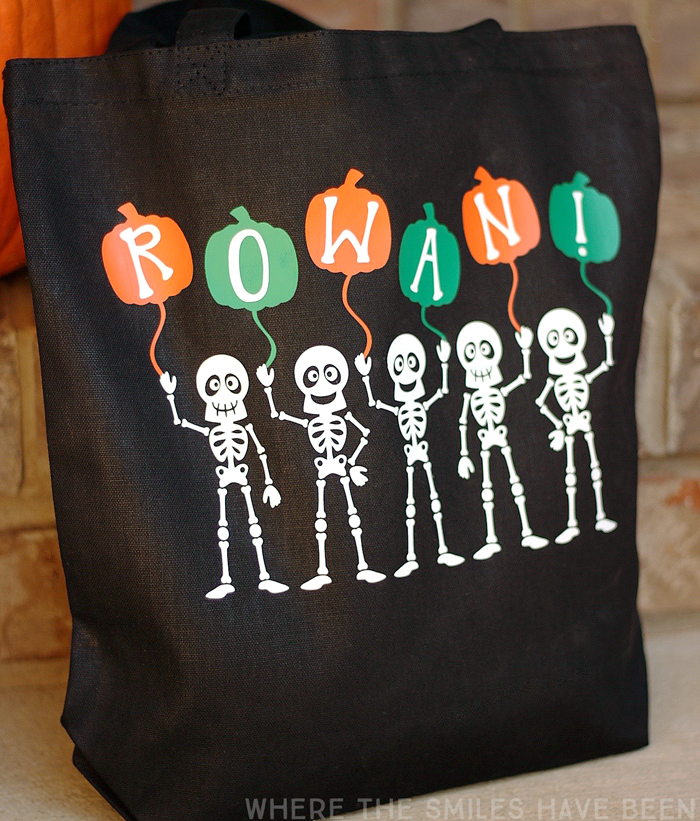 Oh, and let’s not forget about this cool GLOW-IN-THE-DARK HTV!  I have to say I am super impressed by how much glowing there is, too.  It looks and feels like regular white HTV, then once in the dark, BAM!  A cool bright green hits you from out of nowhere!  I think this is perfect for Halloween, and especially trick-or-treating. :) 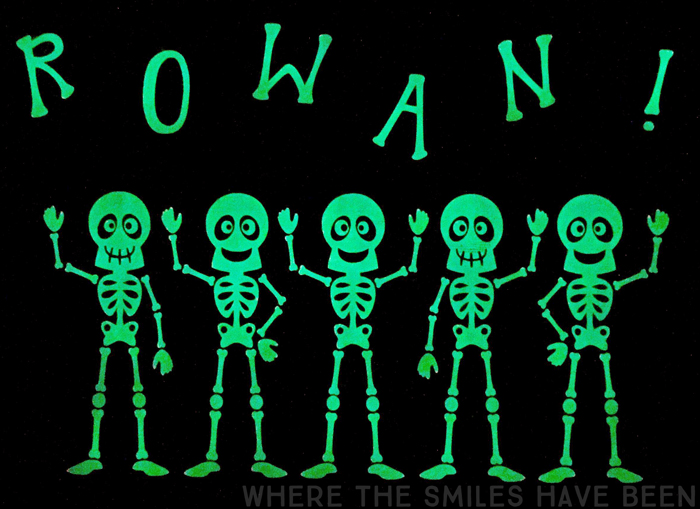 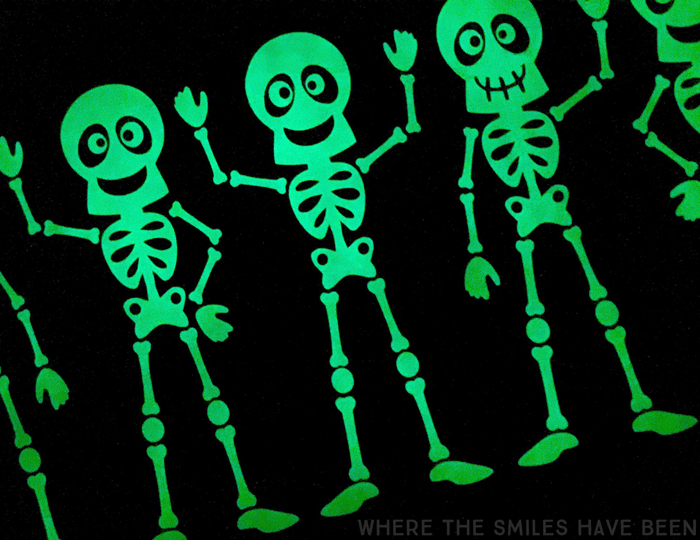 The lovely folks over at Expressions Vinyl would like to help YOU get into the Halloween spirit (or just the crafting spirit in general, which never ends!) and are offering up this great giveaway for a $50 gift card!  Just enter in the widget below for your chance to win!  Good luck!

Thanks so much for stopping by, and have a very Happy Halloween! :)

Super cute! Pinned and tweet. Thank you for being a part of our party. I hope to see you on Monday at 7 pm, because we love to party with you! Happy Halloween~Lou Lou Girls

[…] Fun Skeleton Trick or Treat Bag ~Where the Smiles Have Been […]

I love all of your Silhouette creations. You're so creative :-)

Awww, thanks so much Erlene! It's a really fun tool to play with and you can do so many things with it! :)

This is so super cute, Christine!! And I love that it has a glow-in-the-dark feature - it's so perfect for trick-or-treating!

Thanks a bunch, Emily! That glow-in-the-dark HTV was a lot of fun to play with, and it was perfect timing too with Halloween right around the corner! :)

Skeleton shirt with glow in the dark vinyl (and GIVEAWAY!) - A girl and a glue gun