My son is turning two tomorrow and I cannot. believe. it.  HOW IS HE TWO???  It feels like he should be maaaaaaybe six-months-old now.  Seriously.  Time just keeps moving by faster and faster.  Super sad mommy, over here.

Anyway… Last year we had a big dinosaur celebration for his first birthday, but this year we kept everything low-key.  Instead of a birthday bash, we celebrated with family during our trip back to KY over Memorial Day weekend.  Even though we didn’t have an official party for Rowan, I still wanted to do something special, so I made him a custom birthday shirt!

This project was a bit of an experiment for me too (I like those!).  I’d only ever used heat transfer vinyl (HTV) once before when I made my ‘Eat Local’ farmers’ market tote bag, so this was still new territory for me.  Plus, I’d be using multiple colors of HTV (one of which was also flocked as opposed to the smooth variety) for the first time, AND I’d be cutting fabric for the first time and using interfacing with it, AND I’d be layering the HTV on the fabric appliqué.  Oh, AND my design would have elements on the front, back, and one sleeve of the shirt.  That’s a lot of firsts for one project!

{Note: This post will just go over the basics of how I made this shirt as I’m planning on sharing more detailed tutorials for all the individual steps.  Otherwise, this would be never-ending!}

I’d been wanting to give cutting fabric a try with my Silhouette for a while now, and I thought this would be the perfect opportunity to create a cute little applique.  I suppose I could have just used more of the printable HTV that I had left over from Rowan’s Valentine’s Day robot shirt, but where’s the fun in that?? 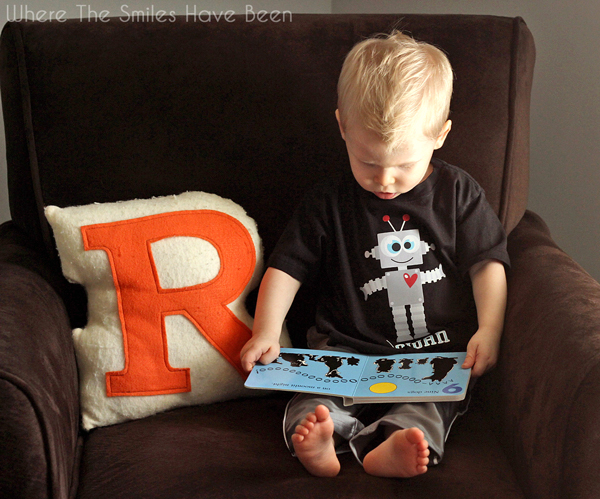 I mean, I don’t have an embroidery machine and I can’t sew (although it’s on my bucket list!), but my lack of skillz wouldn’t be a problem here…..I do have an amazing Silhouette Cameo, so I could just use that and some interfacing to keep the fabric attached to the shirt, and HTV would be a nice replacement for a stitched outline.  Perfect!

So I snatched up a shirt from Old Navy while they were on sale and then readied the rest of my supplies.  I found some colorful, modern fabric from JoAnn that luckily matched Rowan’s shirt as well as some HTV that I already had….I just love it when the crafting stars align like that.

The blue and orange HTV were originally purchased several months ago for a UK basketball shirt that I never got around to making, and the yellow HTV came as part of Silhouette’s HTV starter kit, which I’ve had for a year but have been too intimidated to dive into.  This yellow sheet is actually flocked HTV, so it’s got a fun fuzzy texture.

I created my mockup in Silhouette Studio to make sure my design actually looked okay once it left my little brain.  Luckily, my colorful numbered candle idea didn’t look too shabby!

First, I snapped a pic of the shirt and one of the fabric with my phone, then texted them to myself and imported them into Silhouette Studio.  From there, I added the fabric as a pattern, then filled the number 2 with it (since that would be my fabric piece), and lastly added the different elements and colored them to match their respective HTV colors. 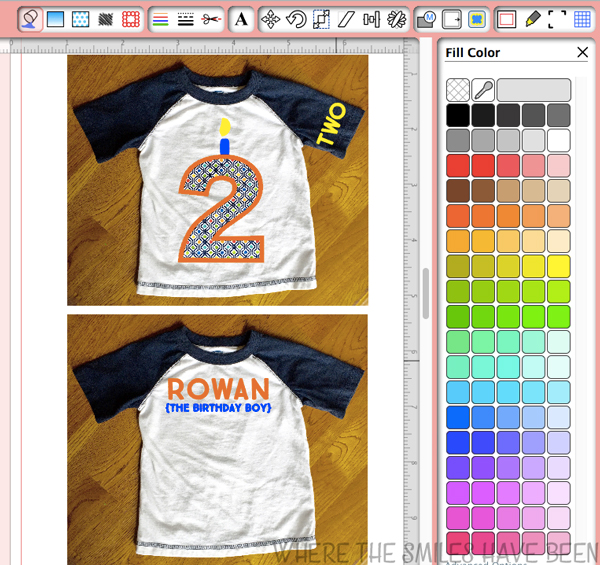 The Process in a Nutshell

{Like I mentioned, I’ll be writing up more in-depth tutorials for these steps, so stay tuned!}

I first ironed a piece of fabric to the interfacing then cut out the number 2 with my Silhouette Cameo, then I cut out the rest of the HTV elements in their respective colors. 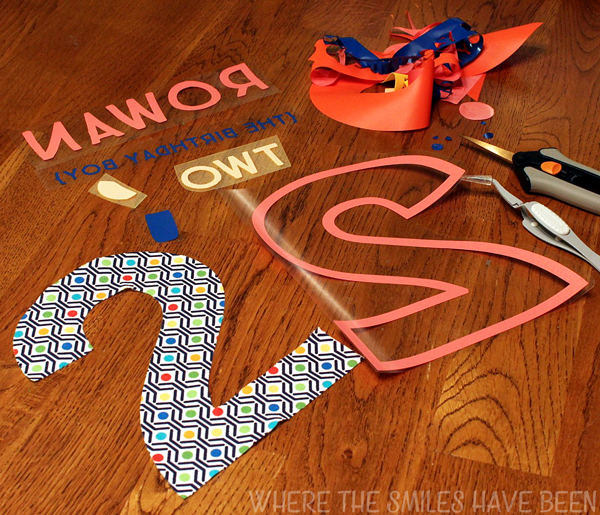 How to Cut Fabric & Make a No-Sew Appliqué:  To find out all the details on how I cut out this fabric two and made it a no-sew appliqué, check out this tutorial!

Next, I applied the fabric piece with my iron then added the HTV elements to the front, back, then finally the sleeve of the shirt. 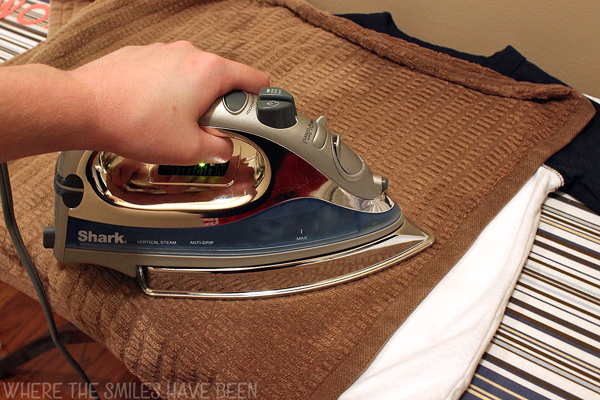 And here it is!  I am so happy with how this shirt turned out….another successful experiment!  It’s simple but still colorful and fun….and most importantly, it shows off that my little man is celebrating his birthday as a BIG two-year-old!  He’s already as cute as can be, so this shirt only enhances his adorableness. ;) 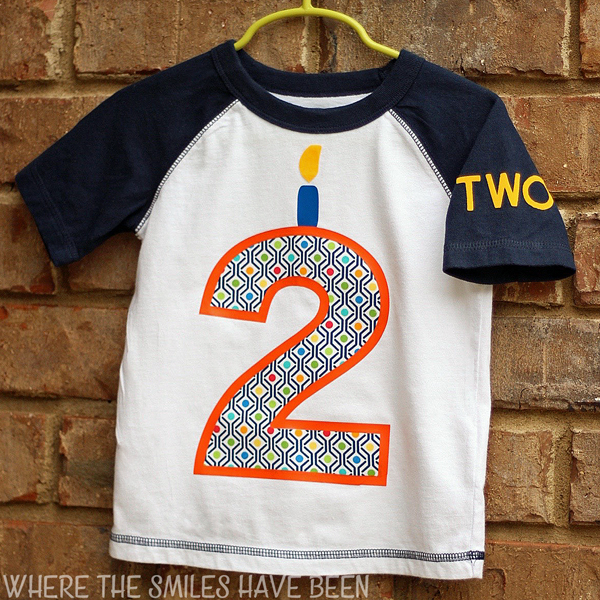 If you’re a regular reader, you know how I love all things personalized, so of course I was going to add his name to the back!  I also made it very obvious that it was his birthday too, just in case the giant numbered candle and number on the sleeve didn’t give it away. ;) 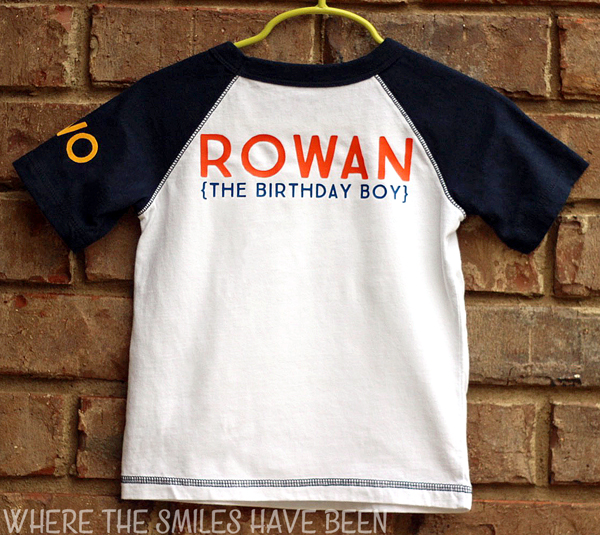 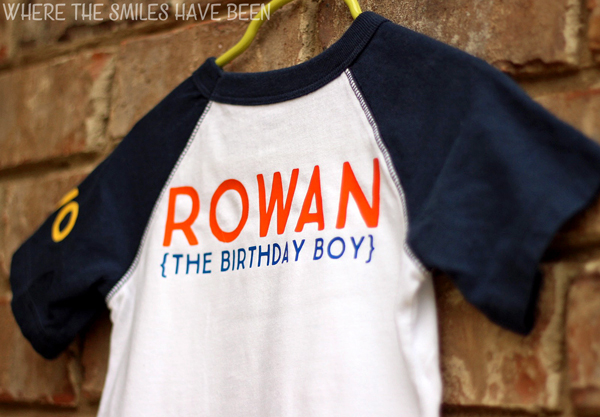 And I just love the little embellishment on the sleeve!  I mean, the design on the front and back is cool and all, but if you have something on your sleeve, then you are just *super fancy.*  At least that’s how I feel when rocking something on my sleeve.  Plus, it’s fuzzy! 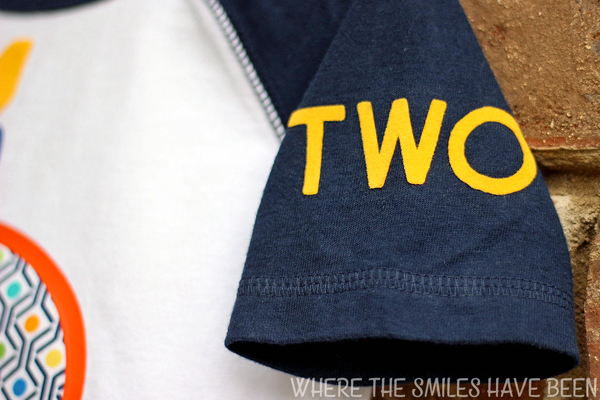 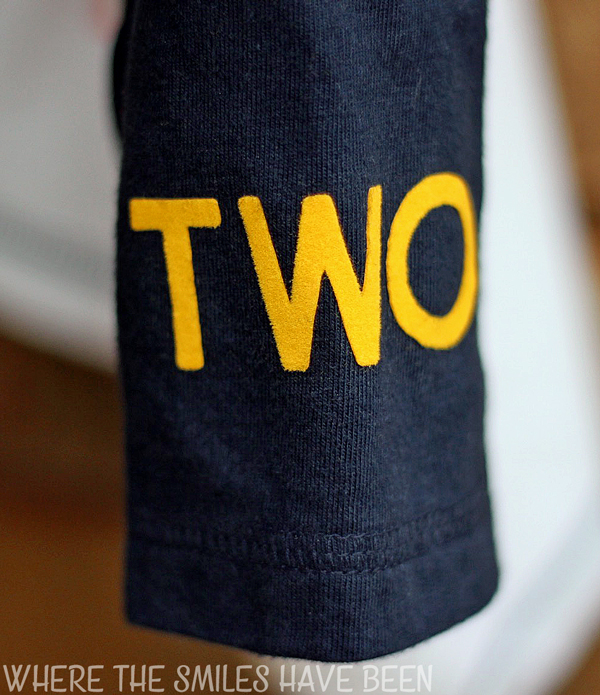 Rowan is your typical {almost} two-year-old and is in non-stop GO mode ALL. THE. TIME., so these were the best action shots I could get of him wearing this special birthday shirt…sorry, I’m not a professional photographer!  He was also given a tricycle and bike helmet by the grandparents as his big gift, and as you can see, he really enjoyed wearing his new helmet. :) 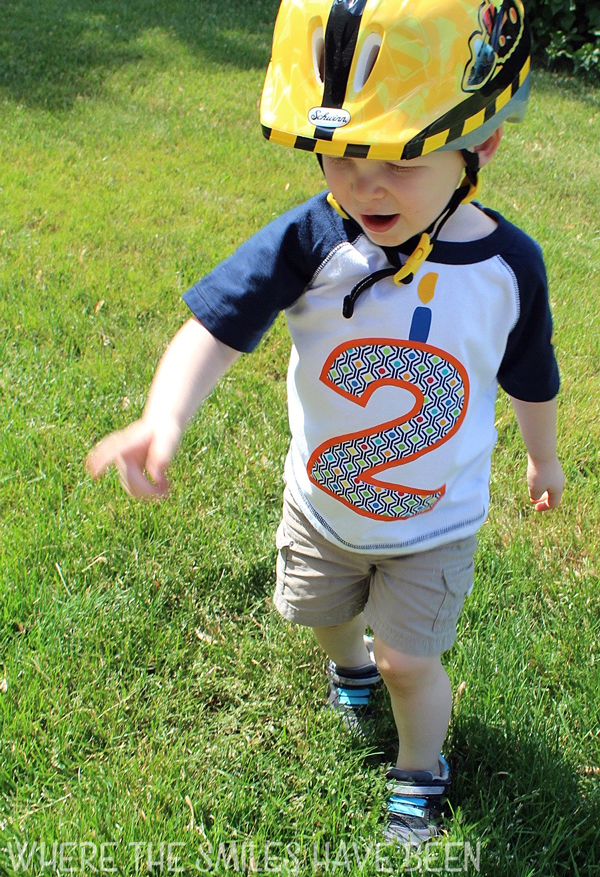 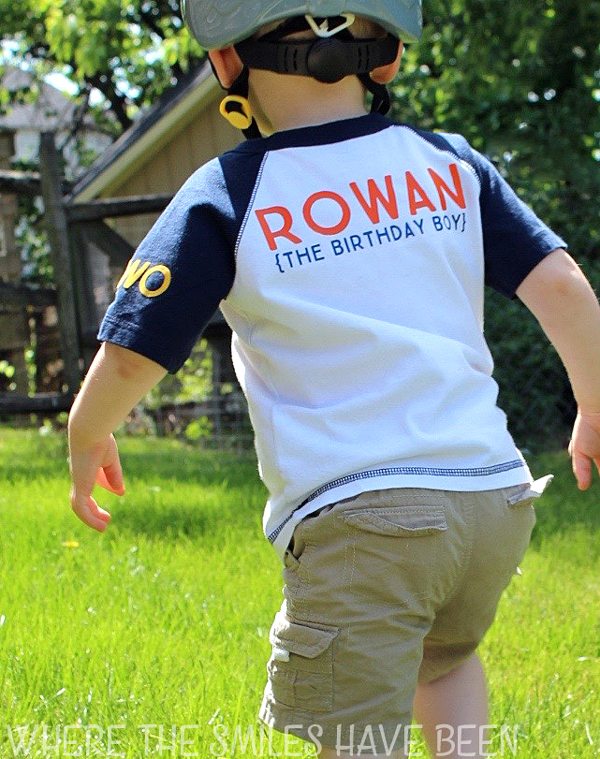 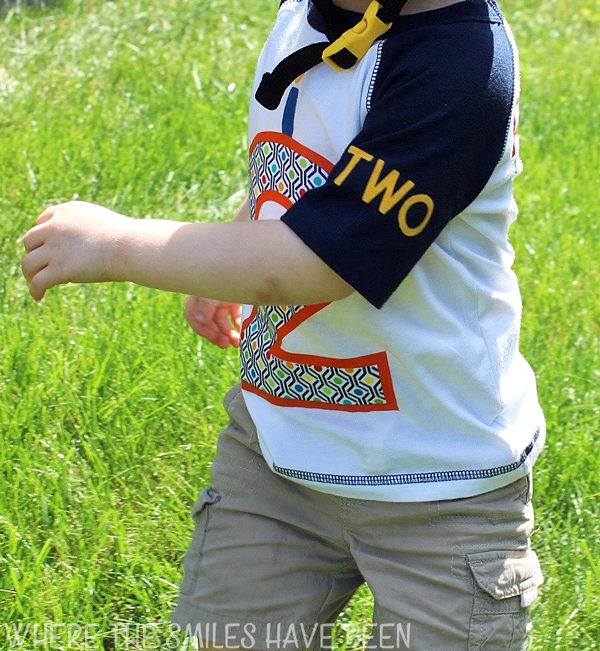 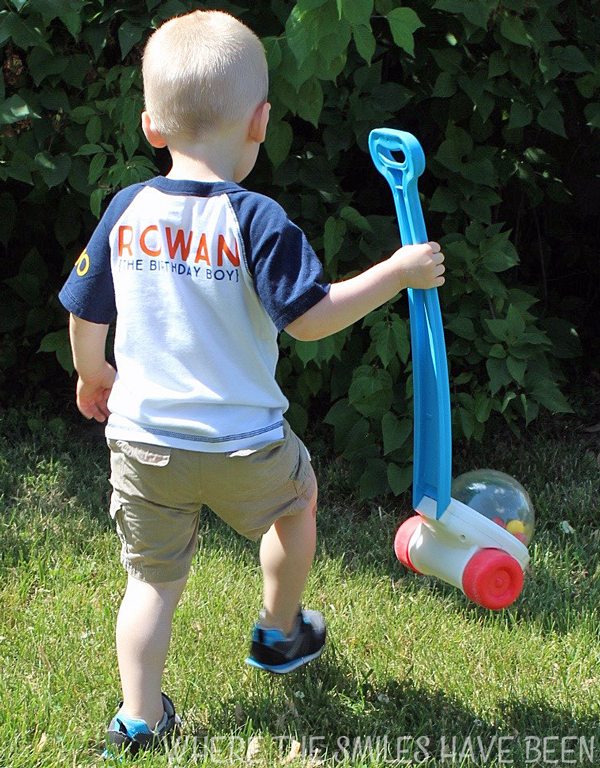 How It’s Holding Up

I’ve only washed this shirt once so far, and everything is holding up well for the most part!  I noticed that one of the brackets on the back as well as a piece of the orange edging around the fabric “2” started to come up a bit.  I just ran my hot iron over everything again and that seemed to reattach the pieces.  I’m still new to the HTV world so maybe my iron didn’t get hot enough or I didn’t leave it on long enough the first time??  Who knows.  All the more reason to invest in a heat press!  Ha!

Even if this entire design does eventually come up after repeated washings, that would be just fine with me since I’ll be able to create a new shirt for Rowan with a totally new design.  *When life gives you lemons….*

Be sure and check out my Project Gallery to see lots of other things I’ve created for my little man, including keepsakes and fun birthday goodies!

[…] this tutorial from Where the Smiles Have Been uses heat transfer vinyl and fabric applique, this shirt would be so easy to do with dark fabric […]

So cute! I just got my silhouette cameo a few weeks ago, so all I've been doing is reading and researching and haven't had done many projects yet! Quick question: How did you get your phone photo onto silhouette studio? I noticed you said "texted" it to yourself. Is it linked through Bluetooth to your cameo?? I'm curious and would love to know. Thank you in advance!!

Hi Christine! Great advice and tutorial on he new see appliqué! Quick question for you- how did you cut out the HTV 2 outline? I know you used your cameo, but did you design the outline and the fabric number 2 together and then cut them separate? ....does that even make sense? Thanks!

Rowan is 3 days older than The Cute (our daughter).

I loove that robot blouse! And the 2 you made this year is as fantastic. You make really pretty designs. :)

(The tutorial is excellent, I just don't have a silhouette to try it.)

I think it's cute (ha!) that the nickname for your daughter is The Cute! :) And happy belated birthday to her! Thanks for all the kind words too....and if can ever snag a Silhouette, do it! I'm totally obsessed with mine, and I'm sure you would love one as well!

Adorable!! I have a Silhouette Cameo in my Amazon cart right now, I just haven't clicked the order button. The ability to put a picture of the shirt right in the editing software is so cool! Thanks for sharing your "experiment" AND for linking up at our new link party Dream. Create. Inspire. We'd love to have you back on Tuesday at 7!

Oh Jenny, if you click 'Buy' on that Silhouette in your Amazon cart you will NOT regret it! Promise! It has seriously changed my life (and is actually what got me started with this blog). Thanks for hosting a great party and I'll definitely be back! :)