If you couldn’t already tell, I LOVE creating personalized goodies of all kinds.  They’re what really makes a house a home, right?

And speaking of home….we’ve got three of them!  You see I’m from Kentucky, my husband grew up in Maine, and we’ve lived in Alabama now for five years (and it’s the only home my son has ever known).

Because of this, I thought it would be nice to create a set of ornaments that represent all three of our homes.  It would also give me a chance to test out a fun new painting technique that creates a rusted metal look….without the need for metal! 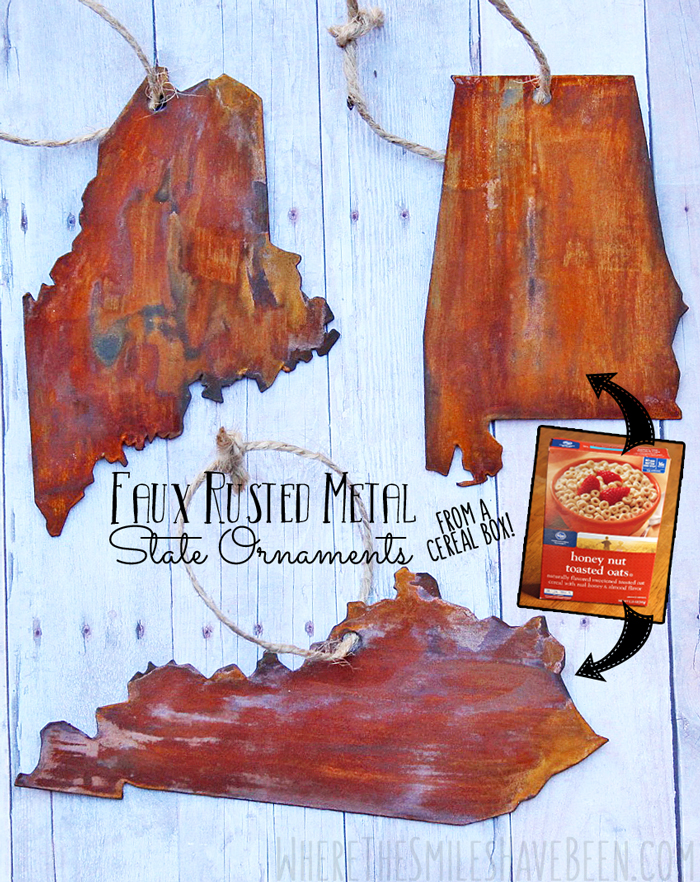 Even more fun: I’m taking part in a super festive Home for Christmas blog hop that is sponsored by Hometalk.com and CountryLiving.com!  Keep reading to see tons of other incredible home and garden holiday creations! 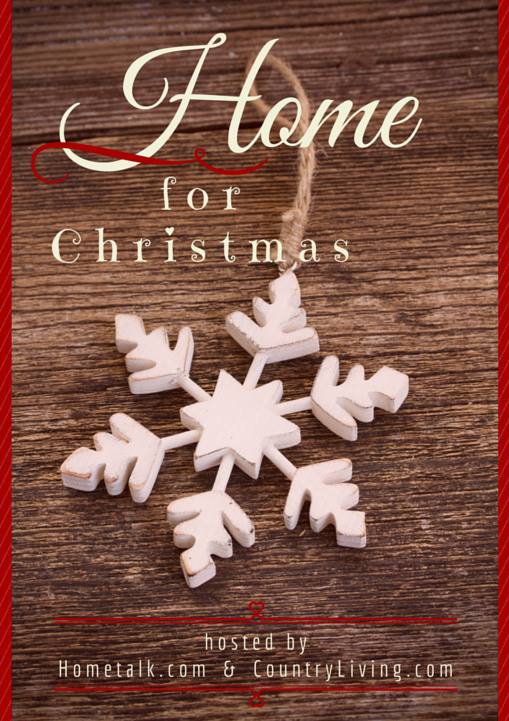 Cutting Out the State Shapes

I’m all about frugal DIY projects, and why buy chipboard when I’ve got a free alternative right in my kitchen?!  Yep, cereal boxes are one of my favorite crafting supplies to work with (you can check this out to see why I love them so!).

I first raided our pantry and pulled out one such box…. 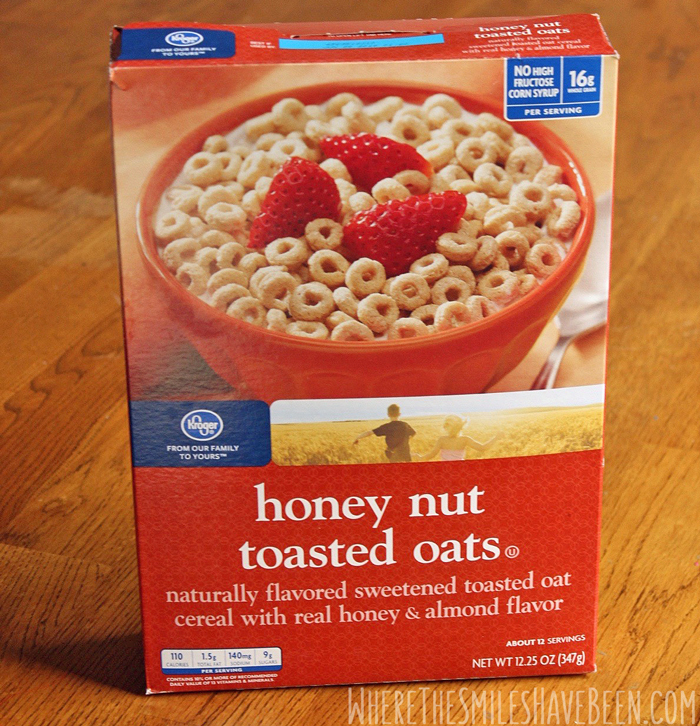 ….then started dissecting it until I had one of the large panels removed and trimmed. 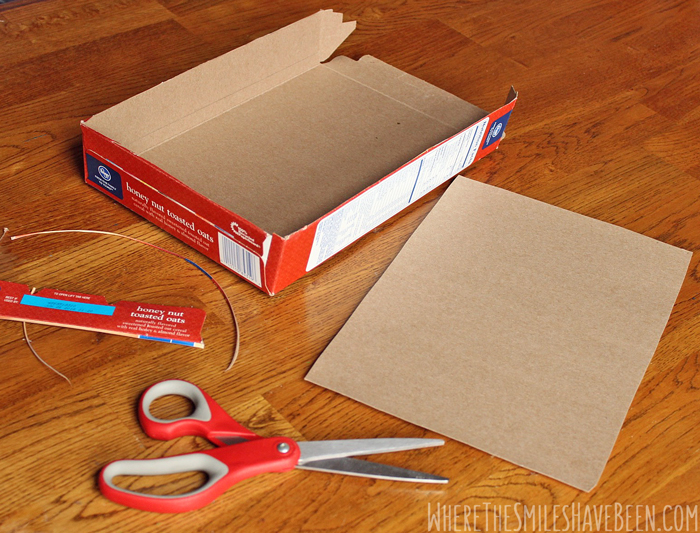 I’m totally obsessed with my Silhouette Cameo, so that’s what I used to cut out the state shapes.  However, you certainly don’t need a fancy machine!  This project can easily be done by just printing out some maps then tracing them on a cereal box, and then cutting them out with some scissors or Xacto knife (and this would be a cinch if you got lucky and have a simple shape like Colorado!). ;)

{For a full tutorial on how to cut cereal boxes with a Silhouette, check this out!  And if you’d like some more deets on how I easily get state shapes into Silhouette Studio, check my tutorial showing how to layer vinyl and create a cute & feminine home state decal!} 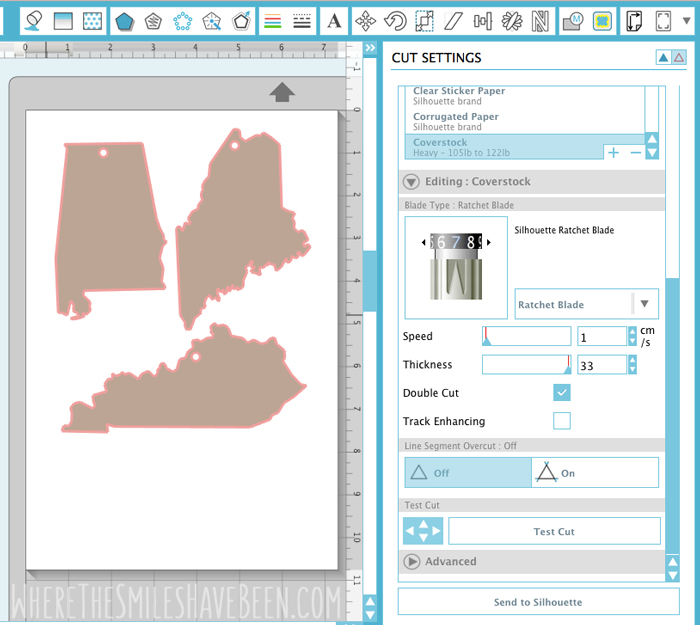 I then added the panel onto my cutting mat and into my Silhouette Cameo.  A few minutes later, I had three perfectly cut states! 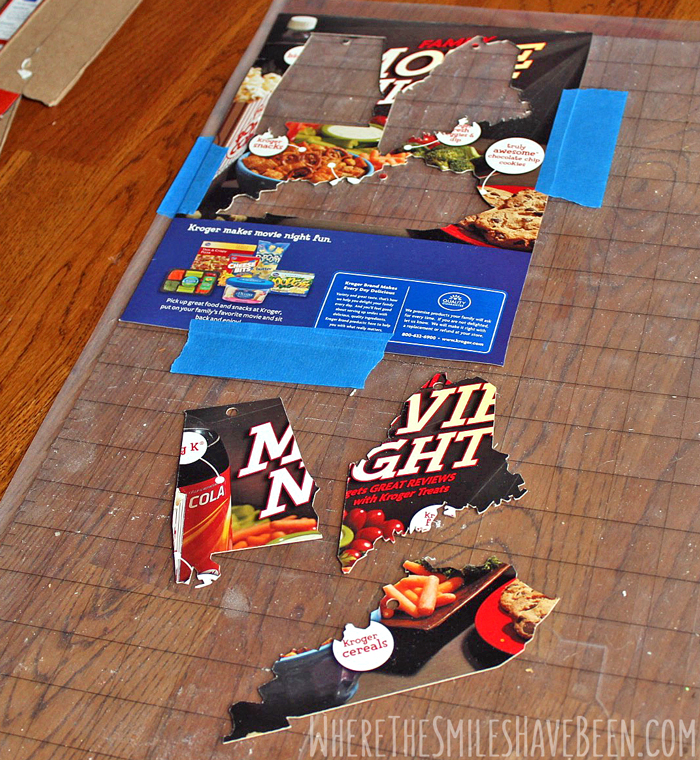 {NOTE: This was actually the second set of state shapes I cut out.  My first set was cut with the panel’s inside (non-printed and therefore non-glossy side) face-up, and it didn’t result in a strong rusting effect.  More on my experimentation below!}

A Blast of Black Spray Paint

In order to prevent the cereal box’s print from showing through the iron paint (another lesson learned from my first set), I needed to blast the states with a coat of black spray paint. 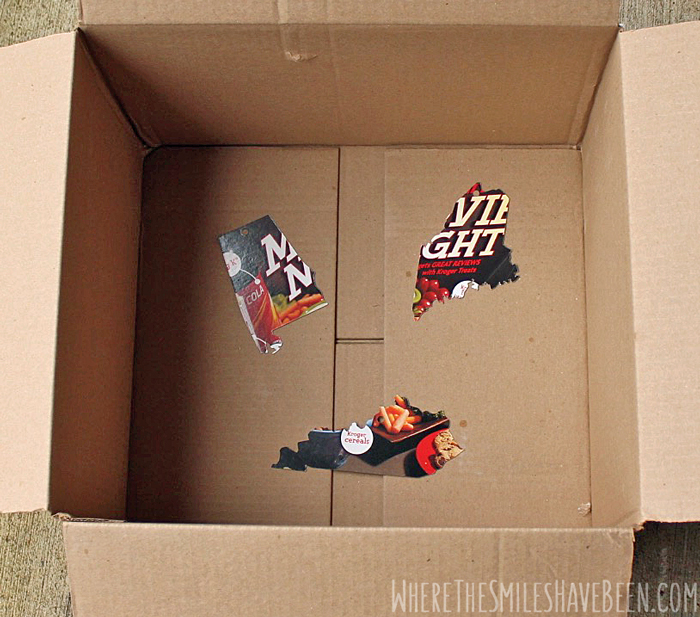 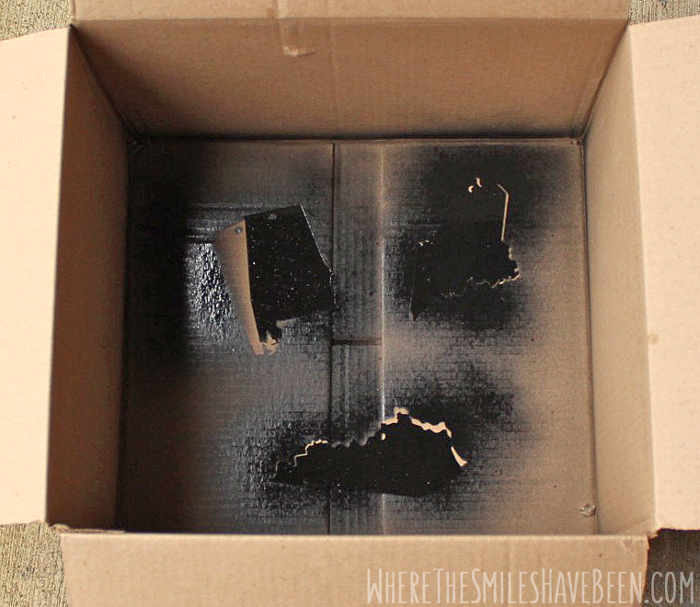 Once the spray paint was dry, it was time to get to the fun part!  Here are the goodies that easily allow for the nifty rusted metal effect.

It’s just some Modern Masters Oxidizing Iron Paint followed by a little Rust Activator, both of which are a part of their super cool Metal Effects line.

I’ve previously used some of their copper paint and blue patina spray that results in a beautiful faux aged copper effect.  Check out these three tutorials as well! 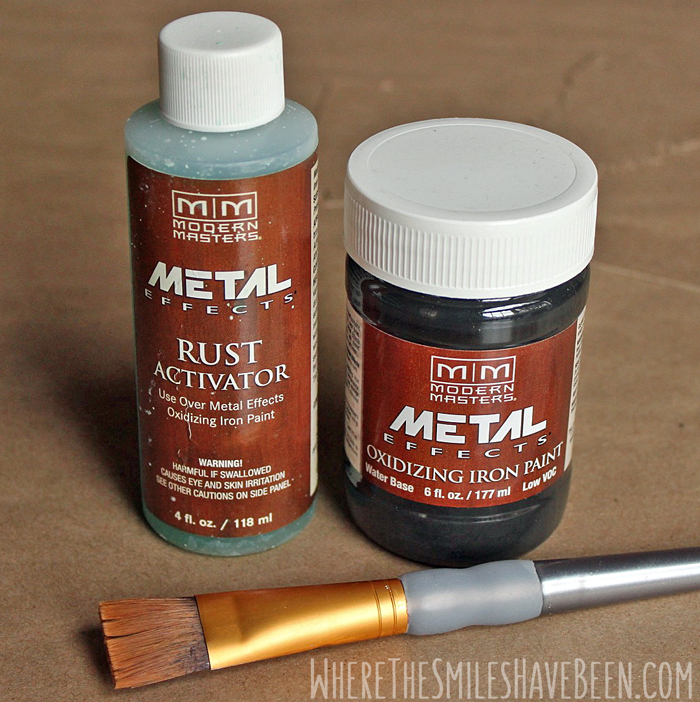 One of the cool things I’ve discovered from working with the copper paint and patina spray is that no two projects will be alike!  The final results will always be different.  It’s super fun to experiment with because, like Forrest Gump’s box of chocolates, you never know what you’re going to get!

I first applied a couple coats of the iron paint to both sides of the state shapes.  It absorbed very evenly to the cardboard (non-glossy) side…. 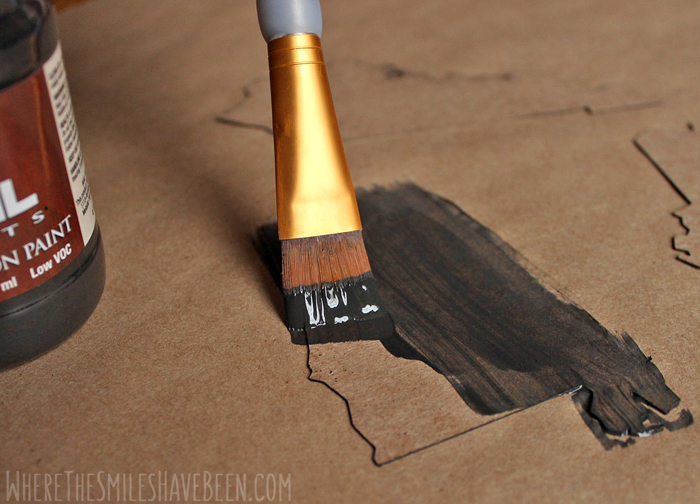 ….but didn’t want to stick evenly to the painted side.  Here’s what the front sides looked like after both coats.  As you can see, it’s not a smooth, even covering, but that actually works in my favor for this project….it helps to give the upcoming rusting effect more character! 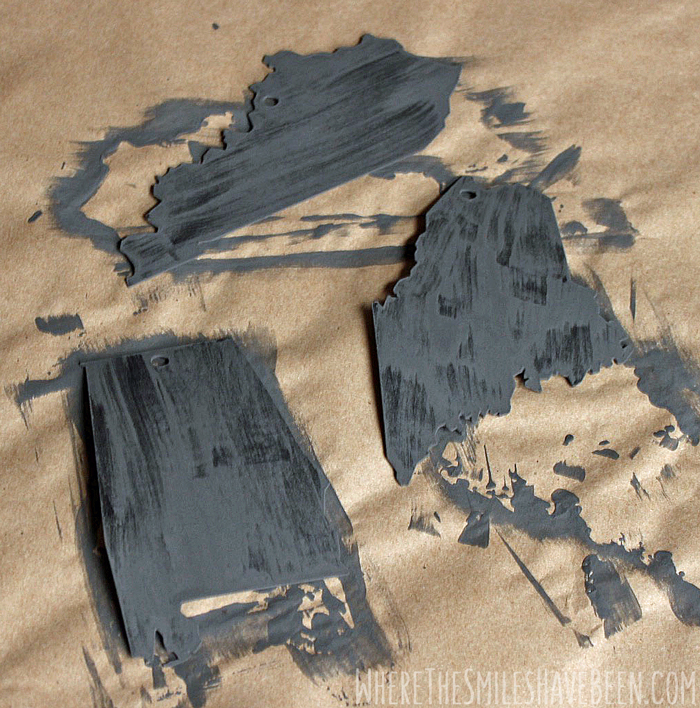 Speaking of the rusting effect….let’s go!  Once the iron paint was completely dried, I started applying the rust activator liquid, again with the brush (you could also spritz it on with a spray bottle, use a roller, or just splatter it on like Jackson Pollock.  So many ways to play with it!).

Following the directions on the bottle, I applied another coat five minutes later….and waited.

The rusting effect takes a while to start appearing.  And by a while, I mean I wondered if it was ever going to appear, or if I had a craft fail on my hands (I’ve had more than my fair share of those).

This was different from how the copper paint and patina works.  That effect is noticeable almost instantly.  But a little suspense never hurt anyone! 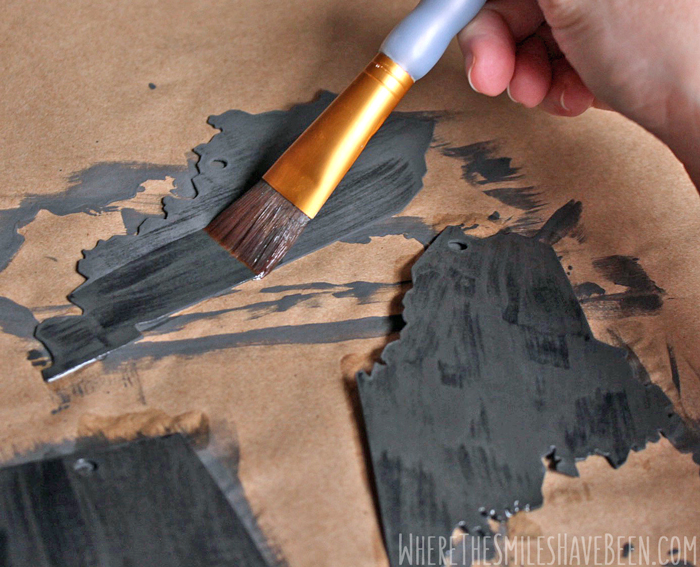 After about an hour or so, here’s how the rusting was looking.  Pretty cool, huh??

After the two coats of rust activator had completely dried, I continued with my craft experimentation and added more activator haphazardly.  I then went back and started dabbing on a little more of the rust activator here and there, heavy in some spots and lighter in others.  I just wanted to see what would happen.  Because why not.

The Kentucky one had several more complete coats added very heavily, Alabama had a light third one applied, and Maine got some more dabbed on randomly here and there. 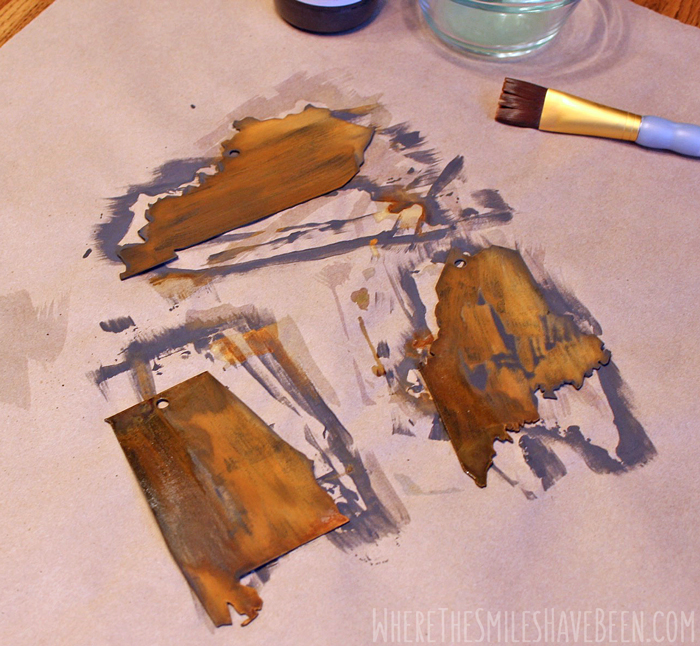 And here’s how my three state ornaments turned out!  I just think they are soooo cool, especially because they were a boring cereal box in their previous lives!  I also really like how the rusting effect turned out differently on all three….you gotta love experimentation and crafty surprises!

This is such a simple and frugal project (I mean, FREE cereal boxes, and the iron paint and rust activator go a long way).  It would be neat to try with different non-state shapes….countries, names/monograms, traditional holiday shapes, gift tags, etc.  There are so many fun possibilities! 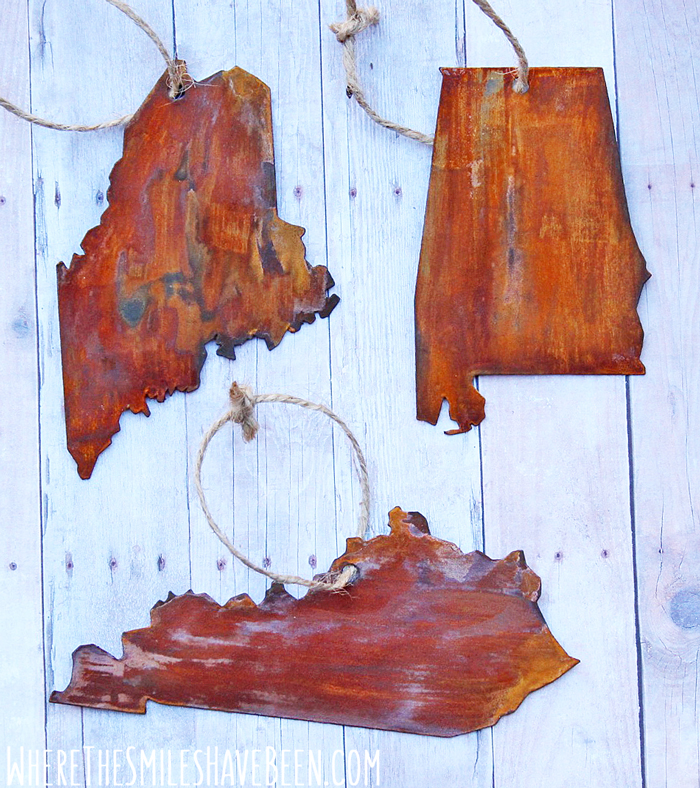 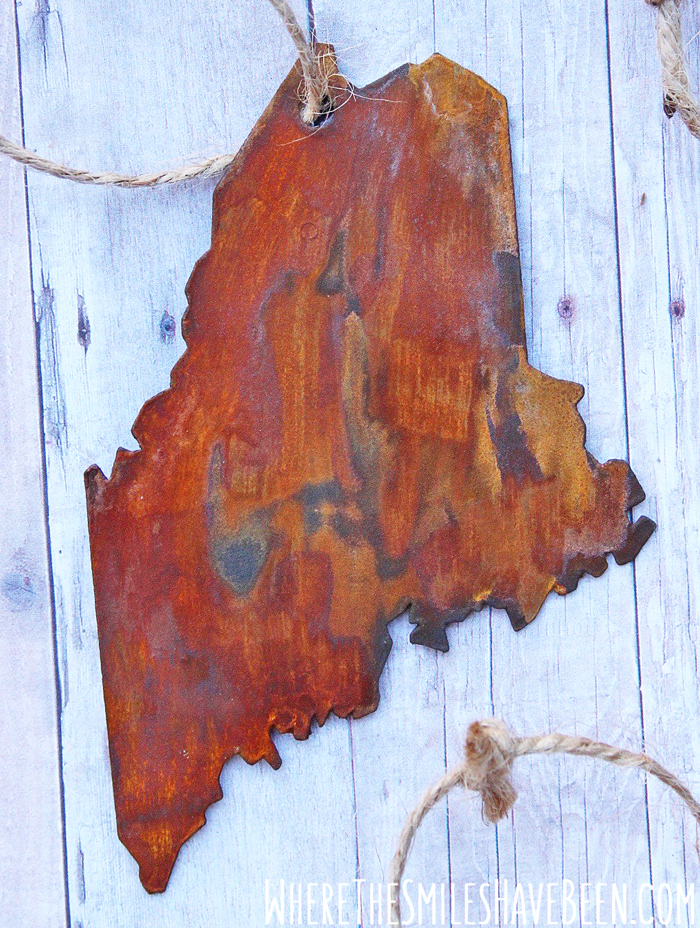 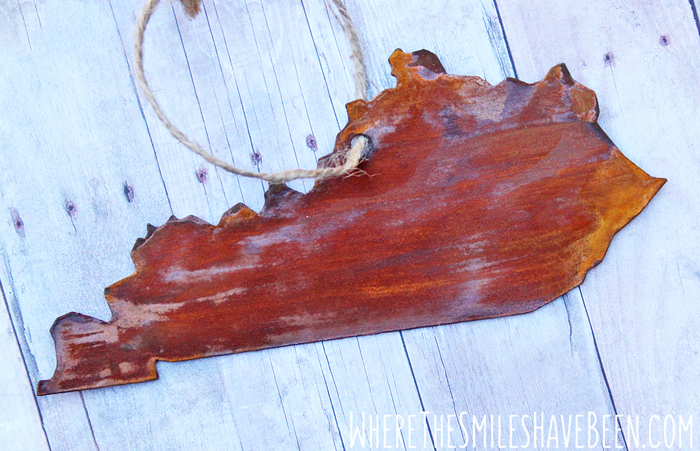 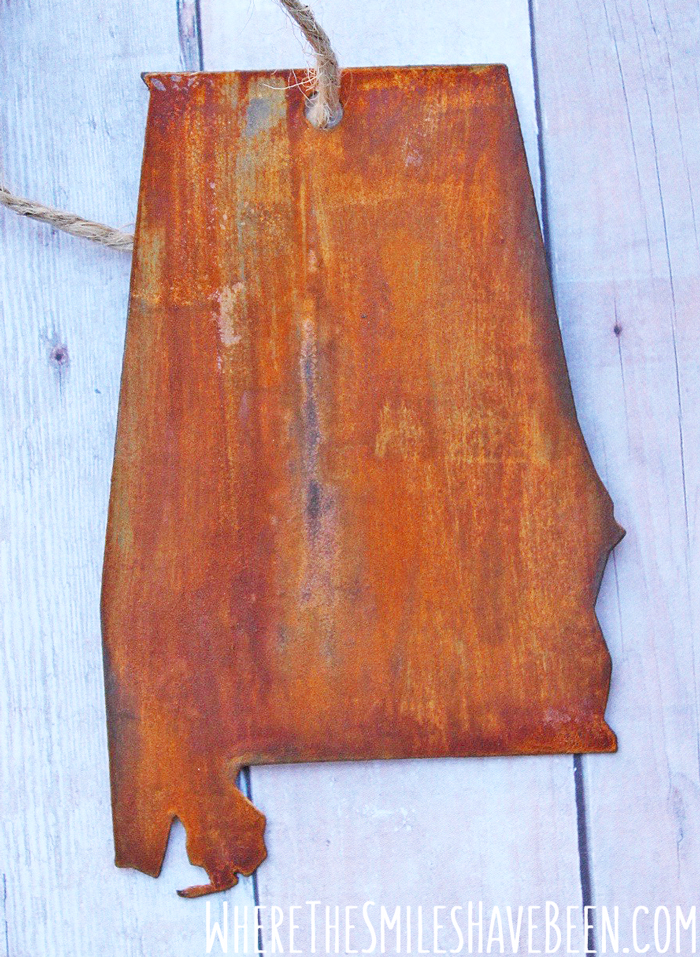 These add a neat little industrial vibe to our tree that was previously missing.  My husband really likes them because they’re “manly.”  I, however, enjoy displaying unique pieces of home….all three of them. :) 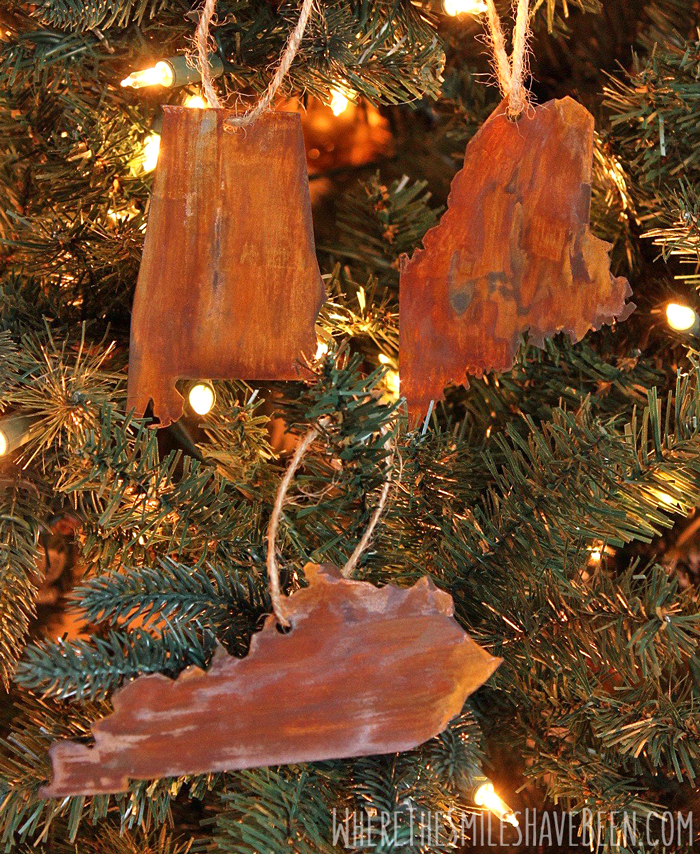 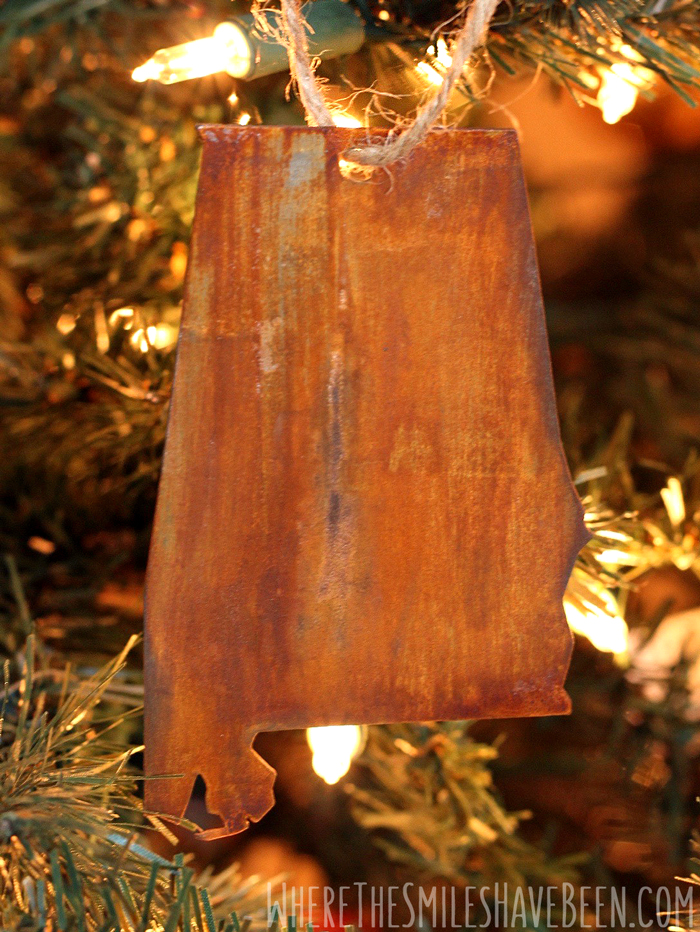 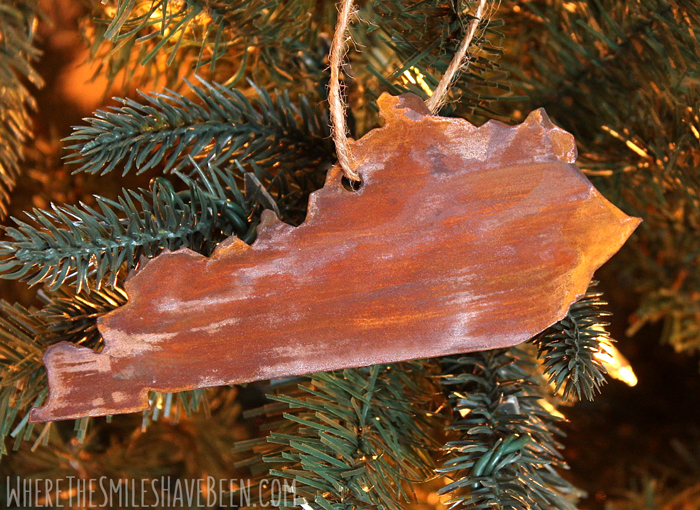 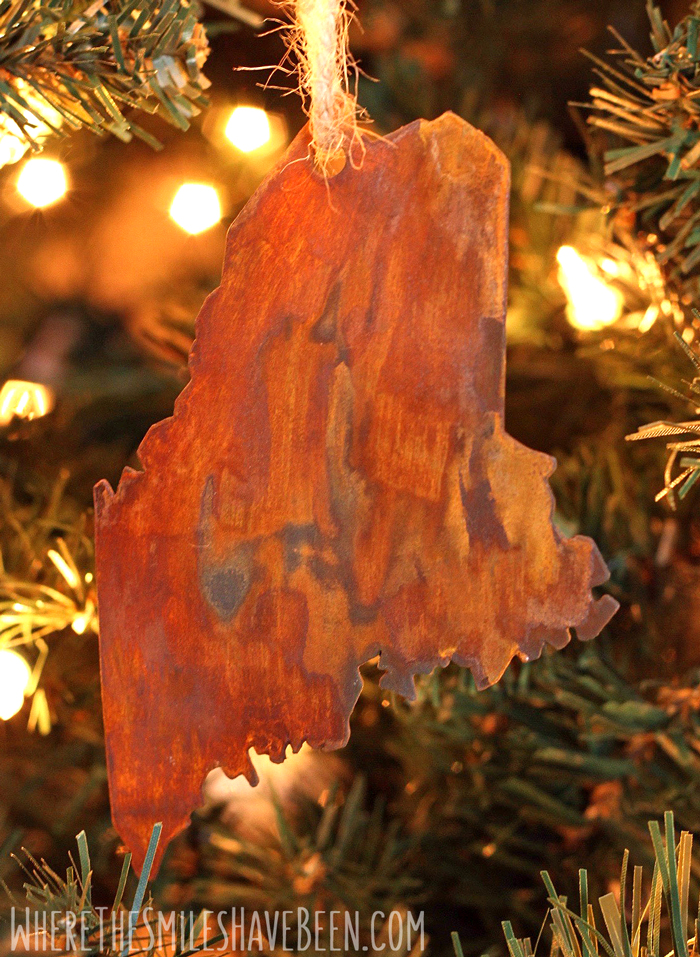 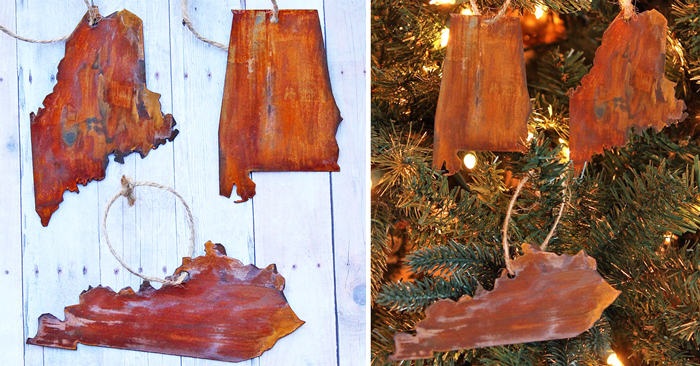 Use the GLOSSY Side of the Cereal Box!

You can see the final results in the photo below.  The first set (non-glossy side) is on the right and my final second set (glossy side) is on the left.  What actually happened the first time around was that the iron paint seemed to absorb too much into the cardboard and the rust activator didn’t have much of an effect.  Maybe some of the Metal Effects primer would have saved the day here?  Who knows….live and learn! 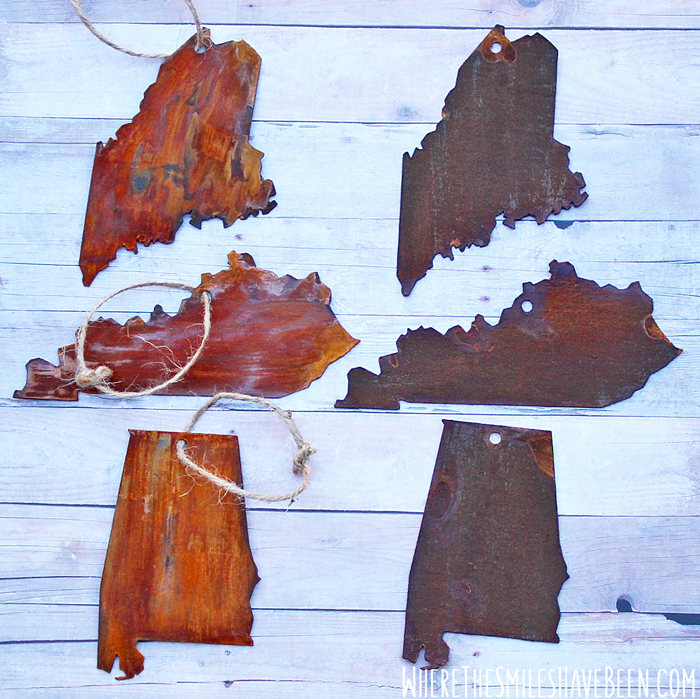 Make sure you check out these other festive home and garden creations that are also being shared today in the Home for Christmas blog hop!  And be sure to search for the #HomeForChristmas hashtag across social media so you don’t miss a thing!

Here are some other Christmas creations I’ve shared, and check out my Project Gallery for lots more inspiration! 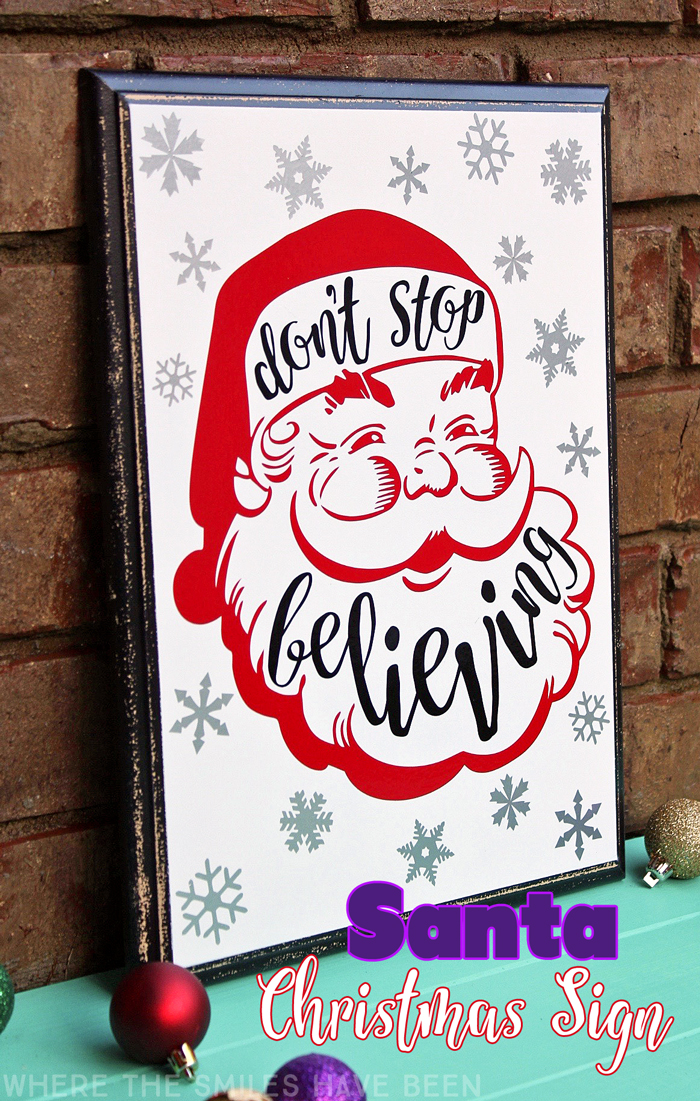 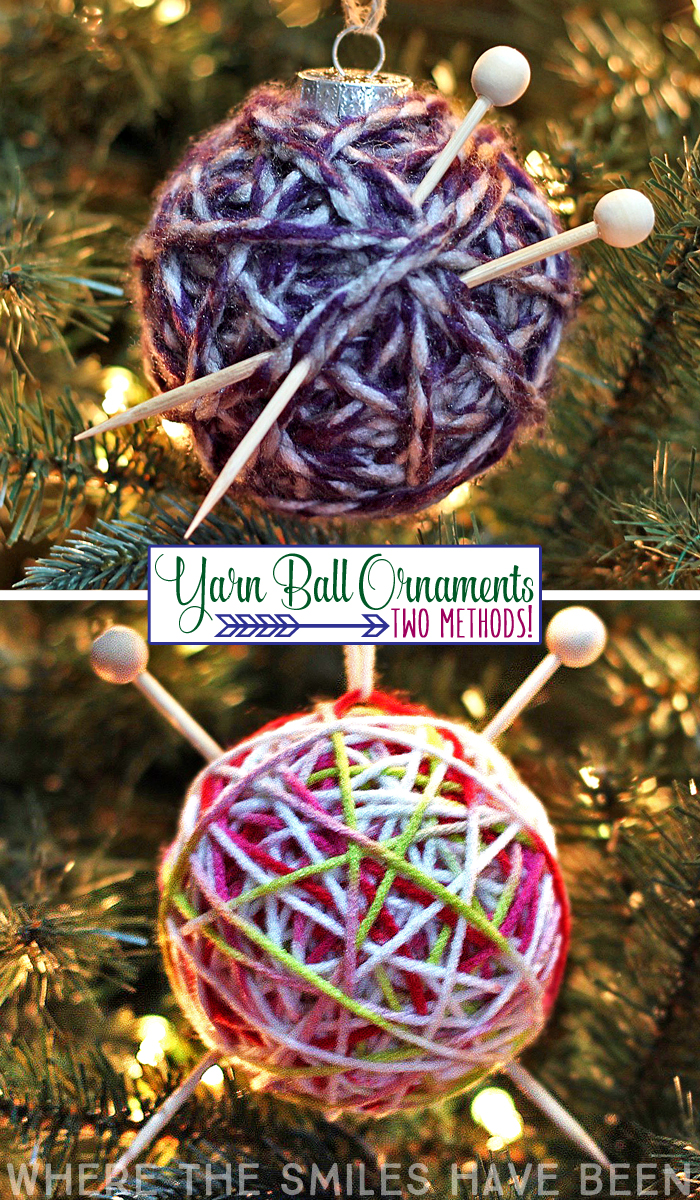 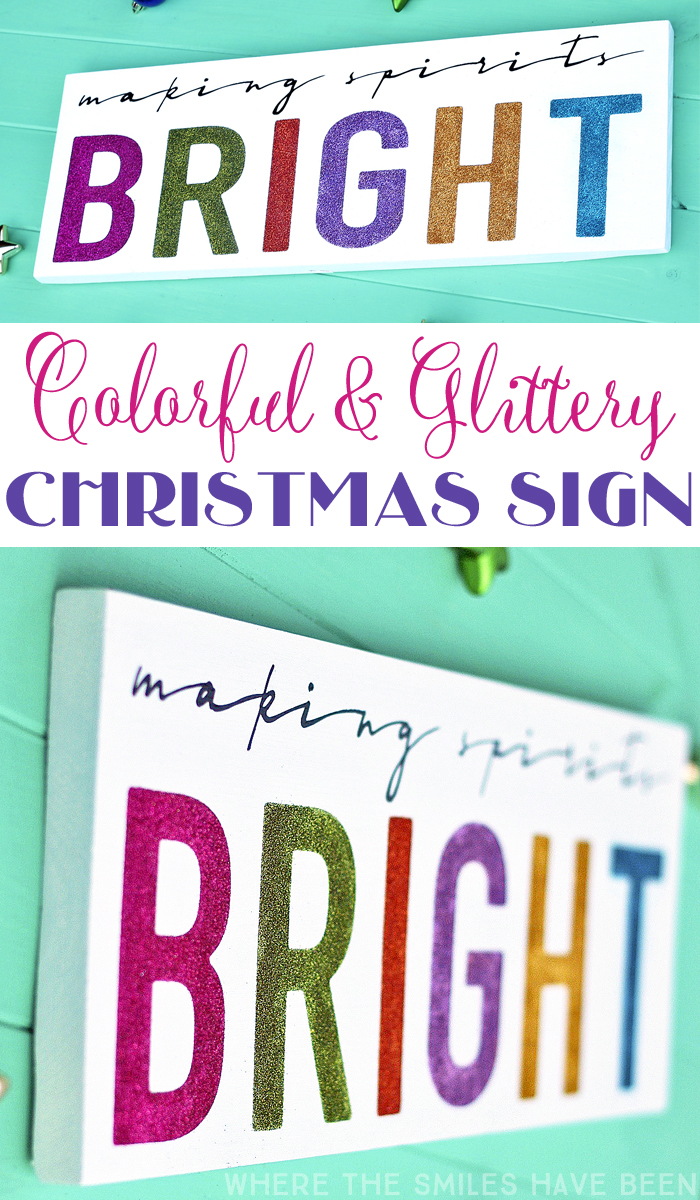 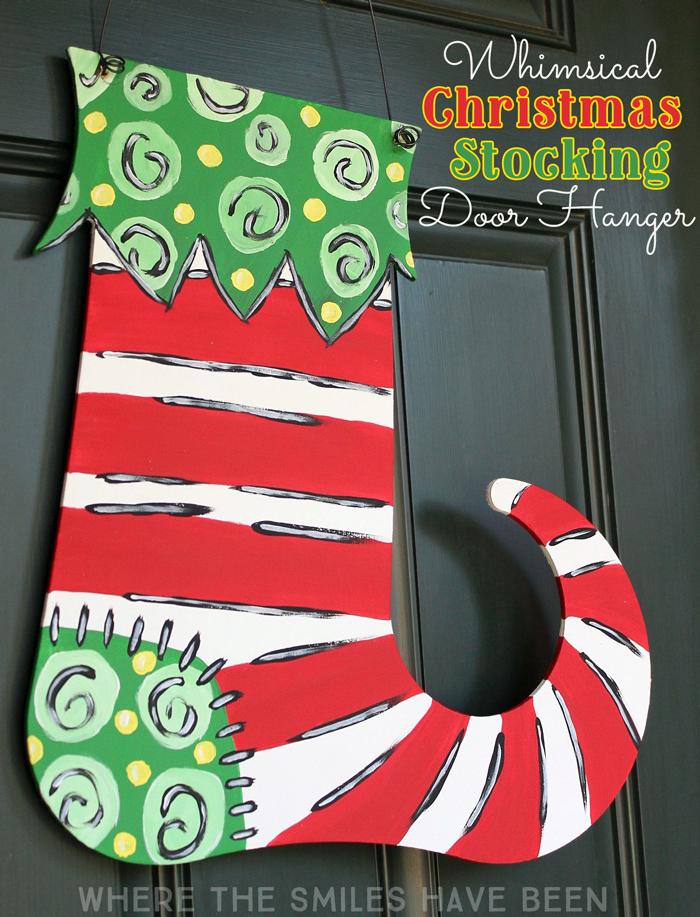 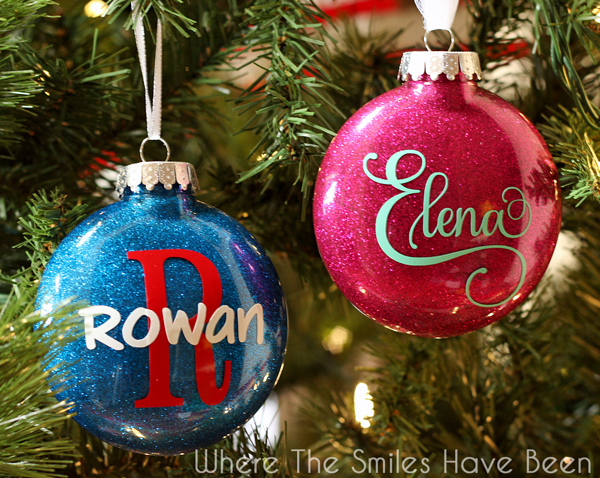 Thanks so much for stopping by!  Merry Christmas!

How sweet! I have fallen in love with it!!! I'm an avid DIYer and always try to be busy with some new projects. Was searching for a unique idea to start. The Faux Rusted Metal State Ornaments made me stop and crazy to make them asap! In a hurry to start. Wish me good luck, Christine! :)

What a great idea--very cute!

Thank you so much, Becky! I love having our three little homes represented on our tree now. :)

Marie from The Interior Frugalista

These caught my eye during the link up and I honestly thought they were metal state ornaments. Very cute idea! Pinned to share :)

I thought these were metal for sure! Brilliant and inexpensive!