Last summer, my son celebrated his first birthday.  As part of the festivities, I decided it would be fun to start a yearly tradition where he creates (with the help of momma of course) an art canvas every birthday.  I mean, I’m a crafty gal, so I’d like to pass my creative streak onto Rowan.  He’s already got my eye and hair color, laugh, as well as my clumsiness, so why not this too?

His second birthday was just a couple weeks ago (still can’t believe it!), so we officially made it a tradition and created another birthday art canvas for Year 2.  It’s still just finger painting of course, but I’m hoping that as the years progress, so will his skills….but I kinda like these random, colorful prints too. :) 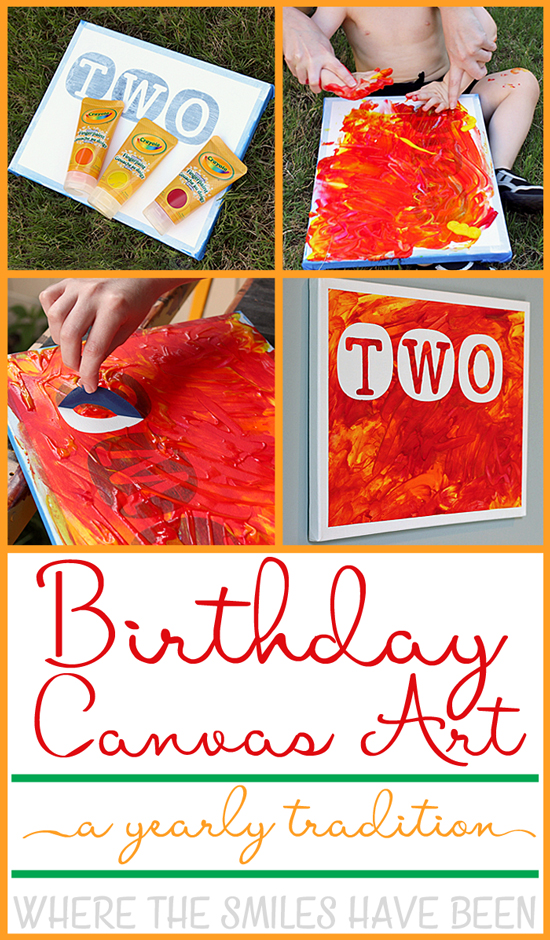 Here’s what I used for this project:

Instead of recreating the wheel, I’ll spare all the prepping steps here, but you can check out my first birthday art canvas tutorial to see all the details on how I prepped the canvas and created the stencil with my Silhouette Cameo. 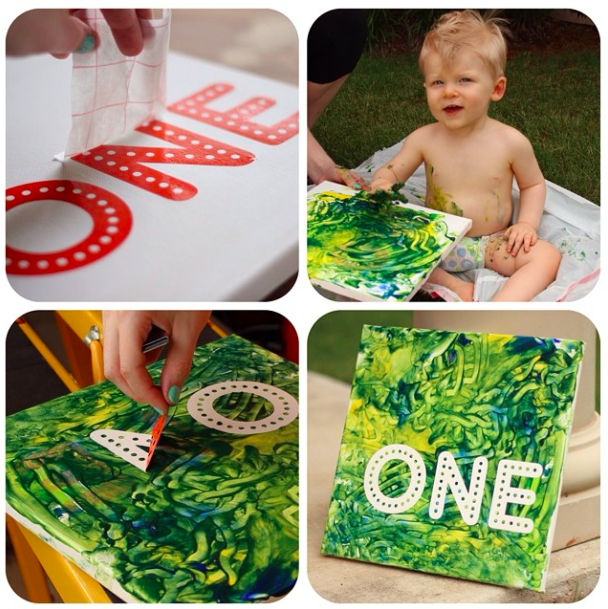 I followed the exact same steps, although for this second birthday canvas I decided to also add a border of painter’s tape to keep the edges nice and clean.  It worked well when I made Rowan’s newborn stats canvas and it’s definitely something I wish I would have thought about before doing our first birthday one, but hey, ya live and learn. 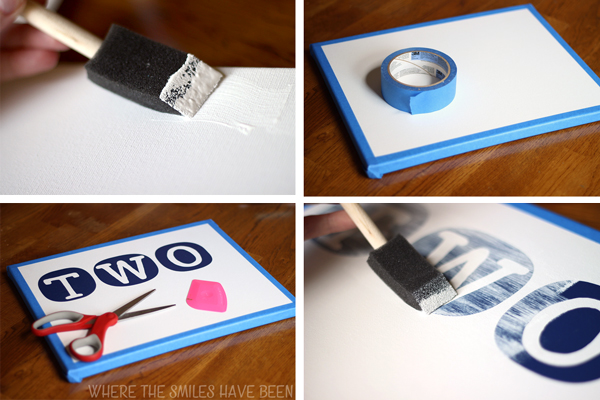 So here’s how the canvas looked after being prepped with the white paint, vinyl stencil, and painter’s tape border.  For this year’s canvas, I decided to go with orange, yellow, and red finger paints.

That way it would compliment the blue, green, and yellow colors of last year’s canvas, and still coordinate nicely with his room. 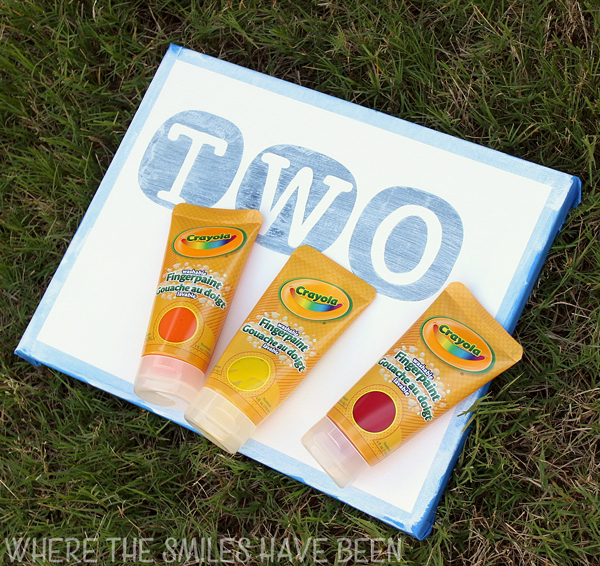 We took Rowan’s shirt off but left him in some black cotton shorts and swim shoes since he’d be playing in the sprinkler after this little art project.  Plus, the paint is washable so his attire won’t be ruined by any rogue strokes.  We also skipped the garbage bag blanket this time around; I told my husband to chill with his “no paint on the grass” rule (I get a little crazy with spray paint ONE TIME and he just can’t let it go….geesh.)

So Year Two’s canvas proved a little more challenging than Year One’s, thanks to now having a picky toddler as opposed to a care-free infant…..ahhh, I’m just loving these Terrible Twos already, let me tell ya.

But this is going to be a TRADITION, dammit!  And we’re all going to have FUN!  (I have to say I felt a little like Clark Griswold in Christmas Vacation….“We’re gonna have the hap-hap-happiest Christmas!”)   So Rowan just got a little extra help from Mommy Dearest. :) 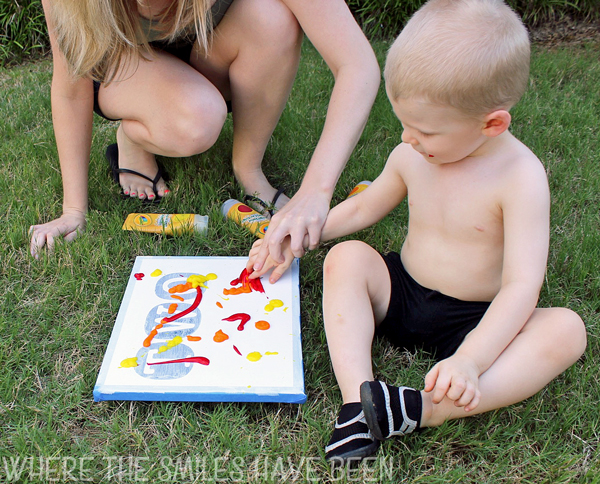 I had to help the little man out a bit and really cheer him on and demonstrate what we were trying to do.  I wouldn’t say he became a totally willing participant, but at least he didn’t resist completely….and started to embrace the dirty hands for a moment. 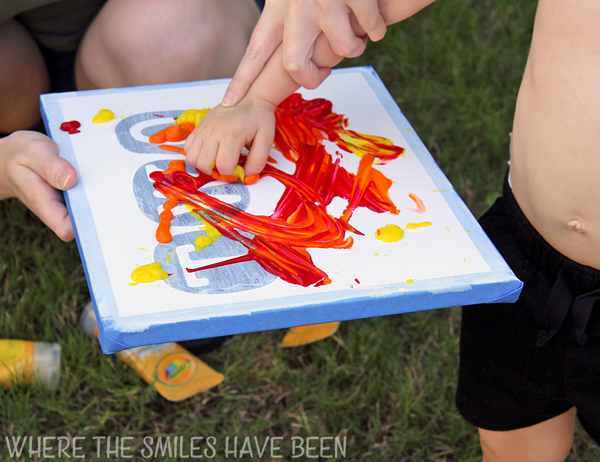 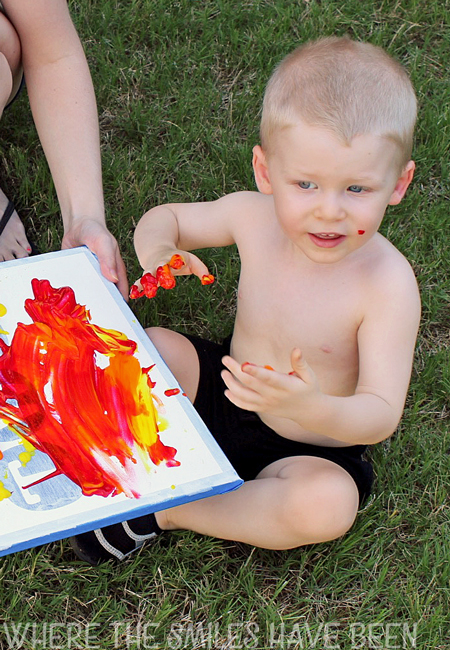 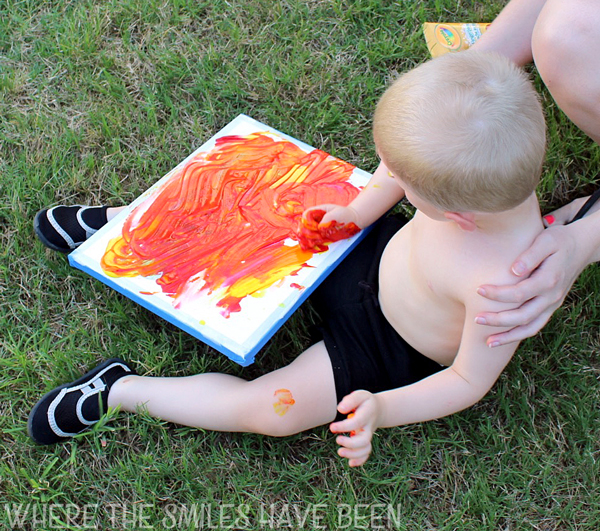 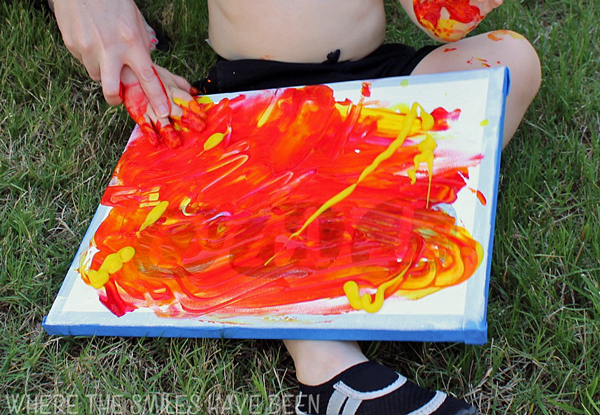 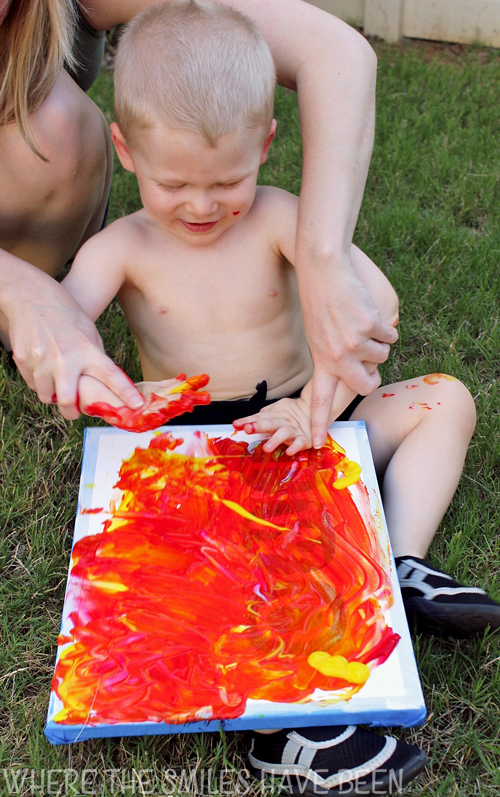 Once the entire surface of the canvas was covered in paint, it was time to clean-up (and Rowan was certainly happy about this!).  Several paper towels removed most of the paint from him and his clothes, and then we hooked up the sprinkler and let that do the rest….plus the boy loves it. :)  After a little summertime fun in the backyard, it was time for a bath! 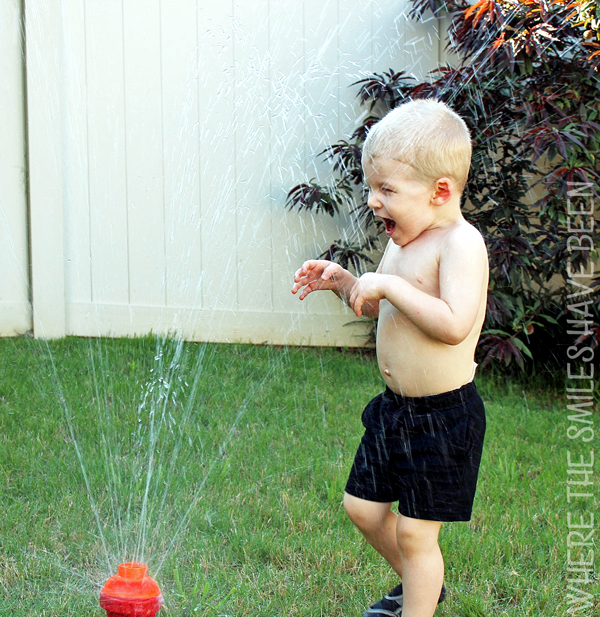 I left the wet stencil to dry outside for a couple hours.  Once most of the paint was pretty dry, sans the big globs, I started removing the stencils.  It was pretty easy to do….I just used the tip of my craft scissors to peel up the edge of each piece until I could grab it with my fingers, then I sloooooowly started to peel them off.

The paint bled a tad bit in a few spots underneath the vinyl, but I just touched up those areas the next day with the white craft paint and a fine brush.  Then I removed all the painter’s tape from the edges….and there was no bleeding there! 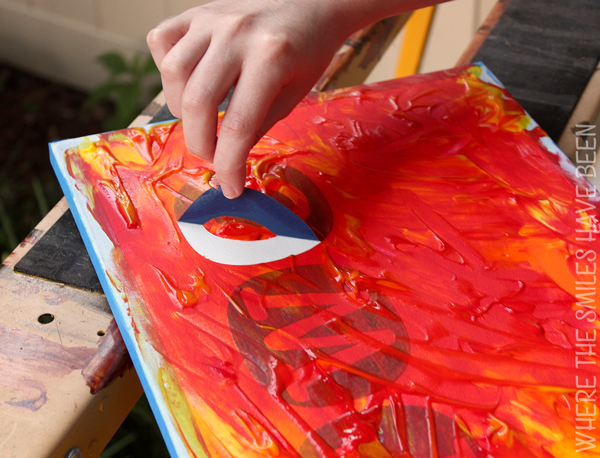 And here’s the final second birthday art canvas hanging in Rowan’s room!  It looks great next to his first birthday canvas and provides a great pop of warm color that’s still keeping with his room’s theme.  My husband says it reminds him of autumn, while I see a Hawaiian lava flow.  Gotta love abstract art. ;) 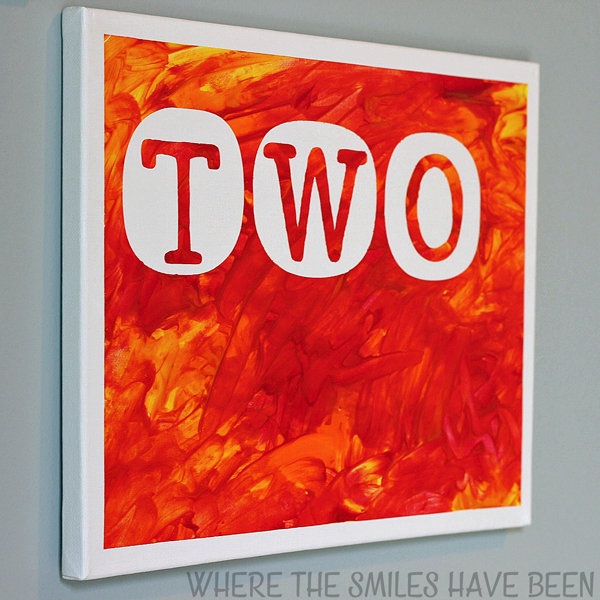 See what a difference adding the painter’s tape around the edges makes?? 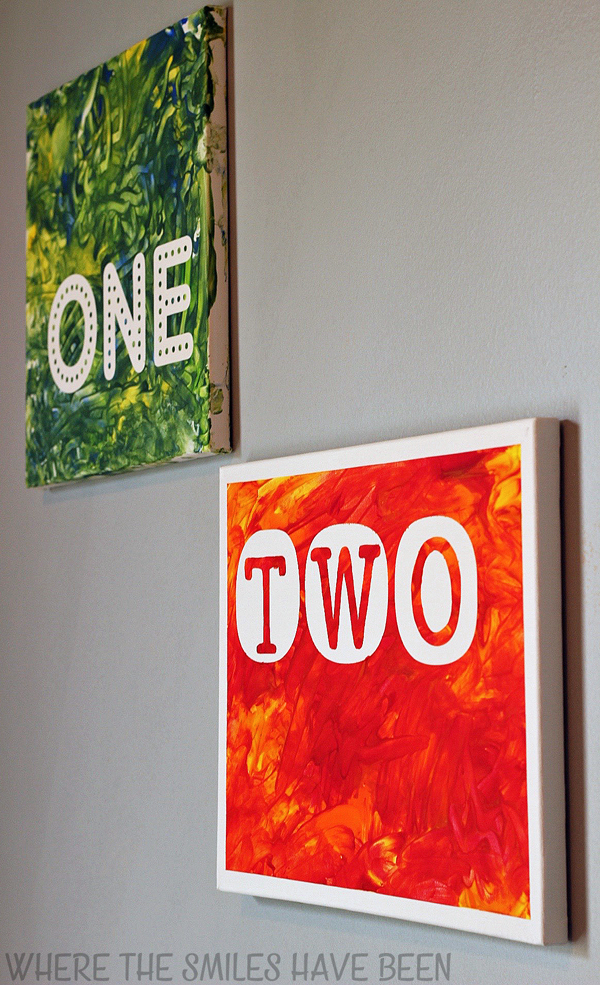 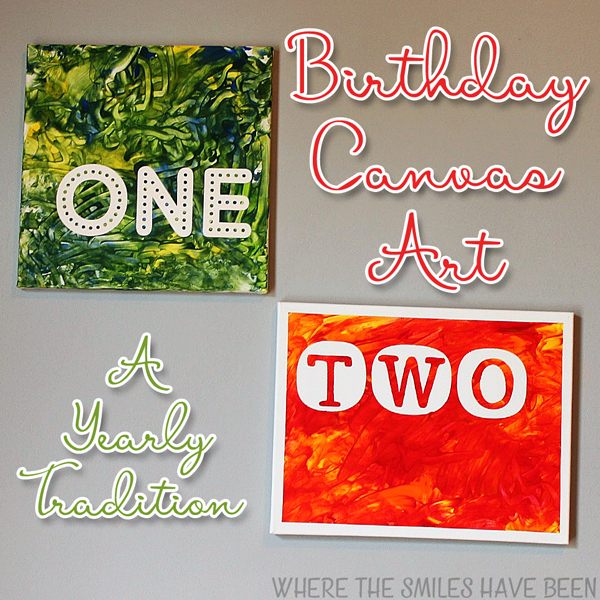 I ended up moving his newborn stats canvas to the other side of his dresser, so it now fills the empty space above his busy board.  I love all the pops of color against the neutral gray wall! 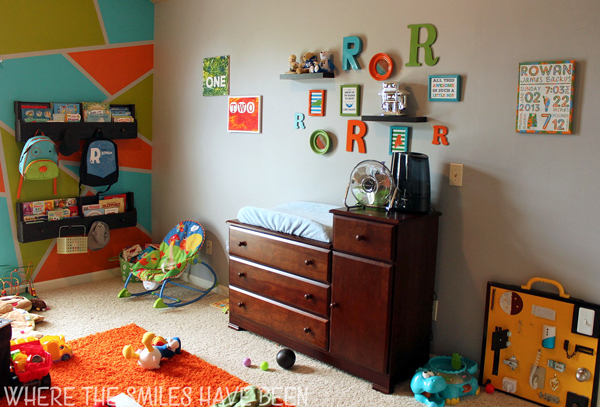 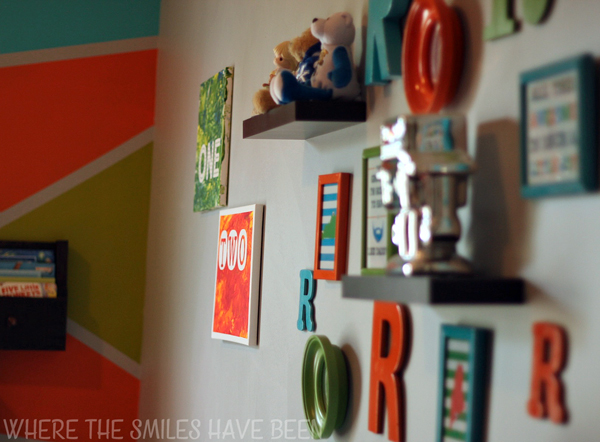 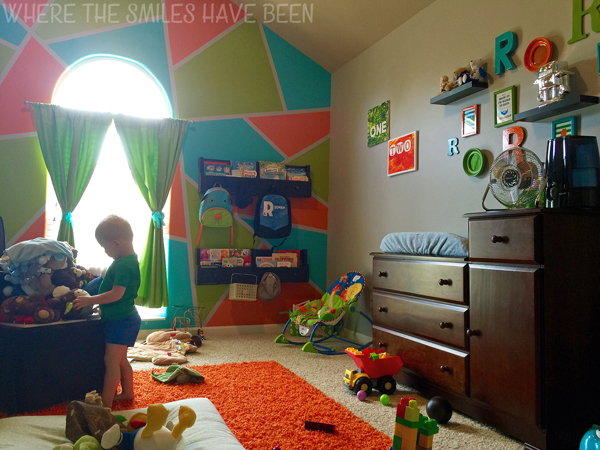 I love how we now have two of these completed and I’m looking forward to continuing this family birthday tradition….although I’m hoping for a more willing participant next year. ;) 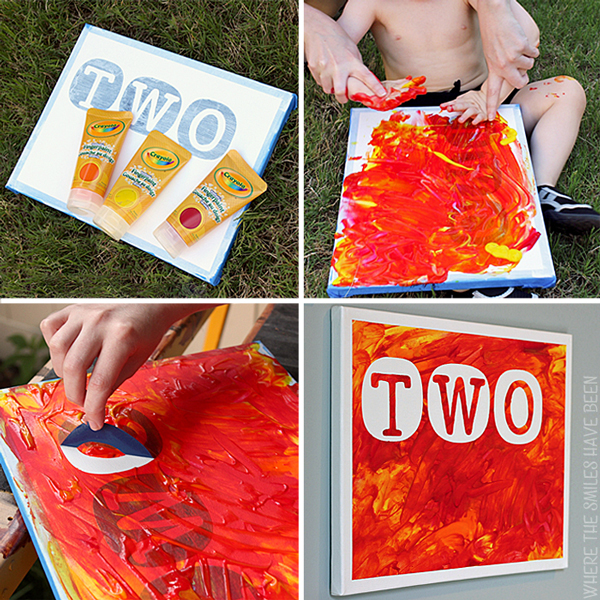 Other Decor Pieces in Rowan’s Room

Here are some other additions we’ve added to his room too! 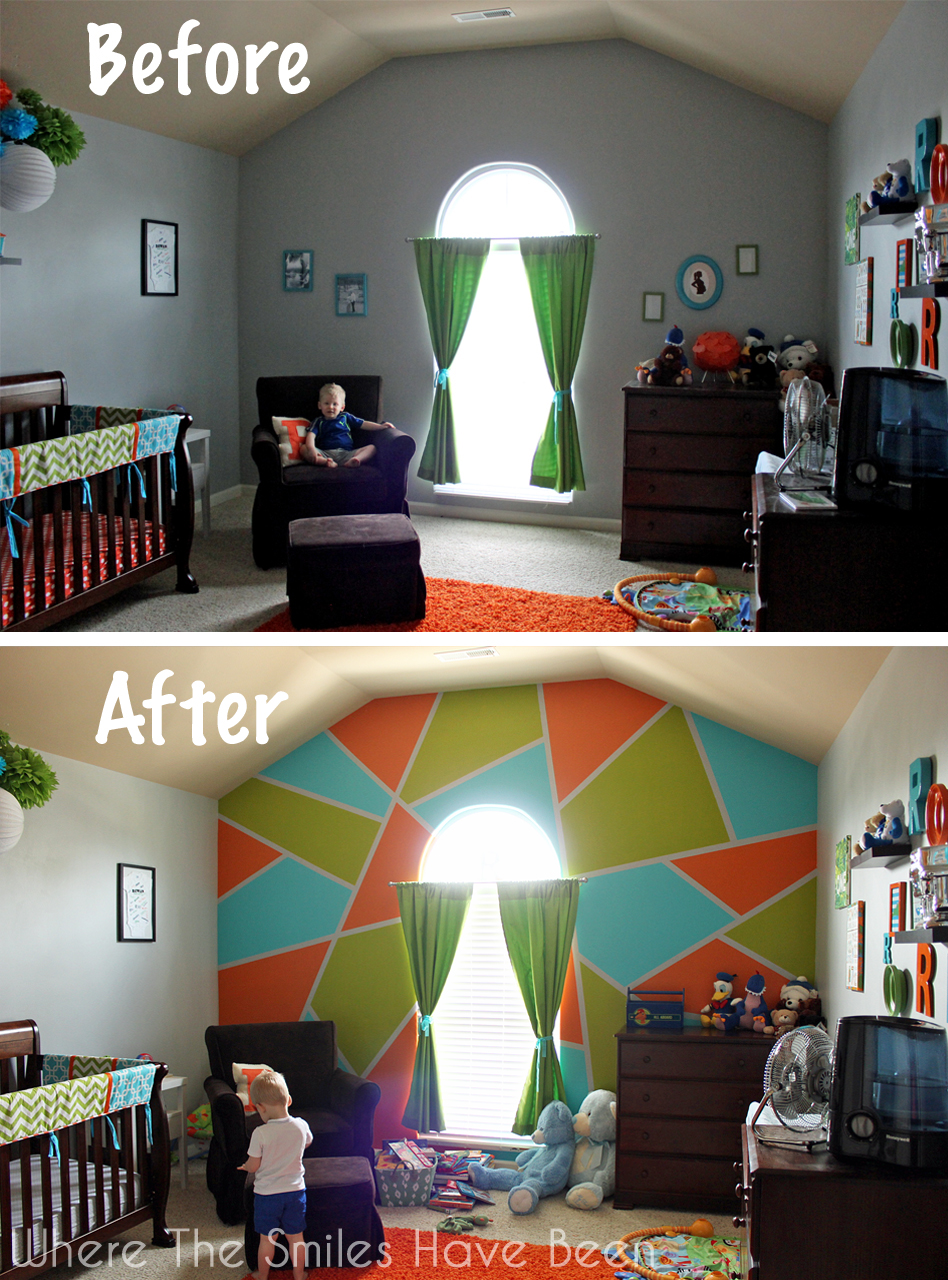 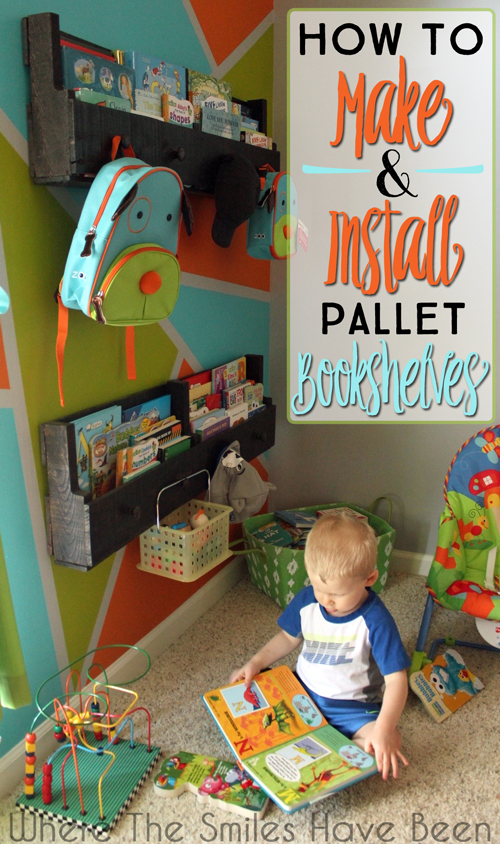 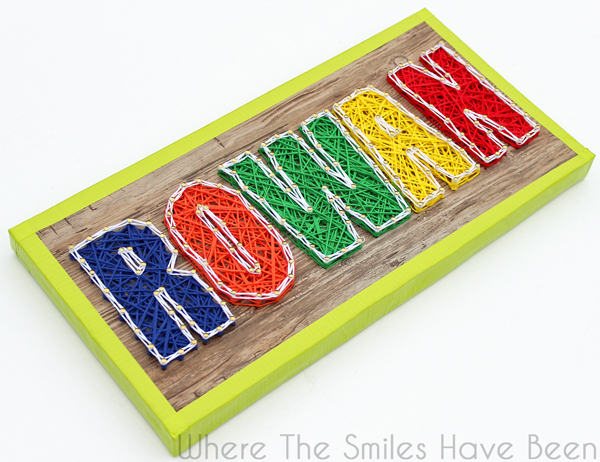 Hi Christine - what font did you use for the 2nd year artwork? It looks great!

Traditions are just the best, aren't they? Love this idea and must share with my friends! Thank you for linking up with #SmallVictoriesSundayLinkup 6/21/15

What a great tradition!! And your son is so cute!! Seeing these photos make me wanna sit on the floor and paint and have myself all dirty :)

This is such an awesome tradition Christine! Be prepared for the day when he won't want you to help him anymore. Independence is both a good and a bad thing. Love your sonogram photo display too.

Oh, I know what you mean, Kelly. He's already starting to show a little more independence every day. It's nice to see but still makes mommy here a little sad. I miss my little baby, but it's nice that he's growing up and becoming a little person. Thanks for the kind words!

This is a lovely idea! What cracks me up is your boy doesn't want to get his hands dirty but my girls I can't keep clean. If they even spy paint or markers anywhere, it's body art time! LOL. Thanks for linking up to the Bloggers Brags Pinterest Party. I have pinned to the Bloggers Brags Broad.

Haha, that is funny, Brandi! It's amazing to me at how much he hates getting his hands dirty. He loves bath time, swimming, and playing in his water table, but if he gets any food, paint, dirt, etc. on his hands, time has to stop until he gets them clean! Silly boy. ;) Thanks for sharing!